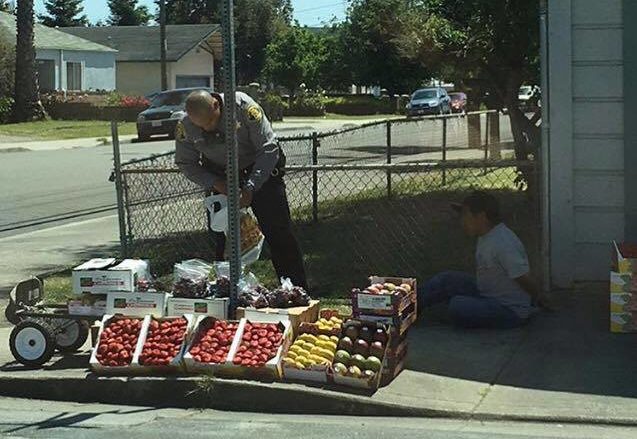 It is the simplest, most basic aspect of life: you need food, so you grow some vegetables. If you have extra you sell them on a street corner to your neighbors, and if you live in California you get arrested for it.

Licensing is when the government takes a right from you, and sells it back. This California man failed to purchase his rights back from the state.

But the poor police had pictures taken of them while arresting the man, and now they are hearing from the public about their unjust actions.

The Sheriff’s Department of Alameda County California responded on Facebook to the public outrage, including thousands of criticisms posted to their Facebook page.

There you have it, from the horse’s mouth in plain black and white: the point of licenses is protection. You pay to play, if you don’t pay off the city and county, they will send their hired thugs to rough you up and demand the protection money.

It harms local businesses: apparently it is the government’s job to make sure there is no competition for certain businesses. God forbid the consumer has a choice.

Simple because he didn’t pay for his rights.

Yet the Ninth Amendment in the Bill of Rights says, “The enumeration in the Constitution, of certain rights, shall not be construed to deny or disparage others retained by the people.”

And the 24th Amendment outlawed the poll tax, saying the right to vote had been abridged by charging citizens money in order to exercise that right.

Both of these amendments suggest that licensing–charging money for doing a normal activity, having to pay just to live your life–is one method of denying a person’s rights.

In Murdock v. Pennsylvania, 319 U.S. 105 (1943), the Supreme Court stated that a law requiring solicitors to purchase a license was an unconstitutional tax on the Jehovah’s Witnesses’ right to freely exercise their religion. The Court ruled that “The state cannot and does not have the power to license, nor tax, a Right guaranteed to the people,” and “No state shall convert a liberty into a license, and charge a fee therefore.”

In another case, the Court ruled similarly, that “If the State converts a right (liberty) into a privilege, the citizen can ignore the license and fee and engage in the right (liberty) with impunity.” (Shuttlesworth v. City of Birmingham, Alabama, 373 U.S. 262).

Earning money, engaging in basic trade, selling the excess of your labor all falls under the category of natural rights, the pursuit of happiness, liberty or whatever you want to call it. The government has no business arresting someone for selling vegetables.

The police don’t make the rules, they just enforce them. So at what point will a law become too unjust to enforce? At what point does a cop quit his job, because he is the agent of injustice? That is such a stupid attempt to absolve oneself of responsibility.

A police officer is an individual who can choose to do evil or not. Doing injustice to fellow human beings for a salary doesn’t make it any better. Following the orders of politicians doesn’t make a cop’s actions peaceful. Throwing people in cages for selling vegetables is a terrible thing to do as one individual to another, and one should not hide behind a badge, uniform, department, or politician while being a bad person.

Let’s look at the rest of the excuse given by the Sheriff’s Department.

Okay, getting a license doesn’t stop E. coli. There have been plenty of outbreaks in licensed food, as well as government-owned water supplies. This is simply a justification given for extortion. The government isn’t testing every veggie, and they aren’t watching every restaurant employee to make sure they wash their hands before returning to work–even if they make the restaurant hang the sign.

Ah, there you go! The police arrested the man to help him and protect him. They defacto robbed him (the costs of going through the legal system, as well as lost veggies, and lost revenue) in order to protect him from being robbed.

And they will just throw in a “traffic safety issue” for good measure. That farmstand is much more distracting than blinding blue lights flashed all over the city whenever someone is going 5 mph over the speed limit.

(On a side note, have you ever thought about how much more dangerous it is to be parked on the side of a highway after being pulled over, versus going 80 or even 90 miles per hour with the traffic?)

If the police would focus on solving the millions of rapes which they never investigate, or perhaps the 39% of murders that never get cleared, maybe their Facebook pages wouldn’t be bombarded by angry citizens as often.

The clear answer is to continue to resist and engage in your highly illegal selling of vegetables, and anything else, regardless of what the law says.Support the illegal farmstand on the roadside, and engage in gray and black markets with your community.

Support the illegal farmstand on the roadside, and engage in gray and black markets with your community.

In fact, a fun activity of resistance is to actively seek out opportunities to engage in unlicensed vending and trade. This strengthens the undocumented market.

The raw milk in my cereal was sold to me illegally, which makes it that much more delicious.