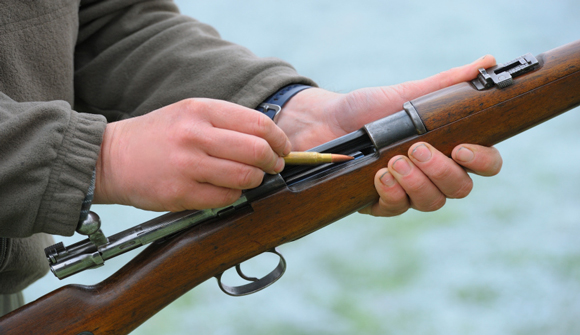 The NRA Comes Out in Support of Warrior Cops … The current issue of the National Rifle Association's American Warrior magazine just hit, and in it, the gun lobby comes out squarely in favor of warrior cops. An article titled, "If You Were a Cop, What Would You Drive?" opens with a photo of an armored personnel carrier-style vehicle juxtaposed with a Volkswagen van. Rick Stewart, the host of the NRA's Life of Duty Patriot Profile series, wonders, "Why should SWAT teams be forced to deploy in a glorified bread-truck?" (It is unclear why a hippie bus is the other alternative.) – Mother Jones

Dominant Social Theme: Police need to be militarized in the US.

Free-Market Analysis: This article in Mother Jones shows us how even organizations that might be expected to protect civil rights in the US are co-opted by the trend toward police militarization.

The NRA has long stood as a bulwark against US fedgov overreach when it comes to firearms; the NRA has certainly resisted overly aggressive encroachments on gun rights based on the idea that citizens have the constitutional right to arm themselves.

Of course, as we have pointed out, there is a hidden side to the NRA based on its historical antecedents. The NRA was founded by Northern Civil War vets and has always walked a fine line between advocating for citizen gun rights and acquiescing to what it considers to be the legitimate demands of the federal state.

In this case, the statist, authoritarian side of the NRA seems to be winning out. Here's more from the article:

… As Stewart coyly acknowledges, "For many there is a certain Orwellian level of mistrust in government and law enforcement." Yet the NRA is also a trade lobby for firearms manufacturers, which may explain its soft stance on the militarization of American police.

As I detail in the current issue of Mother Jones, a multibillion dollar industry has sprung up to provide ever-bigger weapons and military-style equipment to law enforcement. Since 2002, the Department of Homeland Security has given local police departments $41 billion to buy new gear. This puts the NRA in a tricky position.

Ever since the Ferguson protests, people from all political persuasions have become wary of efforts like the Pentagon's 1033 program, which has transferred $5.1 billion worth of equipment to local law enforcement. Stewart's article makes the NRA's position on 1033 clear: "The program is not evil; it is responsible."

He also defends the police's use of camouflaged battle dress "for tactical advantage," especially for those who "serve on the frontline of illegal activity along our southern border." It is "unconscionable," he maintains, to make cops wear their "everyday duty uniforms" in "extremely dangerous situations"—such as protests.

The American Warrior article depicts police as victims: "Nobody seems more 'targeted' these days than those who serve in law enforcement." Not the communities where SWAT teams are routinely deployed; not people of color, who are targeted in 71 percent of SWAT raids even though whites are more likely to be active shooters or hostage takers.

The fact is police work is safer than it's been in decades. Assaults on cops are down 45 percent since their peak in 1971. Violent crime has fallen by nearly half since 1991.

Stewart seems to be mixed up when he tries to document the reasons why US civil and municipal police need SWAT-style military weapons. Like others justifying these programs, he justifies them by explaining that police are in pursuit of drug dealers, illegal aliens and others who are or could be involved in violent episodes with authorities.

Given the reality – the paucity of such incidents – Stewart's reasoning sounds more like a series of justifications than anything else. For a more realistic look we can turn to various media reports examining this disturbing trend. In August, Vox posted an article entitled "Why America's police forces look like invading armies" that examined the evolution of municipal militarization through a historical lens. Some excerpts:

The Department of Defense Excess Property Program, usually known as the "1033 program," distributes surplus military equipment to state and local law enforcement agencies for use in counter-terrorism and counter-narcotic activities. Put another way, this means that the US military is giving its weapons to cities and states, with the express intention they be used on American citizens, in the course of local police work.

The 1033 program's roots lie in the drug war — hence the counter-narcotics impetus. It was originally created in 1990, as part of the National Defense Authorization Act, which authorized the Pentagon to transfer military equipment to local law enforcement if it was "suitable for use in counter-drug activities." In the wake of the September 11 attacks, the program's focus has expanded to include counter-terrorism activities as well.

While the 1033 program's intent may have been to equip specialized units for extreme, dangerous situations, fighting al-Qaeda sleeper cells, or powerful drug cartels, the effect has been to incorporate SWAT-style raids into ordinary police operations. That includes, but is certainly not limited to, the serving of search warrants. This may partly be because the program requires that all equipment issued through the 1033 program be used within one year of the date it is granted. That means that if police departments want to keep their new gear, they can't wait for a rare emergency like an active shooter or hostage situation in order to use it.

It is likely that the 1033 program is the source of some of the equipment being used in the streets of Ferguson. In the past two years alone, according to a list obtained by Newsweek, the 1033 program has provided St. Louis County law enforcement agencies with vehicles, gun sights, night vision equipment, an explosive ordinance robot, and more.

… Other federal programs add to the effect. The Edward R. Byrne Justice Assistance Grant program gives state and local governments funds to improve the functioning of their criminal justice systems and to enforce drug laws. Most of that money goes to law enforcement, including weapons purchases. "In 2012-2013," the ACLU reports, "state and local agencies used JAG funds to purchase hundreds of lethal and less-lethal weapons, tactical vests, and body armor."

Likewise, the Department of Homeland Security has programs like the State Homeland Security Program and the Urban Areas Security Initiative that provide money to police but requires they spend at least 25 percent on "terrorism prevention-related law enforcement activities."

We can see from the above that what has been taking place in the US regarding its police forces is not merely the result of a single miscalculation. When so many different fedgov agencies are involved in providing military equipment to civilian police forces, there is obviously some sort of coordinating authority – even beyond congressional authorizations.

Obviously, elements of US ruling elites fear the citizenry and are afraid of what might happen if a socioeconomic crisis escalates out of control. Additionally, as has been noted here and elsewhere, US authorities fear US veterans. These individuals are logical leaders for local and national insurrections.

For most of us, especially those with means, escalating civil militarization in the US inevitably leads to the conclusion that holding assets outside of the United States is at least a logical reaction to what is going on internally.

For a variety of reasons, US authorities are increasingly suspicious of the citizens they are supposed to "protect and serve" – and arrogant, as well. It is not a combination that ends well.

Holding physical gold and silver at home or abroad along with second homes and other property abroad (farmland comes to mind) is one prudent way of diversifying personal and familial risk. The US – the West in general – is increasingly invasive when it comes to abrogating the civil rights of citizens.

Personal and professional asset allocation is called for in order to preserve prosperity and protect what is valuable … and precious. The NRA's shifting rhetoric illustrates this once more.