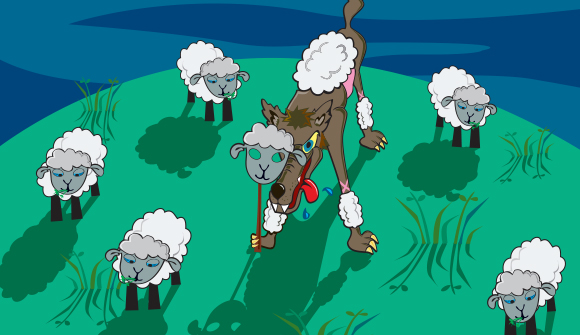 Trusting in our new security state … Big data? No. Vast data, enormous data, unimaginably colossal data ties our world together. Some have said it also ties us down, since departments like the National Security Agency are combing through a part of our huge reservoir for intelligence on foreigners who might threaten the U.S. Yet this behavior is now the status quo, one that will not go away, nor diminish. It's a doleful one if you deem it an open invitation to 1984-style tyranny, or an exhilarating one if you see a world of ever-expanding knowledge and opportunity. Regardless, data culture is growing at a stupefying rate. − Reuters

Dominant Social Theme: Being spied on all the time is uncomfortable but we need to learn to make the best of it. When life hands you lemons, make lemonade.

Free-Market Analysis: In our quest to analyze the mainstream media's dominant social themes, we sometimes discover ones that surprise us. This is such a time.

This Reuters article makes the case that one need not determine whether what is going on in the Western world regarding snooping is good or bad. One simply needs to figure out a way to live with it.

According to Reuters, this process may be "exhilarating." The article suggests that new government agencies ought to be put in place – perhaps an ombudsman to supervise government collection of secret data to ensure that these data are not abused.

But most importantly, we need to make a decision to "trust" big government in a mature and dispassionate way. If we don't provide a measure of trust, we will not have the right psychological frame of mind to work on realistic solutions. Here's more:

To live outside of this networked world we would need to live in isolation, growing and hunting your own food without utilities. Or we would have undergone a catastrophe, the kind of thing contemporary dystopian fiction likes to conjure up. Since few of us want to try the first and none of us wish to be victims of the second, we're stuck in the Net.

To adapt, we must trust. We have to trust the state, the government, the politicians, the businesses, the bureaucracies, the police, the security forces, the journalists and, yes, ourselves. We've become used to believing that trust in public figures and institutions is a dwindling commodity, a precipitous falling away from what we used to have so much of, at least in some things and some people. How do we acquire it again?

We need to realize that trust is a relationship. Trust needs work, from us. We need to hold the powers that be to realistic account, which means we must understand what is reasonable to ask of them, and how much we are prepared to engage, or give up, or pay, in order to get it.

But we can't trust in ignorance, or we are simply being naïve … we need to somehow grasp the size of the data or we become immensity's victims: we need to pioneer something like an Open Digital University, a resource available to all which will take us through at least the lower slopes of understanding of what our modern, connected universe is – building on courses that our kids get at school.

Further, since our democratic and political systems depend on representatives and officials who know how to navigate the Internet, they have to be trained in the ways of digital democracy – with the accent on the second word. They must know not just what the great banks of information, public and private, have on us. They must also assure us that this information is safeguarded, open to inspection and as transparent as possible. They have to be our guardians and pathfinders in this world. So must the news media.

In a larger sense, this meme is one that we have been tracking for a long time, in our view. The solutions being offered have been proposed before.

We have a hard time granting the efficacy of either of these proposals. Government has a monopoly over force and thus, purging corruption from it is basically impossible.

The only thing that really helps is shrinking government but that is not what this article is arguing. In fact, it is urging us to make our peace with big government by taking a calculated leap of faith.

Making government more transparent is a very good idea but how do we generate transparency into Leviathan? The same difficulties that have engendered corruption and created the initial spying culture are going to militate against the injection of any meaningful transparency.

We would like to take the advice of this article, but we are having a hard time with it. It suggests that revelations about illegal snooping ought to precipitate a determination to trust government MORE.

No matter how we try to rationalize this, it seems to us to be a contradiction in terms.