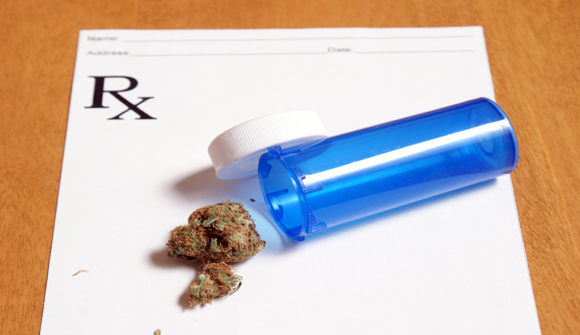 A mother who uses medical marijuana to treat a chronic illness had her son taken from her recently after the child spoke up at his school about the health benefits of cannabis.

On April 13, respected investigative journalist Ben Swann broke the heartbreaking story of Shona Banda, whose son was taken from her by Kansas Child Protective Services in late March after the 11-year-old boy spoke positively of medical marijuana at his school.

Banda's nightmare began on March 24, when her son attempted to correct some misinformation that his school counselor was telling his fellow classmates about marijuana.

Banda has been successfully using oil made from marijuana to treat her Crohn's disease. Even many establishment doctors agree that cannabis oil is an often effective way to treat a variety of illnesses without the usual side effects associated with more mainstream treatments.

Twenty-three states and Washington, D.C. have laws that decriminalize marijuana to varying degrees. For instance, in California, medical marijuana is legal and commonly used by patients for a variety of illnesses, including cancer and anxiety. Across the country, in Maryland, possession of small quantities of marijuana is considered a civil offense that is punishable with only a fine.

Marijuana is still strictly verboten in Kansas. Possession of any amount of marijuana is a misdemeanor crime – even on the first offense – and is punishable by up to one year in jail or a $2,500 fine.

In Banda's case, even talking about marijuana can get you in trouble with the brownshirts in Kansas.

According to Swann, after Banda's son spoke out in defense of medical marijuana, he was "detained" by police. Law enforcement then conducted an armed raid on Banda's house.

"They pulled my son out of school at about 1:40 in the afternoon and interrogated him. Police showed up at my house at 3… I let them know that they weren't allowed in my home without a warrant… I didn't believe you could get a warrant off of something a child says in school. We waited from 3 o'clock until 6 o'clock. They got a warrant at 6 o'clock at night and executed a warrant into my home. My husband and I are separated, and neither parent was contacted by authorities before [our son] was taken and questioned.

"They subsequently conducted a raid and then called me when the raid was over letting me know that there was a list of items they took on my kitchen table, I was allowed to go home, and [an officer] gave me his word I would not be arrested in person or at work and that charges would be given to me in a postcard in the mail. I have not been charged with anything at this point, but I have a hard time believing that it's okay for them to interrogate my child without parental consent for hours."

What followed is even more horrifying, according to Banda.

"On the 24th, he was taken into custody," said Banda. "That was on a Tuesday. He was taken out of town Tuesday, Wednesday and Thursday. Friday we had a temporary hearing… and temporary custody was granted to my ex. Now, the only reason why temporary custody was granted to my ex is because the judge said something to the effect that the amount of cannabis found in my home was going to possibly be felony charges and it was pointless letting the child return home to his mother… The state is trying to deem it to where [Shona's ex-husband] is not fit and I'm not fit, and they're trying to take custody of our child."

Whatever one believes about marijuana's effectiveness in treating disease, the idea of the state having the absolute power to kidnap a child and then conduct an armed raid on his parent's home – all because the kid opened his mouth about marijuana – should terrify every American.