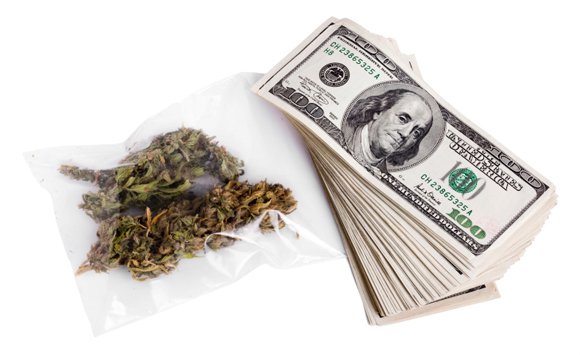 Black market boom lays bare a social divide in Colorado's marijuana market … Nascent cannabis industry splits between wealthy with clean criminal records and those who turn to less than legal methods … The red card – part of the state's legal landscape since 2000 when voters approved the sale of marijuana for medical use – allows the grower to cultivate a doctor-prescribed 16 plants. It does not allow him to sell what he does not consume to the underground market. It does not allow him a second grow operation in another rented house where he and a partner grew 55 plants until the landlord grew suspicious. It does not allow him to run his own little corner of a black market that still exists in the state with America's most permissive legal pot sales. The grower says he recently sold more than 9kg of his weed – Blue Dream for the mellow, Green Crack for the perk – to middlemen who flipped it for almost double the price. "I try to keep it legal," he says, "but sometimes it's illegal." — UK Guardian

Dominant Social Theme: Once marijuana is legalized, growers can shed their black-market participation.

Free-Market Analysis: This article in the UK Guardian profiles black- and gray-market growers in Colorado's booming post-prohibition marijuana environment. Unsurprisingly, it finds that decriminalization has not undone illegal acts nor removed the financial incentive from them.

This is because – as free-market economists know – distortions create price opportunity. When prices are "fixed" by laws and regulation, then the opportunity to exploit price differentials between legal and illegal products exist.

The more that price discovery can operate in the "sunshine" of the legal environment, the less the price differential shall be. Surely the goal is to minimize the differential in such a way that incentives to deal illegally lose their luster?

The Guardian article seems to indicate that time has not yet come:

Camouflaged amid the legal medicinal and recreational marijuana market, the underground market thrives. Some in law enforcement and on the street say it may be as strong as it's ever been, so great is the unmet local and visitor demand.

That the black market bustles in the emerging days of legalisation is not unexpected. By some reckonings, it will continue as long as residents of other states look to Colorado – and now Washington state – as the nation's giant cannabis cookie jar. And, they add, as long as its legal retail competition keeps prices high and is taxed by state and local government at rates surpassing 30%.

"I don't know who is buying for recreational use at dispensaries unless it's white, middle-class people and out-of-towners," said Rudy Reddog Balles, a longtime community activist and mediator. "Everyone I know still has the guy on the street that they hook up with."

This black market boom, the state argues, is a temporary situation. As more legal recreational dispensaries and growers enter the market, the market will adjust. Prices will fall. The illegal market will shrink. In any case, these first curious months of the legal recreational market have laid bare a socioeconomic faultline. Resentment bubbles in the neighbourhoods where marijuana has always been easy to get.

The resentment goes something like: we Latinos and African Americans from the 'hood were stigmatised for marijuana use, disdained and disproportionately prosecuted in the war on drugs. We grew up in the culture of marijuana, with grandmothers who made oil from the plants and rubbed it on arthritic hands. We sold it as medicine. We sold it for profit and pleasure. Now pot is legalised and who benefits? Rich people with their money to invest and their clean criminal records. And here we are again: on the outskirts of opportunity.

A legion of entrepreneurs with big plans and rewired basements chafes with every monthly state tax revenue report. Ask someone who buys and sells in the underground market how it has responded to legalisation and the question is likely to be tossed back with defiance.

"You mean, 'Who's been shut out of the legal market?' " asks Miguel Lopez, chief community organiser of the state's 420 Rally, which calls for legalisation of marijuana nationally. "It's kind of like we made all the sacrifices and they packed it up and are making all the money," says Cisco Gallardo, a well-known gang outreach worker who once sold drugs as a gang member.

We've already written about this: The "war on drugs" continues to be a brutal one that has exacted many human casualties. It's only natural that resentment should linger. For decades, the state has decided families should be uprooted and lives put into abeyance by incarceration; now it has decided otherwise, at least in two jurisdictions, and a whole "underclass" remains irritated. Who can blame them?

The mainstream media has glossed over this issue and treated the end of marijuana prohibition as a logical outcome of anti-prohibition forces. But regardless of how the current situation has occurred, it is bound to have lingering impacts on people's perception of the US criminal justice system, as will continued gray- and black-market prosecutions.

Social engineering and legal re-engineering has consequences. It's easy to see from the current social scene that both Europe and the US have significant issues when it comes to social unrest. Simply ignoring causation won't diminish the resentment or dispose of the idea that something is significantly unfair with Western "justice."

This is an important concept, one that could haunt marijuana legalization in years to come. The most efficacious way of dealing with lingering hostility as well as the rhetoric of injustice is to make marijuana as competitive as possible by regulating it as little as possible.

The fewer regulations piled onto marijuana, the less powerful the incentives will be to continue black-market operations. But if laws and regulations remain onerous – or subside and then grow again – the issue of "illegal" marijuana will continue to plague growers and users alike.

Here's hoping the "dead hand" of regulation and law will rest lightly on the industry as it makes its way forward. It would be a shame if the end of prohibition saw an increased volume of legal product alongside a renewed battle against illegal cultivation and use.