EDITORIAL
A Happy New Year and Many New Schemes!
By Anthony Wile - December 31, 2011

First, allow me to wish all our readers and viewers a happy new year. This has been a year of growth for our modest publication, and we regularly receive upwards of 20-25 million hits a month. I hope your endeavors have achieved even greater success – however you measure it – in a difficult economic environment.

We've wanted to be part of what we knew would be an important, emergent conversation in this era of the Internet. We wanted the ability to provide input because we are free-market oriented; too often the reality of free-market arguments (as opposed to a merely cosmetic display) are insufficiently argued. The powers-that-be don't like competitive markets and will do almost anything to downplay them and confuse people about their reality.

Thus, predictably, we've ended up on the "bleeding edge," defending libertarian ideas from the many well-meaning "big thinkers" that have "better ideas" on how to run society and create a fair money supply that will not oppress people.

Years ago, reading Murray Rothbard, it seemed fairly self-evident to me: Only the market could decide what was best for people and money. But inevitably people themselves interfere with this idea!

There are so many people who have a way … a better scheme. Too often, they want to use force to achieve it. Too bad. People lack historical memory. We are born and die almost in an instant and are prone to all sorts of misperceptions in the meantime. This is especially evident when it comes to money.

Money is THE most important element in a fair society and, if abused and perverted, can lead to untold misery. In the modern day, it has given rise – thanks to the current Internet Reformation – to a number of alternative money perspectives, many of which go out of their way to disintermediate gold and silver for some reason.

The idea apparently is that gold and silver give powerful people an unfair advantage within the context of a monetary system. We are not so sure. Gold and silver artifacts have been dated to thousands of years ago. The instinct to treasure gold and silver is not, say … a Zionist plot. "Banksters" did not invent man's attraction to money metals.

But there it is. Thanks to Ellen Brown and others (we predicted it almost three years ago now) the idea that people can "print" their way to prosperity has made a comeback. Whether it is "social credit" (the most recent eruption) or "greenback"-ery or even the idea of central banking (in its current incarnation), people are endlessly convinced that money can simply be printed and acquire inherent value.

Of course, there is nothing that disallows people from believing money is anything they wish it to be. In fact, Austrian free-market theory provides this illumination. If people want to use sand as a conduit of value they're welcome to do so.

But that is a far cry from using the force of government to create a consensus as to what money is. Many of these schemes seem to mandate that people need to be forced into using some sort of currency for their own good. Everybody has a better idea on how to "organize" society so there is no want nor sickness.

In fact, there ARE no better schemes. The best scheme is "none at all." This is perhaps the default that will be realized as the CURRENT scheme collapses into chaos – including central banking. Once that happens, people may be free to adopt what seems to be most logical to them without the recommendations of the "wise men."

What would a free society look like in reality? Well, absent military coercion of the many by the few, human beings would tend intimately to relate to about 150 others … that's the biological limit, apparently. And groups of people would probably relate to other groups of people informally – regionally and nationally.

Business would relate similarly in flexible partnerships. If there were corporations, they might be more constrained than currently as people would have to agree voluntarily to their formation and stipulations.

Such a society would likely be more rural and agrarian than current socialites. Cities might be smaller. Populations might be further dispersed. Innovation actually might be increased as there would be no system of patents to retard innovation.

People would have to enforce their own intellectual copyright on an ad hoc basis rather than turning to the state to do it for them. Pop stars, therefore, would tour a lot more. Actors would not make so much money and would have to perform on stage for a living. The salaries of sports stars might be similarly downgraded. Generally, the pools of money available to people would shrink. Disparities of income might lessen.

Ironically, within the ambit of this sort of anarchical relationship there would be no need to specific national geographies. People would define their nationality by language probably, but the physical reality of nation-state borders probably would not be necessary.

Would there be a necessity for taxes? Probably not. Taxes were initially tributes, so far as we can tell, and have little or no relevance to the creation or upkeep of public facilities. Most governments, in fact, are very bad at planning for the upkeep of the vast public works created with initial taxes. It would be preferable to let private industry create necessary infrastructure. But then government could not collect taxes or generate the bureaucratic snooping that often accompanies them!

Importantly, state-run monopoly public justice would be a thing of the past. Instead of having the state create laws via legislatures, and enforce laws via state supported police, courts, judges, prosecutors and penitentiaries, people would return to the laissez faire justice that worked well for so long.

Such lower-case common law legal systems have been prevalent throughout the history of humankind for tens of thousands of years. People protected themselves via elaborate dueling mechanisms, the threat of vendettas and, of course, by turning to wise men or judges-for-hire to settle disputes. There was no need for elaborate incarceration measures and no vast penal system to impoverish and ruin families forever. 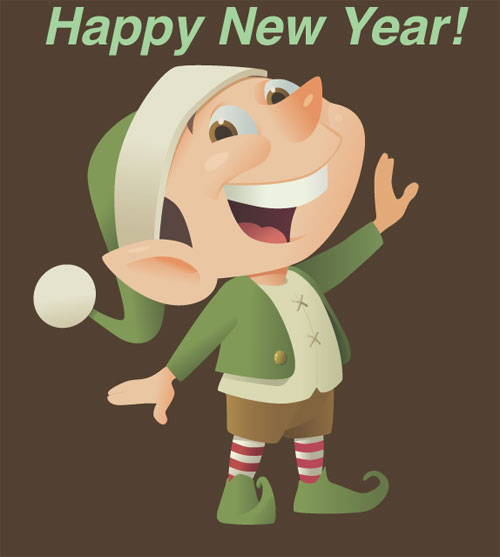 Military defense, as well, might be created via informal liaisons on an ad-hoc basis as they have in the past. Wars of aggression would surely be less tempting, as these enrich the few at the expense of the many.

Notice we are not presenting a scheme, dear reader. We are merely suggesting what a society might look like in lieu of the full collapse of the current one. There ARE other ways of living and producing – and of using money. But probably the best that can be hoped for is that some of the current viciousness and centralization of the powers-that-be is ameliorated following any collapse.

In such a situation, groups of people would develop their own solutions over time, as they have in the past. I think we'd be surprised by what we might see, though I would venture a guess that gold and silver would figure in many monetary structures as they have before.

Happy New Year! May this next year bring you prosperity and progress in realizing your personal and familial goals. Take human action and remain positive and energized.