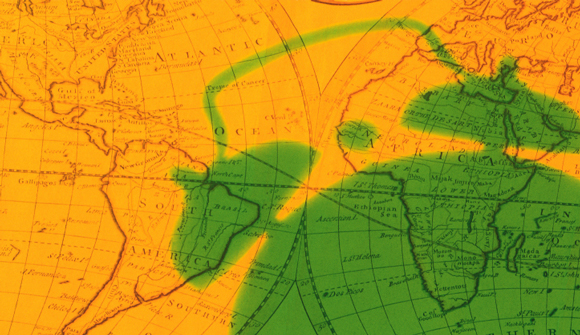 Common Dreams has posted an article entitled, "In Just 60 Years, Neoliberal Capitalism Has Nearly Broken Planet Earth …" The idea according to researchers at the Stockholm Resilience Centre is that "four of nine planetary boundaries have now been crossed as a result of human activity."

We've spoken of these kinds of memes before. They are portmanteau memes in the sense that they combine various promotions. In this case, the memes are oriented around scarcity but are put together in a way intended to reinforce each other.

The language is unrelentingly dramatic. The warning is inflammatory and the intention is to generate a call to action. The intended results would surely involve increased regulation and perhaps global taxation.

I'm all for "sustainability" and for a reduced human "footprint" on the Earth but these articles make me queasy because I understand they are being generated for a purpose and often they are not entirely honest.

Humanity's rapacious growth and accelerated energy needs over the last generation — particularly fed by an economic system that demands increasing levels of consumption and inputs of natural resources — are fast driving planetary systems towards their breaking point, according to a new pair of related studies.

Prepared by researchers at the Stockholm Resilience Centre, the first study looks specifically at how" Published in the journal Nature on Thursday, the 18 researchers involved with compiling evidence for the report — titled 'Planetary Boundaries 2.0′ — found that when it comes to climate change, species extinction and biodiversity loss, deforestation and other land-system changes, and altered biogeochemical cycles (such as changes to how key organic compounds like phosphorus and nitrogen are operating in the environment), the degradation that has already take place is driving the Earth System, as a whole, into a new state of imbalance.

"It is difficult to overestimate the scale and speed of change. In a single lifetime humanity has become a geological force at the planetary-scale … Transgressing a boundary increases the risk that human activities could inadvertently drive the Earth System into a much less hospitable state, damaging efforts to reduce poverty and leading to a deterioration of human well-being in many parts of the world, including wealthy countries," said Professor Will Steffen, a researcher at the Centre and the Australian National University, Canberra, who was lead author for both studies.

In addition to the four boundaries that have already been crossed, the study looked five other ways in which the planetary systems are under assault by human activity. They include: stratospheric ozone depletion; ocean acidification; freshwater use; atmospheric aerosol loading (microscopic particles in the atmosphere that affect climate and living organisms); and the introduction of novel entities into ecosystems (e.g. organic pollutants, radioactive materials, nanomaterials, and micro-plastics).

"I don't think we've broken the planet but we are creating a much more difficult world," Sarah Cornell, another report author, told Reuters.

Call this the "tipping point" meme. An aggregation of previous memes, it begins to sound like a new form of alarmism. This larger meme is focusing on "planetary boundaries" and how they have been crossed. Johan Rockström, executive director of the Stockholm Resilience Centre, explained the concept to Wired magazine last year:

Using what it calls a "planetary dashboard," the research charts the spread and speed of human activity from the start of the industrial revolution in 1750 to 2010, and the subsequent changes in the Earth System – e.g. greenhouse gas levels, ocean acidification, deforestation and biodiversity deterioration.

The analysis found that increased human activity — and "predominantly the global economic system" — has unseated all other factors as the primary driver of change in the Earth System, which the report describes as "the sum of our planet's interacting physical, chemical, biological and human processes." The most strikingly "accelerated" changes to that system have occurred in the last 60 years.

"It's clear the economic system is driving us towards an unsustainable future and people of my daughter's generation will find it increasingly hard to survive. History has shown that civilizations have risen, stuck to their core values and then collapsed because they didn't change. That's where we are today."

The really alarmist quote is this one: " 'It is difficult to overestimate the scale and speed of change. In a single lifetime humanity has become a geological force at the planetary-scale,' said Steffen, who also led the Acceleration study."

The article goes on to characterize the culprit as the "dominant economic model — a globalized form of neoliberal capitalism."

This capitalism "is based on international trade and fueled by extracting and consuming natural resources." Additionally, this model is only dated to the middle of the 20th century and the most dramatic "shifts" have occurred since 1950. Thus, 1950 marks the beginning of something called the "Great Acceleration."

What's the import? According to Steffen, "This is a new phenomenon and indicates that humanity has a new responsibility at a global level for the planet."

The article predictably points a reproving finger at Western culture and populations. But surprisingly, it also warns about how the BRICs are adopting the Western model and thus proving "an increasing threat to the planet as the consumer mindset … particularly the US, spreads."

Steffen again: "It's clear the economic system is driving us towards an unsustainable future and people of my daughter's generation will find it increasingly hard to survive. History has shown that civilizations have risen, stuck to their core values and then collapsed because they didn't change. That's where we are today."

And the article concludes there are "tipping points" that humans should not "want to cross."

As I mentioned earlier, articles like this make me somewhat queasy because they seem to distort real problems and threaten solutions that will simply inflict more command and control, taxes, regulations, etc.

It is the central banking economy that is leading to much of the excess and wasteful consumerism that the article and researchers are concerned about. But there is no hint that excess money leads to excess consumption. There is no talk here at all of the West's dysfunctional banking and corporate system.

Get rid of the judicial force that props up multinational corporations and central banks alike and you would go a long way to addressing the concerns mentioned in the article and expanded on in the study. But none of that is mentioned.

Instead, we hear the steady drumbeats of alarmism. And now it has taken on a distinctly global character. Bad enough when the alarmism supported additional regional or local taxes and regulation. There are never any solutions offered that I can tell, other than the vague suggestion that authorities must eventually make dramatic moves to change culture and behavior around the world.

Hopefully, it won't come to that. There are other ways to create change. On a personal level, the best way to prepare for sociopolitical and economic actions taken as a result of these alarmist themes is to create a presence in more than one country.

Second homes and passports, physical gold ownership, access to healthy food and clean water, all these are more important than ever to assure the safety and well-being of your loved ones.

The more global the alarmism grows, the more important it is to sustain your own international presence as best you can.