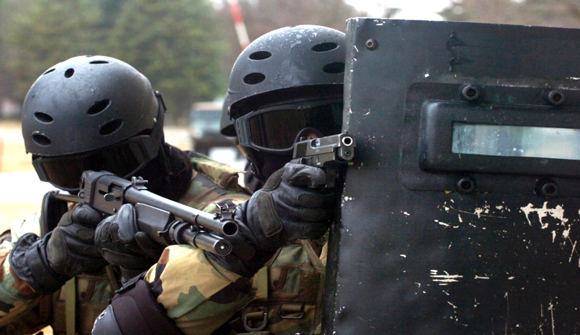 Clinton Goes Commando, Sells Diplomats as Shadow Warriors … Clinton, wearing pearls and a silver and black blouse, climbed the stage and began to speak. And soon it all made more sense. She had an idea to sell — and to defend … She described a vision in which shadowy U.S. and allied Special Operations Forces, working hand in hand with America's embassies and foreign governments, together play a key role in preventing low-intensity conflicts. And where prevention fails, the same commando-diplomat team goes on the attack … – Wired (5/24/12)

It happened again at the recent Tampa-based conference, "Building the Global SOF Partnership" …

The US military staged a mock drill in violation of 130+ years of the Posse Comitatus Act that bars domestic forces from active use on US soil.

It wasn't just the US, either. Some 90 nations supposedly participated in the drill, which aimed to "rescue" Tampa Mayor Bob Buckhorn, supposedly kidnapped by terrorists. There were helicopters overhead and a tactical assault showed up by water. Then special ops teams invaded a "terrorist village" near the Convention Center and rescued the mayor, who said he was grateful.

The ongoing militarization of all phases of US society via Homeland Security searches and military training exercises surely should be of concern to those who are searching for a less warlike and aggressive United States.

But the pendulum apparently continues to swing in the other direction. While the mock drill received a lot of attention in the alternative media, statements of the guest of honor, Hillary Clinton, are worthy of equivalent concern.

The Secretary of State seemed to inform the conference that the State Department now had the unilateral authority to declare a limited state of war via an expanding liaison with US Special Operations Forces. Here are some direct quotes:

… We created a new Bureau of Conflict and Stabilization Operations that is working to put into practice lessons learned over the past decade and institutionalize a civilian surge capacity to deal with crises and hotspots.

Experts from this new bureau are working closely with Special Operations Forces around the world … Our diplomats also saw that the UN staff in the region could be useful partners. So they worked through our team in Washington and New York to obtain new authorities for the UN officials on the ground and then link them up directly with our Special Operations Forces to share expertise and improve coordination.

The State Department and US Special Ops – a new, unelected and unaccountable power in the world? It is broader still …

We have to keep our international cooperation going and growing at every level. Next week I'll be heading to Europe, and I'll end up in Istanbul for the second meeting of the new Global Counterterrorism Forum, which we helped launch last year. Turkey and the United States serve as the founding co-chairs, and we've been joined by nearly 30 other nations.

Who has given Ms. Clinton the brief to do such things? She characterizes these conflicts as low level but there are no guarantees they will stay that way. And what are the criteria for her mandates? And who is she to consult with? Constitutionally, only the US Congress has the right to commit US troops to war.

US President Barack Obama, through surrogates such as Defense Secretary Leon Panetta, is now claiming that his administration can commit US forces based on international (UN) mandates and the like. Congress is to be consulted only secondarily. But Clinton seems to be taking it a step further. She apparently wants the personal power to do the deed.

There are voices raised generally against these sorts of declarations. At the highest level, libertarian/GOP Congressman Ron Paul (R-Tex) has used his presidential campaign to demand that the US bring home its troops and special agents from nearly 1,000 bases worldwide.

This would not suit Clinton, who is a globalist with a book to her credit entitled, It Takes a Village. She knows full well that there are plenty of questions about the so-called "war on terror" but gives credence to even its most questionable elements.

Pakistan-oriented "Opinion Maker" posted an article ("Clinton Bares All") shortly after her speech. Here's the conclusion:

Today the diplomatic meddlers have networks of NGOs (non-governmental organizations) to assist them with the process of spreading the "pork" locally and creating new false narratives which mirror the latest fashionable lies being peddled by Washington's other sources.

You see the process most completely in the fate suffered by Libya, or Syria, or that visited upon the people of Iraq. At the end of the "smart" process is nothing but war and local devastation giving the US and NATO military a foot in the door.

Now Ms. Clinton has proclaimed the right to direct that "foot in the door." The civilian and military conversation in the US is moving steadily in the wrong direction.

This should be of concern not only to US citizens who want a less warlike US but also to the world community at large.