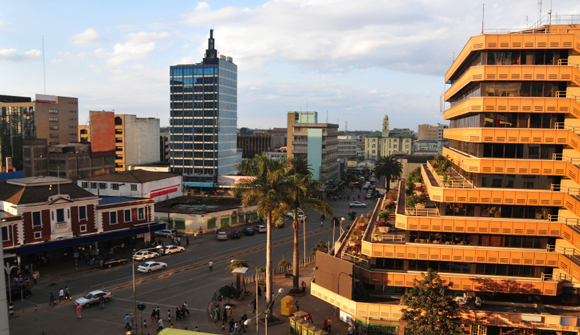 We've written a good deal about how elite promotions stumble forward in the era of the Internet, even if they've been discredited. Global warming is surely one of the best examples of this. We've also written about how the powers-that-be may intend for Africa to be the next China – an impoverished region brought to life by the miracle of fiat money-from-nothing and, generally, the miracle of "capitalism."

At least one of our Swiss gnomes has been traveling in Africa taking the temperature of this vast continent; the news that Kenya has just opened something called the Africa Carbon Exchange perfectly encapsulates the progress of both of these promotional trends. In this article, I'll try to drill down a little.

Global warming first. The idea that human beings produce too much carbon dioxide – one the world's two main life-giving gases – surely ranks as one of the single-most ludicrous dominant social themes the Anglo-American elite has ever invented. Yet the meme rolls on. Even now there are earnest investigations about ways to "sequester" carbon dioxide – pulling the gas out of the air, generating a solid form and burying it deep down in stable rock formations!

This seems to be the plan anyway, born no doubt of the increasing pushback that Anglo-American elites have experienced regarding global warming, which surely ranks as one of the single-most ludicrous dominant social themes the Anglo-American elite has ever invented. Even now, despite a widespread public lack of credibility, there are earnest investigations about ways to "sequester" carbon dioxide – pulling the gas out of the air, generating a solid form and burying it deep down in stable rock formations!

Why is the concept of global warming – now renamed climate change – so important to the Anglo-American power elite? The idea that this most essential of all gases is some sort of environmental poison is apparently intended to allow the powers-that-be to control people's energy habits and thus their behavior. It is also intended that to create the world's largest phony securities market. It is one that will trade "carbon credits" and throw off huge amount of trading profits and commissions. It is likely supposed to be a replacement for currency markets. Money power, properly applied, can build academic scholarships, hire ad agencies and political lobbyists and generally create a full-fledged industry from thin air.

Can one blame the power elite for this effort? They have precedent on their side. Over 100 years ago, Anglo-American elites decided to propagate central banking around the world. Today well over a hundred central banks print money-from-nothing and thousands of enormously wealthy bankers and financiers pretend that such paper products and electronic digits are as valuable as gold and silver extracted from the ground – and the masses, aided by misleading mainstream media propaganda, buy into the whole Ponzi scheme. The logic seems to be simple: If one can fool people into thinking that money can be created at the touch of an electronic button, why can't people be promoted into believing that one of the world's two most important, life-sustaining gases is actually "changing" the weather?

We've suggested previously substituting oxygen for carbon dioxide to expose the fundamental insanity of what is taking place. But one could presumably develop a system for catching lightening in a bottle, too. Or perhaps one could build vast desalinization plants, extract sea-salt from the oceans and bury the resultant compacted saline in vast salty depositories. Perhaps one could take all the leaves that fall from trees in non-equatorial parts of the world, gather them together in large Hefty trash bags and bury them in specially designed subterranean chambers.

The mind simply strains without success at finding ways to express the lunacy of what is occurring. Whether the earth is warming up or cooling down is surely subject to scientific debate. But never before have Western elites had the gall to try to monetize weather. In fact, the global warming scandal – known as Cimategate – should have halted this elite promotion entirely; it did crush the movement from the point of public credibility. Yet we can see from this Kenyan climate change announcement (as reported by Reuters) that the powers-that-be are doing what they do best; manufacturing their own alternative reality and placing it once more in play.

The "real" reality is incontrovertible. Credibly leaked emails show clearly that prominent "warmist" scientists conspired to winnow out research papers that rebutted the fraud of global warming. These same scientists plotted to manipulate data to show atmospheric warming where there was none. Additional data was apparently further manipulated to project a "hockey stick graph that promised a global warming catastrophe.

All these manipulations and more, once exposed, should have guaranteed that the nonsensical movement would finally die. But the Anglo-American elites behind this craziness have fought off its full demise. Several "investigations" proclaimed the innocence of the scientists involved. A shrunken global warming "community" has soldiered on, grimly ignoring the scam's exposure. This is a hallmark of elite promotions as we've explained in the past. No matter the impracticality or rejection of a specific elite formulation, the powers-that-be push forward with their promotional methodologies.

When it comes to global warming, there have been continued setbacks, thanks to Climategate. America's only climate exchange last year shut down and was folded into the larger European effort. But as we track this meme, we can see how the Anglosphere continues to pursue it nonetheless. The Kenya climate exchange platform, just developed, is a case in point.

According to the Reuters article announcing the exchange, "Carbon markets are intended to cut the cost of fighting climate change by giving companies the flexibility either to reduce their own greenhouse gases or buy emissions permits … The Africa Carbon Exchange in east Africa's biggest economy will provide holders of carbon credits with easier access to global markets and information, which in turn is expected to increase foreign investor interest in the region."

One can see how the elites are positioning this effort as one that will bring additional faux-prosperity to Kenya, which is one of Africa's more significant capitalist regions. Kenya we learn has some 17 projects awaiting registration by the executive board of the climate exchange, while three have already received approval. In the next five years, exchange executives claim Kenya will have attracted about $1 billion in foreign direct "energy-related" investments. Here's some more from the article:

Schemes, like those under the U.N. Kyoto Protocol's Clean Development Mechanism (CDM), promote investments in emission-reducing projects in the developing world by companies and governments in rich nations. In return for building wind farms or other projects, such investments can earn valuable carbon offsets called certified emission reductions (CERs) that can be sold for profit or used to meet mandatory targets to cut emissions…

GreenNext Sustainability Ltd, a Kenyan environmental management consulting firm, has been selling credits to international buyers who have access to global markets, but had to contend with low earnings due to high transactional costs. "They dictated prices and take off their commissions which means the prices we got for our clients are not as good," said James Mwangi, managing director at GreenNext. "With a local exchange we can probably try and influence the prices because the transactional costs are lower."

It all sounds so reasonable, until one realizes there is absolutely no definitive worldwide evidence that global warming exists, that it is melting polar ice-caps, that human beings are causing it (95 percent of the so-called greenhouse effect is caused by humidity, not carbon) or that warming – if it were occurring – would be "bad" for the world. Warming might open up additional farmland and generally increase productivity as new regions became more temperate and available for industrial expansion.

In any event, one can see how modern business is built in a fiat-money environment. The reality doesn't matter. Once one can print money-from-nothing, anything can be monetized, even the weather. Africa's planned "miracle" (we're pretty sure it's being planned) will be built on the chimera of climate change and other fantastical "business" concepts. It doesn't matter whether they make sense or not, whether they are credible, whether people actually accept them. What matters is that they provide trading opportunities and ways to wash fiat cash (money printed from nothing). The weight of all that money power is intended to drive the process.

In the 21st century, the elites have begun to perfect a capitalist system that is seemingly fraudulent from top to bottom. Large banks reportedly wash billions in drug money; the economies of developing countries are captured by fiat-money bubbles and stimulated until faux-booms are created – ultimately causing devastating collapses. Then the economic numbers are fudged to develop the perception that the resultant depression is actually a recovery, and the bubbles are reinflated as fast as central bankers can blow them back up.

Even now the Chinese "miracle" is collapsing; the monetary inflation rages out of control. Since the Chinese miracle likely cannot be sustained at its present rate, the elites are desperately looking elsewhere to develop cheap-wage industrial societies that will buy Western Treasuries and provide a bridge to a full-fledged global economic and monetary system. Africa, no matter its shortcomings, is high on the list of regions that can be developed for this purpose.

I have no idea if Kenyan climate exchange will succeed. Elite promotions – as we attempt to chart them daily – are in trouble the world over. The Internet itself has made these mainstream media elite promotions ever-more transparent and subject to ridicule on the blogosphere. This is in fact the reason that the elites have turned their collective Mordor-like eye on Africa. They have evidently decided to target the developing world where their manipulations are less evident and the promotional mechanisms are easier to implement. The UN, for instance, is very active in Africa in ways that would not be tolerated in the West.

A planned Union – similar to the failing European Union – is in the works for Africa too. There are already several regional central banks. Kenya and South Africa are the two major lynchpins of the planned African miracle. Of course more of the same is probably not what's needed. Millions of Kenyans live on a single dollar a day; the poverty is enormous; the human costs of the current system are incalculable. Western systems of regulatory democracy, grafted onto tribal politics, are a recipe for controlled chaos and, occasionally, genocide.

Into this place of Western-imposed dysfunction creeps the global warming meme. It is just as dishonest as the rest of the economic system that the West has imposed on this great, bleeding continent and its hard-working peoples. In the long-term, it will be no more successful. Africans will probably learn this the hard way.