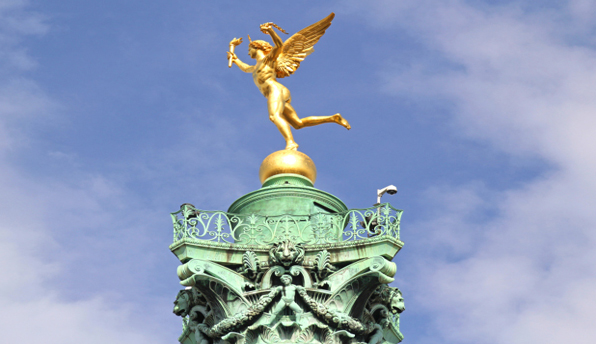 In the past few months, we've examined articles and editorials that seem to align themselves with a neo-French Revolution meme, odd as that sounds. In fact, each article we've analyzed has presented an argument that income disparity is leading to increased violence and polarization in the US … and worse.

From the point of view of the power elite of the day, the second solution was far preferable to the first. As the West staggers from one crisis to the next, we wonder if this solution is being pondered again: if globalist elites are contemplating class-warfare to direct popular anger away from the system itself.

In other words, are we witnessing a "reset" of a deliberate campaign to whip up social discord, one that began with the failed Occupy Wall Street movement but is now becoming evident again with different strategies leading to the same destination?

Here are some recent articles:

Yesterday, we discovered a FOURTH prominent article entitled, "Fed Research Paper: Rise in Partisan Conflict is a Drag on the U.S. Economy." The paper is reported on by the Wall Street Journal. Here's an excerpt:

Partisan political bickering is driving up government budget deficits and holding down job creation, business investment and overall U.S. economic growth, according to new research from the Federal Reserve Bank of Philadelphia.

The economic effects of rising partisan conflict "are not only large but also persistent" and "may help explain part of the slow recovery following the Great Recession," wrote Marina Azzimonti, an economist at the Philadelphia Fed, in a new working paper.

The connection between inequality and politics was also highlighted last week by economists at the New York Fed, who found that "polarization is strongly correlated with the extent of income inequality." Ms. Azzimonti then used an economic model to simulate the effects of a 72-point rise in the partisan-conflict index, equivalent to the increase seen from early 2006 to mid-2013.

Her findings "suggest that political disagreement exacerbated the detrimental effects of the last recession in the U.S."

In the decade or so that we've been publishing in one form or another, we've tried to show clearly that the mainstream media is apt to provide dominant social themes that usually lead to various forms of increased internationalism and state control. The mainstream media in the West and especially the US is concentrated into a handful of corporate controllers. And behind the scenes – where corporate analysis cannot reach – that concentration may be even more significant.

Memes certainly tend to arise suddenly within the media and are widely dispersed in only a few days or weeks. The change of nomenclature from "global warming" to "climate change" was one such startling display of group-think, happening in rapid fashion.

Additionally, wire services such as Bloomberg, AP and Reuters have an enormous influence on media coverage, yet the news judgments of all three entities seem quite similar, thus helping to further homogenize information.

It would seem that "income disparity" may be a major new theme. Search the Internet for these two words and you'll be surprised to see how many cites you find.

The recent expression of this theme, if that is what it is, can be found first in economist Piketty's academic article (see above) and then in rapid fire succession, we see the same meme repeated in high profile media posts and now a study from the Federal Reserve.

This has the traditional profile of an emergent theme. They usually begin – or are buttressed by – academic research and then are elaborated on in the mainstream media. Sometimes, as with this apparent theme, the progress takes place on both fronts at once.

I'm not prepared to say exactly what the ramifications are of such a meme. One can contemplate the worst-case scenario that some form of public agitation is being encouraged. This is not so far-fetched as it seems, given billionaire George Soros's apparent involvement in Occupy Wall Street.

The "income disparity" meme may be paving the way, however, for some sort of additional leveling action in the US and overseas. Maybe higher taxes, increased regulation or a continued and escalating attack on the wallets of the wealthy via increased taxes, bank confiscations and monetary inflation.

This meme may be used as well to justify FATCA and GATCA – global regulation sponsored by the US and aimed at capturing the financial information of citizens who are traveling or living abroad … and then using that information for wealth-confiscation purposes.

We've also suggested that the Wall Street Party obviously taking place is part of this meme. This "party" is going to elevate the fortunes of certain participants greatly. But whenever the party ends, it is going to diminish prosperity as quickly as it has inflated it.

It would certainly make sense to have in place a theoretical framework that can anticipate increased civil unrest and possibly channel that unrest in certain directions utilizing sociopolitical facilities already in place. We see this taking place already with the Tea Party today in the US and other political movements starting to become popular in Europe.

Prudence certainly suggests that we heed these early warning signals regarding "income disparity." It can be speculated that such a meme is aimed at laying the groundwork – at the very least – for considerable confiscation of wealth with or without violence.

Solutions? … Do what you can to increase and solidify the wealth that you have currently. Invest in precious metals and try to generate some sort of overseas investment and real-estate exposure no matter where you live.

If you are tempted to generate at least a modest exposure to the current (manipulated) equity boom, you may wish to seek positions in successful startups, among other investments.

In the meantime, please monitor this latest dominant social theme. It may turn out to be a significant one.