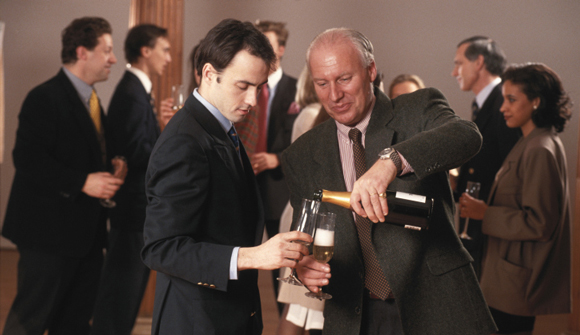 The party is on.

And you read it here first.

As we observe this phenomenon, we realize that global warming is going to play a big role in Wall Street's upcoming and ongoing promotion. But let's take it from the top.

Two significant things just happened that confirm a furtherance of this trend.

April is obviously when this investment party really gets going full-steam. It's blazing hot already. Thanks to the direct advertising for financing now permitted under the JOBS Act, we're aware that thousands of glossy promotional pitches are being sent via snail mail seeking accredited investors.

We track this stuff. It's truly remarkable. These brochures cost millions and millions to produce. Where's the money coming from? This is a huge promotion. All the big boys are in on it. One last Wall Street blow-off.

That's how they operate. It boggles the mind. People can't conceive of the vastness of these modern promotions. The entire industrial and promotional might of the Western world is seized and put into service – including the President of the United States.

Here's an excerpt from a Yahoo article:

"The impacts of climate change …. are already affecting communities, natural resources, ecosystems, economies and public health across the nation," Obama said in the order. "These impacts are often most significant for communities that already face economic or health-related challenges, and for species and habitats that are already facing other pressures."

The task force includes seven Democratic state governors and the Republican governor of Guam, a US territory that is vulnerable to rising sea levels in the Pacific Ocean. Also on the panel are the mayors of a group of major American cities.

Tell your friends and neighbors that the concentrated might of the West's largest corporations is being married to a single, overwhelming promotion buttressed by regulatory changes, advanced by the power of the US president and advertised via Wall Street's most skilled drummers and brokers and they will look at you like you're crazy.

They'll call you a conspiracy theorist.

But here's what we say: Be very careful. Keep your money close to you. We'll help be your guide. We're on top of this promotion from beginning to end.

There are many signs. You just have to put them together.

We pointed this out back in January: Larger companies are going to great lengths to highlight (non-existent) linkages between carbon and their various enterprises.

Yes, this is all about global warming AKA climate change. That's the biggest dominant social theme of all. By marrying this miserable and fantastical meme to a stock boom, the power elite behind it hopes to thoroughly cement the linkage between the "environment" and profit.

Download a free copy of my book Freedom Investing (click here) for more on how we analyze these promotions and how our VESTS strategy teases out the connections.

This is, of course, the answer to the failure of global warming to convince. They've tried everything, though nothing has worked very well. They've created an entire false industry of "alternative power" … even held vast conferences under UN auspices in which hundreds of countries send representatives to solemnly attest to the destructive nature of this non-existent problem.

Science has been especially damaged, as it has been subjected to the sub-dominant social theme that numerical majorities constitute credible research. Over and over, we hear how many scientists confirm the existence of global warming, as if science was a popularity contest.

This is a big part of James Cameron's pitch, in fact. In an article about Cameron's announcement, James Delingpole of the UK Telegraph noted it, as well:

Fascinating to learn that the number of scientists who think "climate change is real" has now gone up to "99 out of 100." I don't know about you but that increase (from a mere 97 per cent) has certainly persuaded me. Is it too late, do you think, for me to apply for a job with nice Mr Cameron as one of his expert advisers?

R-i-g-h-t. So that'll be James "Death Trains" Hansen, the activist scientist (late of NASA) who claims that climate change is a moral issue equivalent to the fight against Nazism in the 20th century and slavery in the 19th century; Michael Mann – creator of the most multiply-discredited artefact ("the Hockey Stick") in the history of climate science; Michael Oppenheimer, adviser to Al Gore's tendentious propaganda yawn-fest An Inconvenient Truth; …

There's a lot of validity to the above trouncing. Despite Cameron's enthusiasm, there hasn't been a rise in temperatures worldwide for about 16 years now and many of global warming's most prominent proponents (such as Michael Mann) have been exposed as considerably less expert and more polemical than their elaborately constructed public personas would have suggested.

In fact, the global warming/climate change movement has been reduced to claiming that land-based "warming" has mysteriously migrated to the deepest oceans from where it could apparently reemerge at any time like Godzilla to ravage the Earth.

The toll taken on the brand has been so destructive that the top men involved in the dispersal of these alarmist elements did something most unusual: They rebranded the promotion, changing the nomenclature (almost overnight) from "global warming" to "climate change."

Now they've pulled out the proverbial last stop. They're marrying their meme to money.

They're going to create a stock boom to end all booms and it's going to firmly tie corporations large and small to climate change. And then for good measure, they're going to fill the IPO channel with private placements built around global warming.

A second industrial revolution – only this will go down in the history books as a green one. That's how they'll write the history, as if it were a spontaneous evolution. It's not, of course.

But a lot of people will make a killing anyway. If you want to make a pile, identify one of these green startups and invest early. I don't recommend it, however. What's going on is profoundly immoral and will ultimately lead to financial devastation – especially for the middle class, which has been conditioned to entrust the management of their savings to "professional" fund managers who, unbeknownst to most, are simply pliable financial pylons that gobble up Wall Streeet's IPO offerings and bury them in their portfolios.

One last piece of advice is to fire the professional fund managers and take control of your own destiny. Consider removing your funds from the redistrubution corrals that money power has established to siphon off your wealth. Or don't and take your chances.