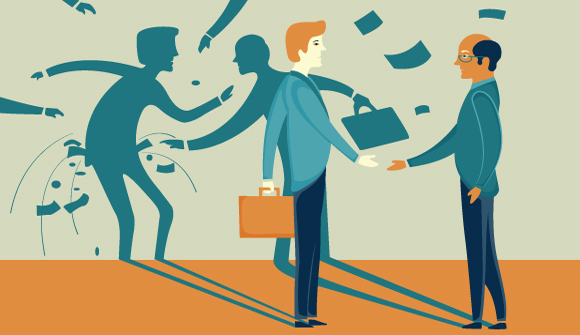 If we examine this week's main events, we observe some powerful dominant social themes in action. Perhaps the biggest continuing news was the US government shutdown. The memes were predictable enough, having to do with the efficacy of government and the necessity of its operation.

None were very persuasive, in our humble opinion, and in some cases they didn't stand up to minimal scrutiny. A further word on that at the bottom of this article …

In this past week's article, "The Devious Manipulation of the Budget Debate," we pointed out that most of the government was not shut down and that the idea that the Tea Party was going to be irretrievably damaged by the event was part of a larger promotion.

None of it really mattered very much, of course, because the larger issues remained intact. The US still has promissory obligations of something like US$200 trillion, and this is an impossible amount to pay back without significant currency debasement.

Shuttering the government or not shuttering makes little difference. As does the blame game. Whether the Republicans or the Tea Party were responsible for the mild jolt to government workers will not have much of an impact on either group.

The Republicans seemed to fear the sting of public opinion more than the Democrats, however. Republican bashing gathered momentum and toward the end of the week, polls were able to claim that more Republicans were being blamed for the government shut down than Democrats. At which point, Republicans began negotiating for a way out of the impasse. "Surrender" read the headline at the Drudge report.

Presumably, the Republicans believed what the polls were telling them – though how statistically insignificant samplings of several thousand people at a time can tell anyone anything is part of the "miracle" of modern polling.

While the Republicans on the Hill were meeting and caucusing to try to turn a looming legislative defeat into a victory, President Obama was meeting "in private with conservative journalists." Here's more from the Huffington Post:

The private White House meeting last for 90 minutes in the Roosevelt Room. The chat followed an on-the-record exchange with the White House press corps about the government shutdown and imminent debt default, which lasted over an hour.

Obama meets a number of times per year with various journalists—often liberal—to have an off-the-record discussion about the administration's views and plans. In August, he sat down with members of the New York Times, including conservative columnist David Brooks.

To call the above-mentioned reporters "conservative" is perhaps stretching the point but this is the reality of US journalism in the 21st century. The Tea Party is also labeled "conservative" by the mainstream media, though large parts of it evidently are not.

Still, political entrepreneurs such as Dick Armey who organized the movement into a political action instrument did reshape portions to emphasize "conservatism." It has been an interesting process to watch. Tea Party documentation has been carefully shaped to emphasize distaste for taxes and government oversight. The much bigger issues of central bank fiat money and overseas militarism have been reduced or removed outright.

Likewise, Brooks, Krauthammer and others, like most of the rest of their brethren, discuss what it is safe to discuss. Questioning the necessity of central banking or military excursions abroad are definitely not safe in the larger scheme of things. They can kill a reporter's career.

This is one reason that top columnists (conservative or not) so often restrict themselves to obvious talking points when it comes to editorial subject matter. It is also a reason why they matter less and less within the larger scheme of journalism.

President Obama obviously wanted a word with this group because he wants "the Right" to damp down its attacks on Obamacare. Never mind that the complex and dysfunctional legislation has only been prepared and passed as a way-station toward "universal care."

Anyone who values human life and the freedom to make one's own choices when it comes to health care would be against this purposeful attack on medical independence.

Once government has the power, every single medical treatment will be plotted and evaluated. This sort of extraordinary charting will not only add bureaucracy; it will reduce or eliminate creativity in the medical field. Alternative treatments will be squeezed out and even medical advances will find significant obstacles.

What is almost as bad is that we are told the move toward national healthcare is being stymied by the US's large insurance lobby. But if this were the case, why would the insurance companies tolerate Obamacare? Surely, they must know that the pressure to go further will be nearly irresistible.

One gets the idea that once again the entire Washington scenario is a kind of shadow play. We see the shadows on the wall, but we cannot see farther than that. The reality escapes us. In fact, it is presented to us by a power elite that is taking one deliberate step after another to increase the authority and reach of government and its globalization as well.

The economy, the political process and the media are so structured and controlled at this point that any spontaneous action is probably impossible. Things proceed as if scripted, and what is not scripted is constantly confronted and addressed so that it, too, can be better controlled.

The top elites fear insurrection as they continue to advance their agenda and this is one of the reasons for the current hyperactive regulatory and financial atmosphere. It is one reason, for instance, that they are doing everything they can apparently to re-stimulate the West's economy.

There's no doubt that a portion of the US public will participate in an expansion of jobs, stocks and money stuff. Yet at the same time fewer and fewer people are fooled by the larger conversation.

Perhaps the way to deal with modernity is to take what "they" give you without believing any of it. That lesson was relearned this past week.