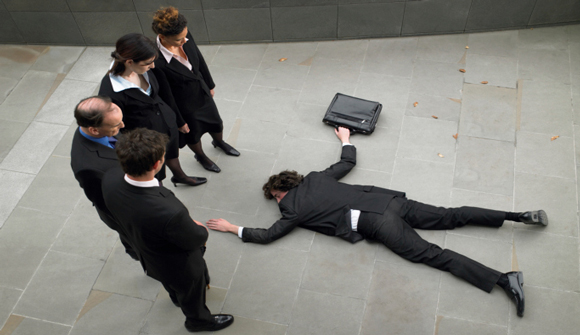 EDITORIAL
Will the Market Do What Western Leaders Cannot?
By Anthony Wile - December 04, 2010

It's a sign of the times. President Barack Obama's ballyhooed fiscal commission on Friday failed to come up with a plan to curb the US budget deficit. For close to a year, the panel has been laboring on US$4 trillion in cuts that would take place, approximately, over the next decade to pare the federal deficit to 40 percent of gross domestic product by 2035.

The deal was that the plan would be brought to the floors of the House and Senate if the proposal had the support of 14 members. But the vote was three shy of what was necessary. No deal. No vote. One more nail in the coffin of American fiscal solvency. What will happen now? Well, there have been pledges from various House budgetary authorities that some of the recommendations will be put in place anyway. But here is a question: Is US$4 trillion enough to put America back on a firm fiscal footing. The answer in fact may be "no."

Here at TheDailyBell.com, we tend to be libertarian-conservative in our outlook: government is the problem, not the solution. To rely on government to clean up the mess that has been made is a little like relying on an out-of-control bully to bring harmony and discipline to the classroom. It's not likely to happen.

America's financial house is in disarray. Its unconstitutional progressive tax structure has been crying out for reform since World War II. Even the nation's Treasury Secretary Timothy Geithner is a tax cheat. Meanwhile, thanks to the Federal Reserve, the dollar has lost between 95 and 99 percent of its value in the past 100 years. So much for the idea that the Fed is an "inflation fighter." Inflation "maker" is more to the point.

Various states (large ones like California) are starting to "formally" go broke. Other states and municipalities, facing tremendous budgetary problems, are beginning to cut what have been considered vital public services such as public education and police and firefighting services. Even the most sacred of cows – the municipal pension – may be in danger. What happens if municipalities simply cannot pay? If the till is empty, promises cannot be kept.

Here's a number to startle you: America's debt may not be US$13 trillion (the normally quoted figure) or even US$50 or US$100 trillion – figures that emerge when some unfunded liabilities are added in. According to U.S. economist, Laurence Kotlikoff, America's national debt is $200 trillion, when Baby Boomer demographic demands are calculated – including Social Security, public union, pension and health-care demands on the public purse. That's a mighty big figure. America, in fact, is destitute.

It's no surprise to us. At the Bell, we've been predicting a monetary and fiscal meltdown for years. We've also predicted the return to some sort of commodity-money standard, and that seems to be taking place, given the many countries that are dissatisfied with the way America is handling its financial affairs. It's hard to believe that only ten years ago, America's financial house was a good deal tidier than today. But that was before the advent of the George Bush administration. Two wars and one economic crisis later, America's budget is in ruins. Now it's the Democrats turn. But everything the Obama administration has done to "fix" the problem has in fact made things worse.

The Obama administration relies on what has been called "Keynesian economics" after the quasi-socialist 20th century economist John Maynard Keynes. Keynes was certainly (and unfortunately) the most influential economist of his generation, and the main thrust of Keynes' theories was that government itself could smooth out the bumps in the business cycle using monetary and budgetary tools. Basically what Keynesianism has come to mean is that the government can print money (using the power of a central bank) and spend money (borrow money and raise taxes) to create "make work" projects that keep people employed until a given economic crisis eases. The idea, to put it bluntly, is to maintain the current system and pay people just enough to survive (and eat) so that the system itself doesn't collapse from bankruptcy or into popular rebellion.

But this time around it's not working. The fiat-money, central banking system has been around for 100 years and has reached the end of its manipulative life. Central banks around the world delinked from gold some 40 years ago and this has gradually ruined the credibility and value of the world's reserve currency, the dollar. Now Russia, China and even South American countries are trying to remove themselves from dollar dependency. There is much talk of relinking paper money to some sort of underlying commodity so that governments (like the US) cannot spend themselves into oblivion.

The trouble is that there is one dirty little secret that no one talks about: almost every country in the world has a central bank and because of dollar reserve policy all these countries are delinked from money metals as well. This has never before happened in the history of the world. The ramifications are substantial. China's price inflation is running nearly out-of-control because that country's communist leaders have printed so much paper money that the currency is steadily losing value. India is in the same boat and so are a number of countries in South America. The European currency has not necessarily been overprinted – but as a result EU countries are going broke because they cannot debase their currencies as they have in the past.

The only solution is to return to some sort of commodity money. Gold and silver have served faithfully as such money in the past. At the Bell, we've long predicted the return of some sort of tangible monetary standard, perhaps even a gold and silver standard (called bimetalism). With current electronic facilities the supply of gold and silver in the world can be digitalized and circulation anomalies can be smoothed out. The criticism that there is not "enough" gold and silver is actually a moot point. There is always enough, especially if "free banking" polices are employed. Before the Civil War, the US was on a quasi-free banking standard and such standards have succeeded, on and off, throughout history.

The Internet itself is a "game changer" – as we often remark at the Daily Bell. The information about alternative monetary systems as well as the ability to create and market news kinds of money have spread far and wide throughout the world thanks to this new form of electronic communication. No longer do thinking people – the two percenters who matter – believe that only government solutions are the answer to economic and social problems. In fact, every law – every regulation and mandate – is a price fix, placed upon the larger society by force and distortive to the larger community. Inevitably, price fixing is inefficient and creates queues, scarcities and even rationing of some goods and services.

Central banking is a massive kind of price fixing of money – as central bankers "set" interest rates, distorting economies and causing terrible booms and busts over time. Western regulatory democracies fix prices (and create queues and shortages) every time a law is passed or a regulation is introduced. Over time, the distortive effects add up until economies have trouble functioning, unemployment becomes the rule rather than the exception and peoples' standard-of-living plummets to rudimentary levels. This certainly seems to be happening now.

Government has caused these problems. The useless laws, absurd environmental regulations, fiscal deprivation and monetary dysfunction are not apt to be cured by the same "bullies" that proposed, implemented and enforced them. So what will happen? Over time, Western societies may gradually collapse, not all at once and not in a manner much remarked upon, certainly not in the mainstream press. But slowly, the market itself may reassert its dormant power.

While government leaders meet in Geneva or Cancun, normal people will begin to use gold and silver – or even barter – instead of increasingly worthless paper. People will gradually withdraw their paper savings from banks and purchase goods and services of some significant value. People will work off the books to avoid taxes that are squandered on inflated municipal pensions; they will create communities that function away from – beyond increasing government dysfunction. It is already happening – no matter whether one approves or not – and the Internet is providing considerable support.

There is ample historical precedent for this sort of change. The Gutenberg press – the Internet of its epoch – helped spawn a whole wave of free market thinking: the Renaissance, the Reformation, even the Enlightenment. It survived attempts at censorship, licensing, etc. But there are other examples, too, even earlier, including those of great, ancient South American civilizations that collapsed mysteriously, much to the History Channel's puzzlement. We are told that the Mayans and others abandoned their fabulous cities because of drought and other environmental factors. But it is just as likely that the sophisticated tribes that provided the labor finally tired of the incessant warfare and bloodletting of the day. Each city was, at times, a mini-nation, battling with all the others.

After a point, perhaps, "civilization" became too much; the tributes became too much; the regulations became oppressive. Were the cities, then, simply abandoned … their inhabitants refusing to support societies that demanded so much but gave so little in return? And where are the descendents of these tribes today? In fact, they still exist throughout South America, farming and worshipping as they always have; the vibrant survivors of great, but oppressive cultures. Yes, they have survived and life goes on. The markets work; people prosper. Only the cities have crumbled.