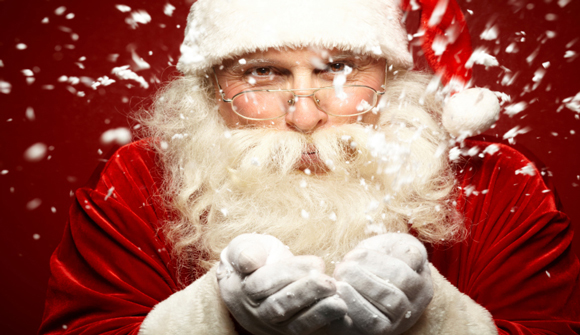 EDITORIAL
Yes, Virginia, There Is a Santa Claus
By Anthony Wile - December 25, 2013

The following essay was published by The Daily Bell on December 25, 2009 and remains a favorite of ours. It's called, "Yes, Virginia, There Is a Santa Claus."

The Federal Reserve and Congress are acting as our collective Santa Claus as we celebrate this Christmas holiday. It is their determination to stuff the stock market full of cash and questionable securities products that will likely keep a financial holiday season percolating for much of the next year at least and perhaps longer.

Please continue to refer to this latest incarnation of The Daily Bell as we track the "Wall Street Party" meme that we were among the first to recognize, as we've recognized so many other dominant social themes.

It is a peculiarly promising meme, in that those who track it wisely and well (perhaps with our help) stand a chance to make a significant return. No matter the announced "taper," it is fairly obvious that additional liquidity will continue to flow into markets as necessary.

Sooner or later, as we've pointed out, this strategy will cease to be effective and both bond and stock markets will surely crash, and hard.

In fact, those organizing this latest party likely have in mind making its aftermath so miserable that people will beg for a more globalist economic regime as an antidote to what they are living through.

But all that is in the future. For now, on behalf of our entire team, I want to express the wish that everyone concentrates on enjoying the holiday season as best they can, and that is a safe one for you, spent among loved ones.

The initial essay begins directly below …

Dear Editor: I am 8 years old. Some of my little friends say there is no Santa Claus. Papa says, 'If you see it in THE SUN it's so.' Please tell me the truth; is there a Santa Claus? – Virginia O'Hanlon, 115 West 95th St. – NY Sun (defunct)

Free-Market Analysis: Every year around the holidays, we reread the answer to the letter from little Virginia O'Hanlon. We like to read it because it reminds us of a simpler time in the American republic when the leveling trends that have overtaken the country were not so far advanced, and the sophistries justifying it were not so well rehearsed and cynical.

Eight-year-old Virginia O'Hanlon wrote the letter, above, to the editor of the New York Sun, and the response was printed unsigned in the newspaper as an editorial on Sept. 21, 1897. The writer was Francis Pharcellus Church who was actually the brother of the publisher of the Sun, and his response is among the most reprinted of editorials. Here then is the answer to little Virginia O'Hanlon in full:

We take pleasure in answering at once and thus prominently the communication below, expressing at the same time our great gratification that its faithful author is numbered among the friends of THE SUN.

VIRGINIA, your little friends are wrong. They have been affected by the skepticism of a skeptical age. They do not believe except [what] they see. They think that nothing can be which is not comprehensible by their little minds. All minds, Virginia, whether they be men's or children's, are little. In this great universe of ours man is a mere insect, an ant, in his intellect, as compared with the boundless world about him, as measured by the intelligence capable of grasping the whole of truth and knowledge.

Yes, VIRGINIA, there is a Santa Claus. He exists as certainly as love and generosity and devotion exist, and you know that they abound and give to your life its highest beauty and joy. Alas! how dreary would be the world if there were no Santa Claus. It would be as dreary as if there were no VIRGINIAS. There would be no childlike faith then, no poetry, no romance to make tolerable this existence. We should have no enjoyment, except in sense and sight. The eternal light with which childhood fills the world would be extinguished.

Not believe in Santa Claus! You might as well not believe in fairies! You might get your papa to hire men to watch in all the chimneys on Christmas Eve to catch Santa Claus, but even if they did not see Santa Claus coming down, what would that prove? Nobody sees Santa Claus, but that is no sign that there is no Santa Claus. The most real things in the world are those that neither children nor men can see. Did you ever see fairies dancing on the lawn? Of course not, but that's no proof that they are not there. Nobody can conceive or imagine all the wonders there are unseen and unseeable in the world.

You may tear apart the baby's rattle and see what makes the noise inside, but there is a veil covering the unseen world which not the strongest man, nor even the united strength of all the strongest men that ever lived, could tear apart. Only faith, fancy, poetry, love, romance, can push aside that curtain and view and picture the supernal beauty and glory beyond. Is it all real? Ah, VIRGINIA, in all this world there is nothing else real and abiding.

There is much we enjoy about this answer from Church who had no children himself and died at age 67. The answer is full of confidence, for one thing. It was a time when newspapermen like Church could not have conceived of the death of newspapering, so the confidence of the medium itself is inherent in its composition. It also strikes us as confident from a cultural point of view because Church would have been repelled by the notion that writing about Santa Claus might offend someone of another religion.

It is humorous, of course, in a most adult way because it takes a childish topic and responds with what in our opinion is a brilliant presentation of philosophical terseness. The composition, despite its mannerisms, is a kind of elongated haiku. Remove even a single word and we think you lessen the whole. In fact, it is said that Church grumbled when he received the assignment of answering a child's letter about Santa Claus (in late September, no less). However, this irritation obviously launched his immortality, for we can see in the composition the aspiration to write a significant commentary.

Church had opinions, of course – and he might be horrified to see what journalism is like in America these days with its faux impartiality and fundamental illiteracy. Yet, the signs are there that he was obviously engaged in a larger debate, as he wrote in his editorial about a "skeptical age." That skepticism of course would have been embodied in the isms of his time: Marxism, socialism and even more emphatically their godless cousin nihilism. Church, no matter his intent, had the good sense to couch the editorial in the most general of terms, thus turning what would have been a specifically expressed criticism into something more general and far longer lasting.

Here is an explanation of nihilism from Wikipedia …

Although the term Nihilist was first used by the German theologian Friedrich Heinrich Jacobi, its widespread usage began with the 1862 novel Fathers and Sons by the Russian author Ivan Turgenev. The main character of the novel, Bazarov, who describes himself as a Nihilist, wants to educate the people. This "go to the people – be the people" campaign reached its height in the 1870s, during which underground groups such as Circle of Tchaikovsky, People's Reprisal and Land and Liberty were formed. This became known as the Narodnik movement. The Russian State attempted to suppress them. In actions described by the Nihilists as propaganda of the deed many government officials were assassinated. In 1881 Alexander II was killed on the very day he had approved a proposal to call a representative assembly to consider new reforms.

Conclusion: The editorial by Church is in fact an extraordinary rebuttal of nihilism (especially), as cogent and appropriately evangelical as any that we have ever read. Kind and witty in its composition, it succeeds as a commentary on a man's age and consuming philosophical disputes, and does so while commenting on Santa Claus. As grateful readers, we should be inspired annually (and we are) by the nobility of a mind that can take, even once, a child's question and create from it a masterpiece of spontaneous philosophical eloquence.

A HOLIDAY NOTE: We are grateful to all who supported us this year, took the time to read the Bell and often to write in expressing their thoughts (for better or worse) on mainstream articles we attempted to analyze from a free-market perspective. We wish our readers and viewers (a gratifyingly expanding audience) the very best of holidays and a joyous new year – one faced with optimism and stripped of the false expectations of sentimentalism and elite promotions. (It is probably always better to look at our lives as they are rather than as someone else wishes us to see them.) We are blessed, we believe, with some of the most intelligent, literate and discerning viewers on Earth, and we thank you humbly for stopping by now and again and sharing a little of your precious time with us.