EDITORIAL
The Recovery That Never Happened
By Bill Bonner - April 23, 2013

Gold seemed to be stabilizing at the end of last week. Commodities remained weak. Steel has fallen 31% this year. Brent crude is off 17% since early February. And copper is down 15%.

Copper is the metal you need to make almost anything – houses, cars, electronics. When it goes down, it generally means the world economy is getting soft.

At the start of last week, the conventional analysis of the gold sell-off was that the central banks' efforts to revive global growth were working. The feds had the situation under control. So who needed gold?

By the end of the week, it appeared that gold – and commodities – had sold off for the opposite reason: because central banks' money printing wasn't working and the world was slipping further into a period of slow growth and barely contained depression.

Recent U.S. economic data has been disappointing, especially in the realm of housing, which is what the US bull case is all about.

And growth has begun to slow in China – still considered a global growth engine – as it continues to crack down on corruption, a property bubble and a bloated shadow banking business. China's plan to shift its economic model away from exports to domestic demand-led growth has also contributed to the lower growth rate.

In the US, building permits are down… and foreclosures are up. There is no renaissance happening in manufacturing. Only half of the new jobs expected showed up in March. Retail sales are down, and consumer confidence is off.

And in Britain, the unemployment rate is rising. Retail sales are falling. And figures coming out this week will probably tell us that the country is in a triple-dip recession.

Here's Ambrose Evans-Pritchard in The Telegraph:

It is becoming ever clearer that the roaring boom in global equities since last summer has priced in an economic recovery that does not in fact exist. The International Monetary Fund has had to nurse down its global growth forecasts yet again. We are still stuck in an old-fashioned trade depression, with pervasive overcapacity in manufacturing plant and a record global savings rate of 25% of GDP…

As you can see from the chart below, the divergence between stock markets and the Deutsche Bank index of raw materials is astonishing to behold, so like the pattern in early 1929… 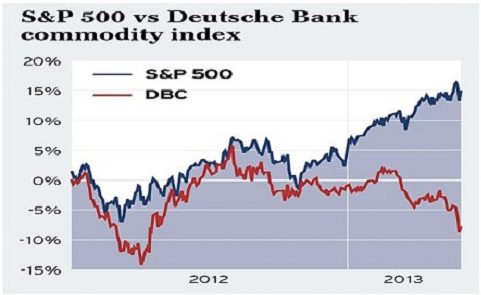 The US economy is growing below the Fed's own "stall speed" indicator. Half a million people fell out of the workforce in March. Retail sales fell in March. So did manufacturing…

"There is a threat of deflation almost everywhere. A lot of central banks will have to follow the Bank of Japan, whatever they say now," said Lars Christensen from Danske Bank.

The era of money printing is young yet. Gold will have its day again.

What you need to know to make it through the tough times ahead
June 01, 2020 – By Joe Jarvis

How the Elite hijack your Attention to make News seem Important
April 27, 2020 – By Joe Jarvis