"It is well that the people of the nation do not understand our banking and monetary system, for if they did, I believe there would be a revolution before tomorrow morning." ~ Henry Ford

Ben Bernanke, Mario Draghi and Shinzo Abe are the modern-day heroes. They will not allow for anything bad to happen. Their restless devotion to stability and prosperity will ensure that the world finds its way back to fortunes on that painless path of monetary expansion. A sweet feeling of safety and tranquility comes over us when we think of our central bankers. Long live the Keynesian solution!

A few possibly naive, but nevertheless important, questions need to be posed here: First of all, what impact has monetary expansion had so far? Secondly, while inflation and interest rates appear to remain low, can we really expect central banks to fully control that situation?

Last week, Ben Bernanke merely broached the possibility of the Fed's reducing measures of quantitative easing (QE3) and monetary stimulus "if economic conditions continue to improve". Almost instantly, large parts of the market considered that threat enough to sell. After the Nikkei lost more than 7% within one day of trading, other markets around the world followed suit and corrected, albeit at much lower levels. It appears that many investors actually and truthfully believe economic conditions – like the real, fundamental economy – will indeed "continue to improve."

I have my doubts. And, while our client portfolios continue to be invested in the stock markets, our risk management is in high gear. As the global equity and bond markets grind ever higher, abundant indications exist that we have once again entered bubble territory. This makes this period quite interesting but also quite dangerous.

A sustainable recovery based on QE?

So far, the QE programs in America, Europe and Japan have had substantial spillover effects in financial markets. In particular, the Fed's policies have reduced global bond yields, raised global equities and led to US dollar depreciation. However, they have had little positive impact on the real economy.

The Fed's track record of growing the economy based on monetary expansion is dismal. Currently, as part of QE3, the US Fed has been "printing" money (expansion of M1) in order to acquire, on a monthly basis, a total of US$ 40 billion worth of U.S. mortgages and US$ 45 billion worth of long-term U.S. Treasury paper. Their hope: to help the US economy grow by boosting money supply (monetary inflation) and keeping interest rates low.

So far, success is nowhere to be seen. The following chart visualizes a central problem. While the Fed has been boosting money supply, money velocity has been moving lower. 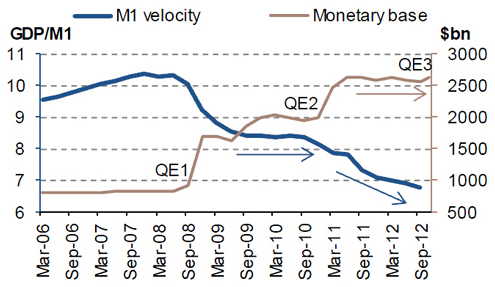 The velocity of money is a key factor and measurement of economic activity. It has also been called velocity of circulation and, much earlier, currency. It represents the average frequency with which a unit of money is spent on new goods and services produced in a specific period of time. The Fed's monetary expansion is, to some degree, based on the following formula:

Based on this formula, as you increase money supply, you should see an increase in GDP, growth. However, this would require that money velocity remains equal or grows as well. That has not been the case. Over the past five years, money velocity has been in a downtrend. The Fed's QE policies are not working.

Are Central Bankers in Control? Can They Keep Interest Rates Low?

In December of 2011, at the height of the European debt crisis, the European Central Bank (ECB) adopted a US-style monetary policy and inserted substantial liquidity via its first LTRO-Program (Long Term Refinancing Operation). Then, in July of 2012, when new tensions were building in the European peripheral states, Mario Draghi held a speech that made a considerable difference.

Clearly, ever since Mario Draghi's July, 2012, promise to "do whatever it takes", the interest rates of peripheral European countries, and particularly their spreads versus the rates in Germany, have come down from their highs in 2011.

Certainly, the ECB has been able to buy Europe some time. But, as in America, the European economic indicators are not looking too promising, and economic growth is nowhere to be seen. On the contrary, new pressures are starting to build as peripheral states in Europe are starting to resist austerity measures. 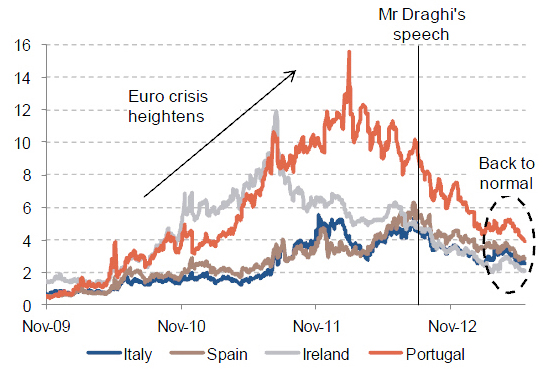 Nevertheless, for now, financial markets have come to the conclusion that we might be back to "normalcy." Therefore, one might conclude that the central bankers are in control of the situation. They will be able to keep the crisis in check.

But what about Japan? Is Shinzo Abe not following along the same story book as his central banker colleagues in the West? Print money, keep interest rates low, stave off deflation and lead the economy back into growth territory.

Japanese Interest Rates Are Up!

Well, such is Abe's plan, for sure. However, over the past few weeks, interest rates on 10-year government bonds have more than doubled in Japan. Financing a budget deficit that has been around 12% of GDP on an annual basis (!) has just become a lot more expensive. So, Abe will have to let the money machine roll yet a little faster to keep up.

I'll be very up-front here: I don't see central bankers as prudent and sophisticated engineers at the helm of a scientifically calibrated high-tech ship. Instead, I view them as thick-glassed and wondrous-eyed tinkerers piloting a rusty old printing machine, hopeful it won't blow up in their faces, watching while the beast spastically spits out more debt and bubbles. Instead of slowing the machine down for some badly needed maintenance and re-adjustments, they run it faster and faster, possibly based on a premonition that, should they slow it down and come to a full stop, their toy could be taken away from them.

Seriously, while I think central banks are generally well-trained and earnest individuals with long lists of credentials, I wonder whether they have lost their common sense somewhere along the way. I would hope that they might notice that, over the past decades, debt has developed in one direction and that each new crisis was larger than the one before. Instead of changing the strategy, the response has always been more of the same.

In this context, the following chart and analysis courtesy of Barclays Research should be considered.

As you can see in the chart, EU High Yield bonds (EU HY), emerging market stocks (MSCI EM), developed markets stocks (MSCI DM) and US High Yield bonds (US HY) benefitted the most, or were most sensitive with positive correlations. Consequently, these asset classes can be expected to be most vulnerable in a downturn, or a change of monetary policy. One might then consider shorting the respective asset classes.

I guess the primary conclusion for any prudent investor, however, should be to not be lulled in by the soothing talks of Ben, Mario and Shinzo.

Granted, they may be doing their best, and doing so in good faith. Only you should not rely on their being able to succeed. Ultimately, the interest rates and inflation expectations of financial markets are fickle. They can turn on a dime. And, irrespective of all their good intentions, the good men at the central banks will not be able to control the loss of confidence in the markets.