Emerging market economies appear increasingly sound. This improvement, in part, can be attributed to commodity exports and wage advantages, which, in combination, have led to increased foreign currency reserves. Contrary to many of the 'developed economies,' emerging markets are generally not plagued with excessive debt and deficit issues. Ultimately, this reality reflects a lower structural risk and should be considered in the construction of one's investment portfolio.

The purpose of this article is to point out some of the big picture trends that support this transition from the portfolio periphery to the core.

We consider the following seven trends as critical in this respect:

The world's economies and financial markets are changing in a big way. Today, for the first time since before the Industrial Revolution, the so-called "emerging markets" now contribute as much to the global economy as their so-called "developed" peers. It is to be expected that, with the usual ups-and-downs, this trend will continue for a long time to come.

The very simple reality is that, in some ways, we are moving back to the historic norm. Truthfully, the dominance of the developed, Western industrialized world was an anomaly in the grand context of human history.

For centuries China and India were the world's leading economies, at the center of global trade and innovation. Therefore, one might say that in essence the shift of economic power and wealth toward emerging markets represents a shift toward a world that is more in line with long-term history.

Irrespective of which time horizon you wish to apply to history, and irrespective of whether you like this trend or not, it is a reality that we need to consider in our investment choices and principles. And the change does create a wealth of opportunities for investors, in both the emerging and developed markets.

Where there is growth

In general, when one speaks of the allure of emerging markets, reference is primarily made to the level of GDP growth in such markets, or in other words, the growth of output in emerging market economies. This is partly a result of "globalization," the most prominent term of the '90s. It is also a result of the business cycle and demographic trends. 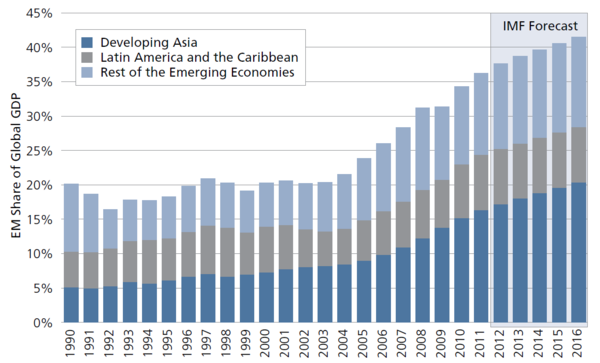 According to IMF figures, the emerging economies' share of global GDP has grown from 21% to 36% over the past ten years. In consideration of the growth differential between emerging and developed economies, this is expected to continue as depicted in the figure above.

The effect of GDP growth, particularly when it is greater than that of competing economies, has led to a robust foreign exchange reserve accumulation. Over the past ten years, Asian central banks alone have accumulated more than US$ 3.5 trillion of foreign currency reserves, with China responsible for roughly US$ 2.5 trillion thereof. At the end of 2011, overall, emerging market foreign reserves stood at US$ 6.8 trillion. In comparison, developed countries only had US$ 3.4 trillion.

Furthermore, due to the competitive advantages regarding natural resource exports and labor costs, Asia in particular has benefitted from strong export growth, the result of which has also been substantial trade and current account surpluses.

In other emerging economic regions, for instance in Central and Eastern Europe and Latin America, current account balances have declined marginally. Some of this, especially in Latin America, relates to increasing domestic consumption, which is being fueled by emerging middle classes. Notably, the current account balances in emerging economies are significantly above that of the United States.

As middle classes gain the purchasing power necessary to increase consumption and improve their standards of living, emerging economies can be expected to increasingly transition from being dependent primarily on exports to developed countries to having more balanced growth, driven increasingly by domestic consumption and investment in local infrastructure.

Beyond growth, and possibly even more important, emerging economies have vastly improved their balance sheets and their systems of fiscal and monetary governance. This is particularly relevant in the context of the growing fiscal and monetary imbalances of most OECD countries. While America and Europe are slipping deeper and deeper into the morass of debt, emerging markets are not burdened by such problems.

Fiscal positions in many emerging market countries have been strengthened through robust local institutions. Sovereign Wealth Funds have accumulated large sums, received in part from the commodity boom, and are investing much of it locally. Private and public pension funds (such as the mandatory savings systems in several Latin American countries, including Chile and Colombia) also invest heavily in their home regions.

A significant amount of investment has been directed towards infrastructure projects. Also noteworthy are investments in local companies. These institutions have helped form a stable long-term local investor base, thus contributing to a potential reduction in capital market volatility in these countries.

Since the 1990s, many emerging market countries have restructured their sovereign debt and instituted fiscal reforms that have set them on a more stable course than was the case in prior decades. Inflation has declined dramatically as many central banks raised interest rates in the late 1990s to help tame inflation. Although the expansionary monetary policies of America, and now also of Europe, have led to imported inflation in emerging markets to some degree, inflation is generally in decline and no longer necessarily higher than in developed markets.

From our perspective and taking into consideration a combination of the factors discussed above, this has three investment implications:

Second, it is possible that this risk premium compression is secular, not cyclical. In other words, it may be a one-time transformation in the perceived "riskiness." Emerging market equities could be on the precipice of a similar one-time risk premium change. Such a scenario could provide a unique opportunity to overweight strategic asset allocations toward emerging market equities.