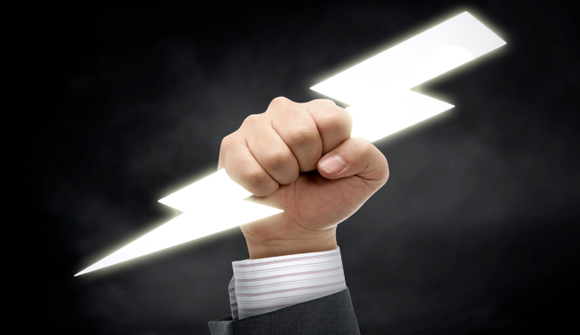 If you have been watching the news, you know that Ron Paul is now beating both Gingrich and Romney in the polls and could walk away with a win in Iowa.

Some say he could also walk away with a win in New Hampshire, and possibly even win the Republican (GOP) nomination.

For the Republican National Committee (RNC), this must be uncomfortable − the idea that they would be forced to nominate a principled, Constitutionalist just because WE THE PEOPLE demanded it.

Etymology of the term SPOILER:

The term "spoiler" is a derogatory term that was dreamt up by statists in the Democratic and Republican parties in order to sucker the public into continuously voting for no one outside the Establishment. In other words, if you vote your conscience, YOU are a "spoiler." If you run on principles of your conscience and take votes away from an Establishment candidate, YOU are also a "spoiler."

Thus, since Ron Paul votes his conscience, since he rejects certain aspects of the Establishment − such as the Federal Reserve's abuse of the monetary system and its financing of the welfare-warfare empire we have now become − there is no way apparatchiks in the GOP will nominate Dr. Paul no matter what WE THE PEOPLE want.

And to this end, lackey pundits in the CFR-dominated, mainstream media continuously chant that Ron Paul has "no chance to get the Republican nomination." They spew this so often, it's obvious they don't believe their own lies.

But here's the joker: Ron Paul does not even need the GOP to win the general election. If he were to walk away for a third party, he would take at least 12% of the Republican vote with him. He would also take another 15% from the Independents and at least 11% from the Democrats. This would give him 38% − enough of the vote to win the Presidency in a three-man race.

GOP strategists know all this and this is why you will never hear them utter these statistics in the mainstream media. If the public were to become too "hopeful" − if they were to understand the mathematics of the situation − even more people would vote for Ron Paul if for no other reason than to be on the winner's bandwagon.

So, the GOP has some serious choices to make.

Either they morph into a small-government party and support the Ron Paul Revolution of "getting back to the Constitution," or they risk losing their power to a new political party. And a new political party would not only mean the demise of the Republican party, but the Democratic party as well.

Since the Democratic Party AND the Republican Party are BOTH the parties of BIG government, a new political party of SMALL government would reveal to the public − more than ever − what the two mainstream parties have become.

The two mainstream parties − the Democrats and Republicans − have become, in essence, two departments of the same police state. They are the same political party, in effect: growing the government ever larger and ever more militaristic, both domestically and internationally. The PATRIOT Act expands the police state domestically, and the UN, IMF, WTO, NAFTA, GATT and NATO −which they BOTH continuously and blindly support − expand the police state internationally.

Due to serious abridgments of the US Constitution and principles stated in the Declaration of Independence, the United States are now run by a dictating oligarchy known as the UNITED STATES. And this dictating oligarchy is dominated by cultural Marxists and corporate fascists who have hijacked the Democratic and Republican parties, respectively.

The "DemoPublicans" have established the Department of Homeland Security for the purpose of administering their police state and the PATRIOT Act has become their new Constitution.

If you accept the idea that the Democrats and Republicans (again the "DemoPublicans") have become two departments of the same police state − two wings of the same ugly bird − you will have to accept that ultimately it does not matter whether a Democrat or Republican is elected to the presidency. It does not matter if Obama or Romney is elected president. Establishment politicians in either of these "two" parties will continue to use the Federal Reserve System to monetize debt (print money out of thin air) and use this fraudulent "fiat" currency to build their welfare-warfare state.

Thus when an entity controls the HEALING and HURTING of Humankind, doesn't that entity, in essence, CONTROL Humankind? Well, welcome to the DemoPublican control mechanism − something you might think about the next time you vote or mindlessly scream out for your Clinton-, Bush-, Obama-, Gingrich- or Romney-candidate.

Taken as a whole, the Demopublican machine − now assembled more by supra-national, international banking families than American citizens − has destroyed US politics that used to center on constitutional principles. Controllers in this CFR-led embryonic world government have created a well-oiled machine to maximize the plunder of millions, if not billions of people, through the mechanism of central banking, debt and the hurting-healing cycle. Would it not be reasonable to posit that the Democratic and Republican Parties are thus primary tools in what seems to be a master plan of globalization?

Ron Paul − a strict limited-government Constitutionalist with an appreciation for ethnonationalism − does not fit in with the New World Order's management plans. Therefore, if he wins the popular vote not only in Iowa and New Hampshire but across the nation, the DemoPublican controllers have a serious problem.

They can either rig the elections so it looks like Dr. Paul did "not" win, or they can blackmail him by threatening his family, like they did when Ross Perot was getting too popular.

If Dr. Paul walks away from the GOP to go Indy, in reality he will "spoil" nothing, for as discussed above, the Democrats and Republicans are the same political party in effect, so there is nothing that CAN be "spoiled".

Also, since the DemoPublicans must continue the cockfight between them − so the illusion that they are "different" parties can be maintained − this fighting has been, of necessity, escalating into a GRIDLOCK. Note the endless fighting about extending payroll tax cuts, Obamacare and illegal immigration. Thus, even if Ron Paul is labeled a "spoiler" − for thwarting the Establishment Controller's plan to get one of their puppets nominated or elected − he will spoil nothing.

IT IS IMPOSSIBLE FOR RON PAUL TO BE A SPOILER, BECAUSE:

A) THE DEMS AND GOP ARE THE SAME PARTY IN EFFECT, AND;

B) EVEN IF OBAMA GETS REELECTED, THE DEMS AND GOP WILL BE GRIDLOCKED AND THUS NOTHING WILL GET DONE.

The term "spoiler" is used by two groups of people:

1) the ignorant or IQ-challenged person who knows little or nothing about politics or the art of war, and

2) the statist propaganda-merchant who is trying to give the public the illusion that there is a "difference" between the Democratic and Republican Parties.

The reason the statist propaganda-merchant is trying to perpetuate the meme that there is a difference between the two major parties is so the general public will not look elsewhere for the solution to their problems. If one can get the Democrats and Republicans fighting with each other, it gives the illusion that they are "different" to the degree they "fight." Indeed they DO have "differences"; however, the differences are over trivial issues. On all the major issues the Democrats and Republicans are identical, overtly and covertly, thus they are the same political party in effect. You saw how many of Bush's policies Obama kept in place when he came into office ostensibly to "change" things. The same thing will happen if the Republicans take back the White House, ad infinitum.

So this is why Ron Paul is such a threat to the Establishment. He's running on the GOP ticket basically so he can get mainstream media exposure. The mainstream tried to ignore him in the last election. Remember how Hannity practically spat on Dr. Paul in the 2008 election? Remember how all the other pundits treated him? Then, when he suddenly raised millions of dollars with his "money bombs" and millions of voters started joining the grassroots Ron Paul Revolution − which kicked off the Tea Party Revolution − it wasn't "politically correct" to spit on him any longer. Worse, they couldn't ignore him into oblivion like they ignored all other dissenting candidates. Third-party candidate Ross Perot was only able to get mainstream media exposure because he purchased it with his personal wealth. Neither Ralph Nader nor Harry Brown, on the other hand, have been able to purchase such exposure; thus they have never been able to get an alternative vision into the public domain.

Thus, if Ron Paul continues to get support from the rest of the nation he's currently getting in Iowa, the GOP should technically nominate him, but it's a long-shot they will.

After all, for Ron Paul to win and use the vote to destroy the cultural Marxist-infested, totalitarian fiat empire, being built by controllers of the "liberal world order" is incomprehensible to them even though Pat Buchanan details in his new book, Suicide of a Superpower, the reasons why the moment of globalism and "free" trade has passed.

But such is the power of the zeitgeist for the world is in revolt, from the Middle East to Wall Street. The 99-percent don't know exactly HOW they have been screwed, but they do know that they HAVE been screwed − at least for the past 100 years. From the Tea Partiers to the Wall Street Occupiers in America, WE THE PEOPLE are fed up with:

1) a Congress that has been bought and sold by corporate fascists,

2) Presidents that start wars and act like Marxist dictators,

3) an activist Supreme Court that legislates from the bench making one-size-fits-all laws that ignore the original intent of the Founders.

So don't let CFR-infested, Establishment propaganda spewed through the mainstream media or the DemoPublican police state dissuade you from voting for Ron Paul, whether he stays on the GOP ticket, goes Independent or starts a new party.

It is not too late to act. Vote out the incumbent congressmen and vote in Ron Paul no matter what scare tactics the pundits on CNN, FOX News or MSNBC attempt to use on you. Ron Paul CAN get 38% of the vote and win the presidency. This is not an opinion; it's mathematical fact.