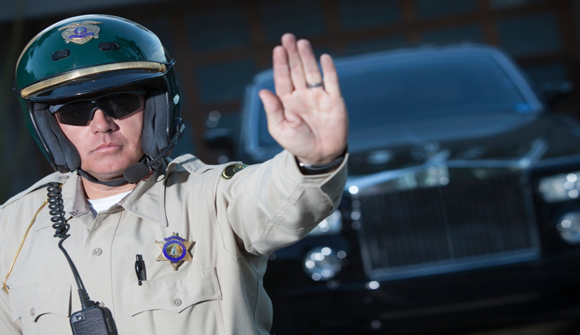 Trying to predict the outcome of any encounter with the police is a bit like playing Russian roulette: most of the time you will emerge relatively unscathed, although decidedly poorer and less secure about your rights, but there’s always the chance that an encounter will turn deadly.

The odds weren’t in Walter L. Scott’s favor. Reportedly pulled over for a broken taillight, Scott—unarmed—ran away from the police officer, who pursued and shot him from behind, first with a Taser, then with a gun. Scott was struck five times, “three times in the back, once in the upper buttocks and once in the ear — with at least one bullet entering his heart.”

Samuel Dubose, also unarmed, was pulled over for a missing front license plate. He was reportedly shot in the head after a brief struggle in which his car began rolling forward.

Levar Jones was stopped for a seatbelt offense, just as he was getting out of his car to enter a convenience store. Directed to show his license, Jones leaned into his car to get his wallet, only to be shot four times by the “fearful” officer. Jones was also unarmed.

Bobby Canipe was pulled over for having an expired registration. When the 70-year-old reached into the back of his truck for his walking cane, the officer fired several shots at him, hitting him once in the abdomen.

Dontrell Stevens was stopped “for not bicycling properly.” Four seconds later, the sheriff’s deputy shot Stephens four times as he pulled a black object from his waistband. The object was his cell phone. Stephens was unarmed.

If there is any lesson to be learned from these “routine” traffic stops, it is that drivers should beware.

At a time when police can do no wrong—at least in the eyes of the courts, police unions and politicians dependent on their votes—and a “fear” for officer safety is used to justify all manner of police misconduct, “we the people” are at a severe disadvantage.

According to the Justice Department, the most common reason for a citizen to come into contact with the police is being a driver in a traffic stop. On average, one in 10 Americans gets pulled over by police.

Yet as Sandra Bland learned the hard way, the reason for a traffic stop no longer matters. Bland, who was pulled over for allegedly failing to use her turn signal, was arrested after refusing to comply with the police officer’s order to extinguish her cigarette and exit her vehicle. Three days later, Bland was found dead in her jail cell.

What Bland didn’t understand was that police officers have been given free range to pull anyone over for a variety of reasons, from windows that are too heavily tinted, driving too fast, driving too slow, failing to maintain speed and following too closely to improper lane changes, distracted driving, screeching a car’s tires, and leaving a parked car door open for too long.

Motorists can also be stopped by police for driving a certain make of car (Mercedes, Grand Prix and Hummers are among the most ticketed vehicles) and having anything dangling from the rearview mirror (air fresheners, handicap parking permits, troll transponders or rosaries).

Incredibly, a federal appeals court actually ruled unanimously in 2014 that acne scars and driving with a stiff upright posture are reasonable grounds for being pulled over. More recently, the Fifth Circuit Court of Appeals ruled that driving a vehicle that has a couple air fresheners, rosaries and pro-police bumper stickers at 2 MPH over the speed limit is suspicious, meriting a traffic stop.

Unfortunately for drivers, not only have traffic stops become potentially deadly encounters, they have also turned into a profitable form of highway robbery for the police departments involved. As The Washington Post reports, “traffic stops for minor infractions such as speeding or equipment violations are increasingly used as a pretext for officers to seize cash from drivers.” Since 2001, police have seized $2.5 billion from people who were not charged with a crime and without a warrant being issued.

If you’re starting to feel somewhat overwhelmed, intimidated and fearful for your life and your property, you should be. Never before have “we the people” been so seemingly defenseless in the face of police misconduct, lacking advocates in the courts and in the legislatures.

From the moment those lights start flashing and that siren goes off, we’re all in the same boat: we must pull over. However, it’s what happens after you’ve been pulled over that’s critical. Survival is the key.

However, there is a price for asserting one’s rights.

So if you don’t want to get probed, poked, pinched, tasered, tackled, searched, seized, stripped, manhandled, arrested, shot, or killed, don’t say, do or even suggest anything that even hints of noncompliance when it comes to interactions with police.

“Comply or die” has become the new maxim for the American police state.

Then again, not even compliance is a guarantee of safety anymore. As I point out in my book Battlefield America: The War on the American People, “we the people” are at the mercy of law enforcement officers who have almost absolute discretion to decide who is a threat, what constitutes resistance, and how harshly they can deal with the citizens they were appointed to “serve and protect.”

Sad, isn’t it, how quickly we have gone from a nation of laws—where the least among us had just as much right to be treated with dignity and respect as the next person (in principle, at least)—to a nation of law enforcers (revenue collectors with weapons) who treat us all like suspects and criminals?

Clearly, the language of freedom is no longer the common tongue spoken by the citizenry and their government. With the government having shifted into a language of force, “we the people” have been reduced to suspects in a surveillance state, criminals in a police state, and enemy combatants in a military empire.