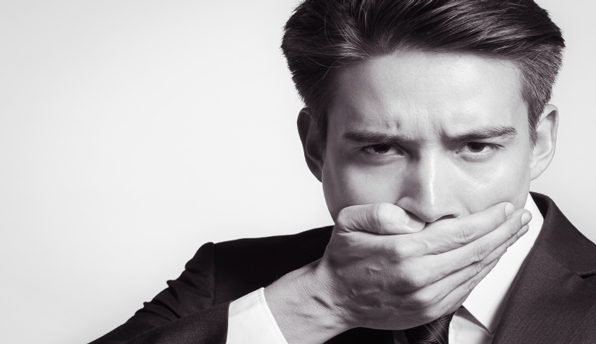 It is now five years since the crash of 2008. Today's media and much of our academic crowd, of course, believe that the crisis has been handled, and that we can settle back to "business as usual."

But such pundits are so immersed in the Keynesian paradigm that they are viewing only the trees, not the forest. They are viewing only the specific recessionary cycles and not connecting such cycles to the big picture of the overall boom / bust nature of 20th century economics. Since they have accepted Keynesianism as valid, they see in today's economy normal activity and business cycles. They see correct Federal Reserve policy and legitimate fiscal policy on the part of the Federal Government. But this view comes from a false concept of economics and from a major failing of humans – their use of "euphemism" to evade the fact they are trying to circumvent natural law so as to get something for nothing.

For example, almost all of today's scholars and pundits use the term "liquidity" to describe what the Federal Reserve injects into the economy to manage it. Tune into CNBC or Fox Business on any given day and you will hear repeatedly about how the Fed needs to "inject liquidity" into the system.

But if we do not use euphemism in this discussion and call "liquidity" what it actually is, then we get a considerably different picture about what the Fed is doing. The Fed is not injecting "liquidity" into the system when it performs its FOMC functions. It is injecting "credit" into the system. But what is credit? Simply another word for DEBT. So this is what the Fed is injecting into our economy when it performs its Keynesian mandated functions. It is injecting massive DEBT into the system, which means it is enticing Americans to go substantially in debt to live their lives and likewise with the government to perform its functions.

This is the essence of Keynesian theory: Economic growth and wealth can be brought about by government injection of debt into the marketplace. Let's examine this premise more closely and then look into the "ugly secret" that no one talks about.

The flaw in Keynesian theory is that central bank credit expansion ultimately leads to massive "debt saturation" and "malinvestment" throughout the economy, which reverses the boom that the credit expansion was meant to perpetuate. Ultimately, the system must go through a severe purging in order to eliminate the heavy levels of debt and malinvestment before a genuine growth cycle can be reignited. Such a purging leads to a mega-crisis that brings on either severe deflation or inflation, or a combination of the two that is called stagflation. Which one of the three occurs will depend on how the political-monetary authorities in charge react to the events that unfold.

This crisis takes place because central bank credit expansion brings about healthy growth like heroin brings about wellbeing. In the early stages of the process businesses flourish and the Fed is able to manipulate expansions and slowdowns in a tolerable way. But once an economy becomes thoroughly "debt saturated" from the massive injections of credit over the years, borrowing drops off drastically. This slows the rate of monetary growth by inhibiting the central bank's power to pyramid credit, which threatens the economy with a deflationary crash. If the Fed tries to stop the deflation with faster and heavier credit expansion, it brings on hyperinflation and then a crash. In addition to the debt saturation, Fed credit expansion also creates widespread "malinvestment," i.e., capital expenditures for which there is no genuine demand and which cannot be sustained.

This is the basic Austrian business cycle theory of Ludwig von Mises and Nobel prize winner Friedrich Hayek, first formulated in the 1920s, and which predicted the Great Depression of the 1930s. Eventually, large loads of debt and malinvestment must build up in any country that expands credit in its banking system irresponsibly. Such debt loads must be worked off before real demand and growth can be restored, which requires a recessionary period. If the credit / debt expansion has reached a high enough level, the result will be a more severe deflationary collapse.

What's important, however, is to grasp how fast debt is growing and what its relationship is to national income. The chart below shows us what the growth of just "funded debt" in America looked like between 1957 and 2008: 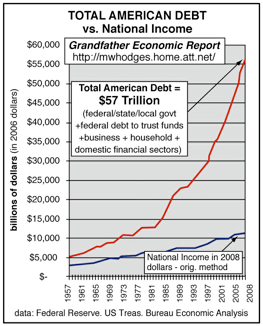 Notice how the red debt line in the above chart is growing at a much faster rate than the blue national income line. This means we are assuming larger and larger amounts of debt each year to maintain a steady amount of national income growth. Herein lies the root of our economic crisis. Since money creation today is primarily Fed credit creation, the Fed's monetary policies are what pushed the country into the economic crash of 2008. Here's why: 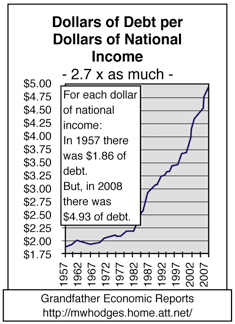 What this means is that new debt in a Keynesian economy must be increased every decade at an accelerating rate in order to keep the economy continually growing. If the Fed does not succeed in getting us to assume larger and larger doses of debt every decade, it runs the risk of the economy's business and investment sectors starting to deflate. This is the ugly secret of Keynesianism, never acknowledged publicly and never taught in our schools. But Fed officials know very well that if they were to slow down their increase of debt creation for a few years so as to bring the country's debt accumulation into balance with its debt liquidation, it would dangerously deflate the economy.

Thus, overall debt must always rise to unmanageable levels in the Keynesian model because society's annual "debt assumption" needs to exceed its annual "debt liquidation" if the Fed is to maintain economic growth. The fact that aggregate debt has been increasing relentlessly for over 50 years clearly demonstrates this. And since there is always a limit to how much debt any person or any country can tolerate, the credit bubbles upon which Keynesians have structured our economy must always run up against an impenetrable ceiling and eventually collapse into a prolonged depression.

This is why Ludwig von Mises is right in his famous warning that central bank credit expansion, if not voluntarily curtailed, must ultimately result in a collapse of the monetary system and the economy structured upon it. This is why the Mises / Hayek business cycle theory formulated in the 1920s is true, and why Keynes's "new economics" formulated in the 1930s is false. The Keynesian model is dangerously flawed and must ultimately bring monetary destruction to any country that embraces it.

This is all ignored by our mainstream punditry. In their minds the 2008 crash was "caused" by growth of derivative speculation, the collapse of the housing bubble and the fall of prominent corporate-financial giants such as AIG and Lehman Brothers. On the contrary, these factors were merely concomitants or steps along the way. To understand the real (or root) cause of the meltdown, we have to ask what lies behind the rise in derivatives, the housing bubble and the excesses of AIG and Wall Street investment banks. We have to look at the big picture.

The root cause lying behind all the Wall Street excess and bank failures was the vast credit inflation and increase of debt that built up in society over the years. Banks are businesses like all others. If they take on too much debt so as to commit their portfolios to highly speculative ventures such as derivatives, then they will eventually risk collapse. If they are prominent institutions such as AIG, when they go down they will act as triggers that ignite further collapses.

But in order for such a wave of collapses to take place, there first has to be an underlying "debt saturation" throughout the economy. This debt saturation, created by the Fed's excessive creation of credit, is being evaded in all the establishment explanations of our present economic crisis. And, of course, no one dares to talk about the "ugly secret" of a Keynesian economy, that in order for it to produce growth, per-capita debt must be continually increased at an accelerating rate.

The Appearance of Workability

Thus it is the monstrous credit / debt spirals orchestrated by the Fed over the past decades that have brought us the economic crisis in which we are presently embroiled. What lulled our authorities into this nightmare is that Keynesian economics appears to work at first. For example, the Keynesian debt train that we boarded in 1936 basically chugged along in the 1950s and 1960s with no apparent difficulties. It created mild amounts of debt and appeared to uncritical eyes to be a legitimate means to run an economy. But by the 1970s the debt train began picking up speed in order to keep the GDP expanding. By the time Alan Greenspan and the 1990s arrived, our Keynesian debt train was huffing and puffing at great speed. By 2005 it was literally streaking down the tracks in order to keep the economy afloat. And by 2008 it derailed.

The speed and the amount of the necessary debt creation to float a Keynesian economy have now overwhelmed the consumers and businesses of America. Fear consumes them, and they have undergone a dramatic change of mood in which they refuse to borrow in any substantial amounts. They are ignoring the credit offerings of the Fed in order to bring back fiscal sanity to their lives and are trying to pay off debt instead of incurring more debt. This is reducing the amount of credit desire among consumers and businesses. Keynes failed to factor this "human reaction" into his theoretical analysis.

This reduction of "credit desire" on the part of humans will stifle the Fed's ability to ignite any recovery. So even if the economy has been saved from a 1930s-style depression, it's only a temporary salvation. It does not mean our problems of low wealth creation, anemic growth and unemployment have been solved. What it means is that massive "injections of debt" have been thrust into our economy to ward off a massive deflation. But this is a false cure orchestrated monetarily by government rather than productively by free enterprise.

It's as if the drug addict began injecting heroin again and pronounced himself "cured" from his physiological depression, when what he should do is rest his burnt-out system through abstinence while initiating a regimen of high-quality nutrition to rebuild his debilitated physiology. The parallel between physiological drug addiction for individuals and economic liquidity addiction for societies explains our crisis.

As Ludwig von Mises warned us decades ago in his great classic, Human Action: "There is no means of avoiding the final collapse of a boom brought about by credit expansion. The alternative is only whether the crisis should come sooner as the result of a voluntary abandonment of further credit expansion, or later as a final and total catastrophe of the currency system involved."

The Federal Reserve, unfortunately, has chosen the latter option. Thus, catastrophe looms ahead, maybe sooner than we think.