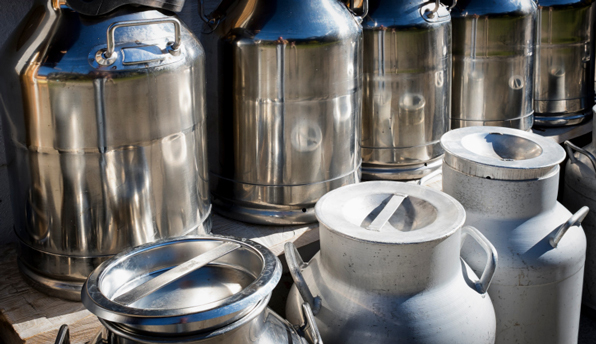 Congressman Thomas Massie (R-KY) and a bipartisan coalition of lawmakers have recently introduced legislation to allow for the sale of raw milk, i.e., unpasteurized milk. Their Milk Freedom Act of 2014 would make it legal for "certified dairy farmers" to sell unpasteurized milk products without harassment and criminal prosecution on the part of the FDA. If enacted, this would be a major victory for those who are health conscious and understand the grievous misperception by our medical establishment regarding the safety of raw milk.

The distribution of raw milk has been banned in the U.S. since inception of the pasteurization laws in the 1920s. The American Medical Association together with the FDA brought about this ban of raw milk because of its susceptibility to being a carrier for certain infectious microbes such as salmonella.

The error here is that it was never "raw milk" that was a problem. It was "warm raw milk" produced in crowded, unsanitary conditions from grain-fed instead of grass-fed cows that was prone to an unhealthy level of microbes. Grass-fed cows produce a milk with natural "inhibins," anti-microbial agents that keep pathogens low, while grain-fed cows do not produce high "inhibin" levels in their milk.

Therefore, if milk is produced in clean, uncrowded conditions from grass-fed cows, and kept cold, it remains as safe as any other food. The farmers of America produced milk under these conditions for their own consumption throughout the nineteenth century. They stored the milk from their grass-fed cows in metal cans immersed in cold water in shaded "milk houses" to keep it cool. It was relatively clean and safe and did not lead to outbreaks of disease.

It was when our economy became urbanized and industrialized after the turn of the century that milk became a problem. This was because it was now produced in large, crowded, unsanitary, dairy farms and transported into city areas for sale in warm trucks.

So there was a need for legislation to prohibit the sale and distribution of "raw" milk products between 1920 and 1960. But by the mid-1960s, the transport industry had developed refrigerated trucks to keep milk cold while in transit. Dairy farms now had refrigerated storage vats that were superior to the traditional "milk houses" of private farmers giving the milk up to 14 days before souring. The need for grass-fed cows in spatial pastures instead of grain-fed cows in crowded quarters was now understood. Cleanliness of conditions was mandated and prevalent. When the milk was delivered to retail stores, it was now placed in refrigerators for sale. Consequently pathogens did not build up in the milk from the time it left the cow to when the consumer drank it. Thus, it was no longer necessary to prohibit the sale of raw milk.

Unfortunately, the FDA and the consumer protection bureaucracies of Washington had grown to monstrous size by then and they were not about to relinquish the power they wielded over dairy farmers, transporters and retailers. They remained oblivious to the real issue involved: Raw milk is not dangerous as long as it comes from clean, disease-free, grass-fed cows and is properly refrigerated throughout the production and sale process. This creates what is termed today "certified raw milk," i.e., safe milk.

So the legislation being introduced by Congressman Massie and his colleagues is great news to those of us in the freedom movement who are aware of the spectacular health properties of raw milk and its superiority over pasteurized milk. We see the problem from a much different perspective than the medical establishment and its henchmen at the FDA. We understand that degenerative diseases (such as cancer, diabetes, arthritis, etc.) are, to a large degree, brought about because of our modern corrupted diet with its low nutrient value. Raw milk is the summum bonum of nutrition and it can help man achieve a far superior level of health to what he presently experiences.

But in order to bring about this improvement of mankind's health, the ignorance that prevails in today's medical establishment must be overcome. Our medical doctors and scientists are certainly very smart people. But they are ignorant of the truth.

As comparison, consider our former Fed chief, Ben Bernanke. He is a brilliant intellect. But unfortunately, he is ignorant of the truth in the field of economics. He doesn't grasp the immense fallacies in the Keynesian paradigm he has espoused throughout his career. As a consequence our country suffers greatly.

This is the intellectual history of man. Brilliance in our intellectual class does not guarantee possession of the truth. The sages of every era are so often wracked with ignorance of the truth that one wonders how we ever climbed from the cave and produce a free civilization. The priests of the Middle Ages, the political thinkers of monarchical Europe, the bloodletters of the nineteenth century were all brilliant minds, but "ignorant of the truth." Our era today is equally wracked with brilliant economists, political philosophers and medical scientists who are ignorant of the truth.

Why Raw Milk Is Superior

The reason why raw milk is so superior lies in what happens to the protein molecule when it is cooked, i.e., pasteurized in the case of milk. The famous scientist, Dr. Francis M. Pottenger, Jr., showed the danger of cooking protein in his experiments in the 1930s. Over a ten-year period between 1932 and 1942, he and his colleagues conducted clinical studies on over 600 cats.1 The cats remained in excellent health on a diet of raw protein alone. All the feeding was supervised by Pottenger's medical group, and all experiments were carefully controlled. The results, writes a contemporary, Dr. Henry G. Bieler, "proved beyond question the unhealthy nature of cooked animal protein…. No cats in the entire experiment – often siblings of the same litter – developed disease as long as they remained on a raw protein diet. In fact, they lived to a ripe old age."2

Dr. Pottenger's nutritional/pathological findings were supervised in consultation with Alvin G. Foord, M.D., professor of pathology at the University of Southern California and pathologist at the Huntington Memorial Hospital in Pasadena.4 Their work met the most rigorous scientific standards of the day. Their results are so convincingly obvious that there is no room for doubt of their accuracy. The fact that the world chooses to ignore the Pottenger-Foord findings is attributable to humanity's desire to flee from reality and avoid facing the tough truths of life.

Man has been on this planet for approximately 5 million years. But he discovered fire only about 400,000 years ago. So the bulk of his evolutionary development (4.6 million years) took place on raw protein. This is why he needs it. Milk is a perfect source for it. The fact that our government prohibits us from purchasing raw milk is inexcusable.

Detractors to the Pottenger-Bieler thesis on raw protein and its connection to health claim that cats are not humans, and that it is wrong to extrapolate from one to the other. But their claim is in error, for it ignores the fundamental premise that certain natural laws of existence are applicable to all forms of life. For instance, the law of gravity affects cats and humans equally. And the same goes for certain physiological laws such as the necessity of raw protein for long term, disease-free health among mammals. Both cats and humans are mammals.

Cooking protein alters it molecularly. The protein molecules are changed from the "hydrophile colloid" form to the "hydrophobe colloid" form. According to Dr. Bieler, they then cannot fulfill protein's role adequately, which is to produce growth, rebuild tissue, and restore the body's integrity every 24 hours from the wear and tear of stressful life.5

The Safety of Raw Milk

Raw milk consumers represent only 3 percent of the population, so its 103 figure has to be multiplied by a factor of 33.3 to make it statistically meaningful. When this is done, the illnesses from raw certified milk are 3,430 as compared to 468,000 from meat and 612,000 from poultry.

The FDA estimates that in the ten-year period between 1996 and 2005, fresh produce was responsible for over 8,000 E. coli infections in the U.S., and eggs were responsible for over 6,500 infections. The FDA also cites several outbreaks of E.coli traceable to raw milk over a five-year period that produced fewer than 50 infections.7 To make these figures statistically comparable, we need to multiply raw milk's five-year figure by 2 and also by 33.3. The total for raw milk becomes 3,330. Certified raw milk is, thus, safer than the fresh produce and eggs that we eat every day. There is no need to prohibit its sale.

Life is filled with various degrees of risk that free men and women are willing to take. We don't stop eating produce and eggs because occasionally illness results. We don't stop flying in airplanes because crashes occur. Things must be kept in perspective, which is not something that government wants to do.

It is quite exasperating to be aware of all this and try to convey it to the public. The demonizing of raw milk by the FDA and the medical establishment overpower even strong, independent people who have no problem challenging establishment fallacies in the fields of economics and politics. But when health and medicine are involved, they often suspend their power of judgment and obediently agree to whatever their doctor says no matter how much in conflict it is with reason and science. They think of doctors as some kind of gods, when they're nothing but smart humans just as capable of being corrupted by a false paradigm as our economists and political philosophers. Today's doctors are "ignorant of the truth," but sadly, their patients continue to obey them with an undeserved reverence for irrational prescriptive advice regarding the consumption of raw milk.

The scientific work of Francis M. Pottenger, M.D. and Alvin G. Foord, M.D. can be found in their book, Pottenger's Cats: A Study in Nutrition. The work of Henry G. Bieler, M.D. on health and nutritional issues can be found in his book, Food Is Your Best Medicine. In addition, Dr. Ron Schmid's magisterial work, The Untold Story of Milk: The History, Politics and Science of Nature's Perfect Food, brilliantly sums up the case for raw milk. All three of these books are in print at Amazon. For more information on this controversial issue, hundreds of questions are answered at www.realmilk.com.

The experiments of Pottenger, Foord and Bieler are irrefutable. They demonstrate to any objective person that cooked protein will not maintain a healthy or long-lived existence. The fact that such a monumental truth is not common knowledge today in medical schools is a testament to the ignorance and dogma that control so much of the scientific endeavors of man. Only when our medical/nutritional experts begin to apply this truth to the human diet will we start to achieve the true level of health that is our birthright.