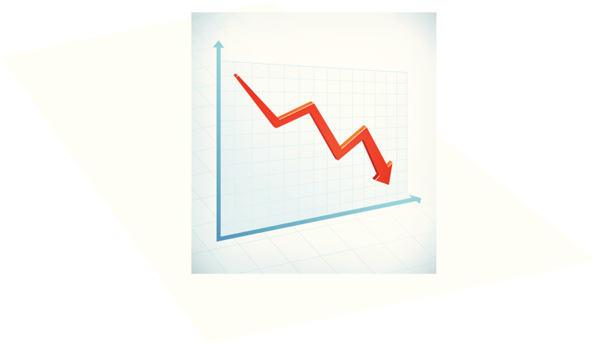 The third and final estimate (until the annual GDP revisions) of first quarter 2014 real GDP growth released June 25 by the US Bureau of Economic Analysis was a 2.9% contraction in GDP growth, a 5.5 percentage point difference from the January forecast of 2.6% growth. Apparently, the first quarter contraction was dismissed by those speculating in equities as weather related, as stock averages rose with the bad news.

Stock market participants might be in for a second quarter surprise. The result of many years of changes made to the official inflation measures is a substantially understated inflation rate. John Williams (www.shadowstats.com) provides inflation estimates based on previous official methodology when the Consumer Price Index still represented the cost of a constant standard of living. The 1.26% inflation measure used to deflate first quarter nominal GDP is unrealistic, as Americans who make purchases are aware.

Realistic economic analysis is a rarity. The financial press echoes Wall Street, and Wall Street economists are paid to help sell financial instruments. Gloomy analysis is frowned upon. Even negative quarters are given a positive spin.

Years of understatement of inflation has resulted in years of overstatement of GDP growth. Thinking about the many years of misstatement, we realized that the typical computation in nominal terms of the ratio of debt to GDP is seriously misleading.

Consider that debt is issued in nominal terms and repaid in nominal terms (except for a few Treasury bonds with inflation adjustments). However, nominal wealth or nominal GDP overstates real economic strength. The debt is growing, but both the nominal and real values of the output of goods and services are not keeping up with the rise in debt.

To understand how risky the rise of debt is, nominal debt must be compared to real GDP. Spin masters might dismiss this computation as comparing apples to oranges, but such a charge constitutes denial that the ratio of nominal debt to nominal GDP understates the wealth dilution caused by the government's ability to issue and repay debt in nominal dollars. We know that inflation favors debtors, because debts can be repaid in inflated dollars.

The graph below shows three different debt to GDP ratios. The bottom line is nominal debt to nominal GDP, the financial press ratio. The middle line is the ratio of nominal debt to the official measure of real GDP. The top line is the ratio of nominal GDP to Shadowstats' corrected measure of real GDP that puts back in some of the inflation that is no longer included in official measures. The basis for this corrected measure is also 2000, but as the GDP number for 2000 is lower due to correction, this graph begins with the ratio at a slightly higher point. 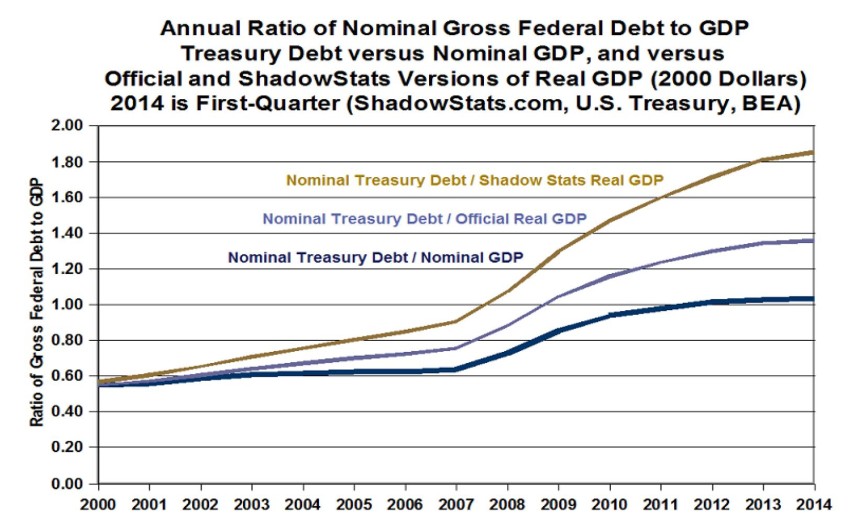 The nominal debt to GDP ratio shows that as of the end of the first quarter of 2014 total US Treasury debt outstanding is 103 percent of US GDP.

The ratio of Treasury debt to official real GDP shows debt at 136% of GDP.

The ratio of debt to real GDP deflated with more a more realistic measure of inflation, one more in keeping with the experience of consumers, puts US public debt at 185% of GDP. In other words, the burden of US debt on the real economy is almost twice the burden that is normally perceived. 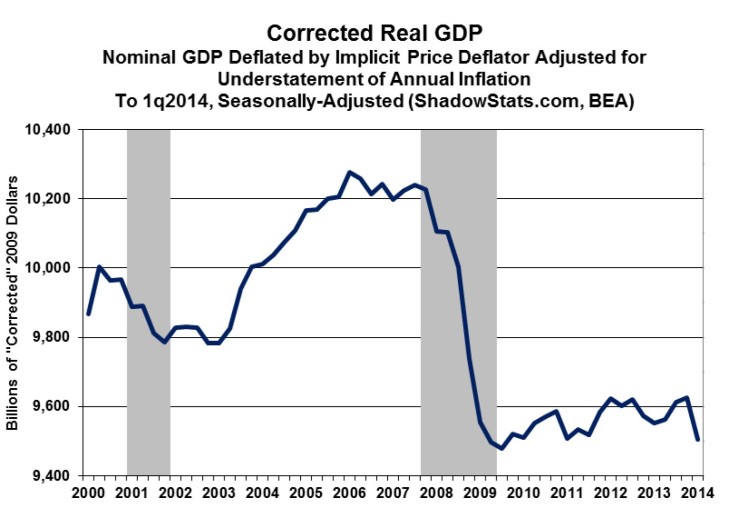 We have calculated the ratios of US public debt to nominal GDP and to two measures of real GDP. The ratios of debt to GDP would be much higher if we used total credit outstanding, or total public and private debt, and if we used the government's unfunded liabilities. The fact seems clear that debt is a major and unappreciated issue for the US economy. The enormous debt, especially with the middle class economy largely offshored, implies substantially lower living standards for the 99 percent.

The first quarter contraction, especially our corrected number, implies a second quarter negative real GDP. In other words, the years of Quantitative Easing (money printing) by the Federal Reserve has not resulted in economic recovery from the 2008 downturn and has not prevented further contraction.

Massive money creation and huge fiscal deficits have protected the balance sheets of "banks too big to fail" but have harmed the American people. Retirees and pension funds have been deprived for years of interest income as the Federal Reserve engineered zero or negative interest rates for the sake of a handful of oversized banks.

The extraordinary creation of new dollars diluted the dollars held by peoples, companies, institutions, and central banks throughout the world, raising fears that the dollar would lose exchange value and its role as world reserve currency.

Washington's use of financial sanctions to force other countries to bend to Washington's will is causing countries to leave the dollar payments system. Russian President Vladimir Putin's advisor has said that the dollar must be crashed as the only way to prevent US aggression. The Chinese have called for "de-americanizing the world."

The imperialistic US Foreign Account Tax Compliance Act (FATCA), which comes into full force July 1, 2015, imposes such heavy reporting costs on foreign financial institutions that these institutions might opt out of dollar transactions. All together, the result could be a serious tumble in the value of the US dollar, more wealth contraction, higher inflation via import prices, and less US wealth available to support US debt.

If Washington is this unaware of its budget constraints and its financial predicament, it cannot be long before Americans experience economic catastrophe.

This article, by Paul Craig Roberts, Dave Kranzler and John Williams, was contributed by PaulCraigRoberts.org.

John Williams, an expert on government economic statistics, has been a private consulting economist for more than thirty years (www.shadowstats.com). Dave Kranzler (www.investmentresearchdynamics.com) has years of experience in financial markets. Paul Craig Roberts is an economist and former Assistant Secretary of the US Treasury for Economic Policy.