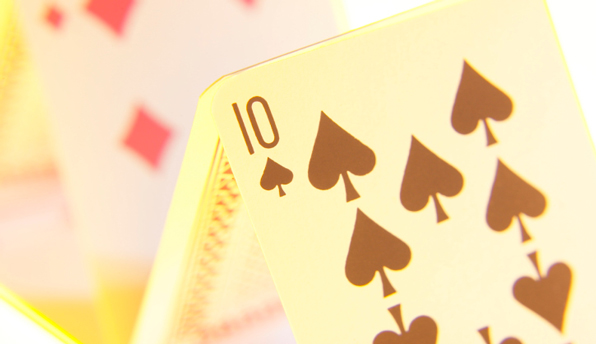 EDITORIAL
US Economy Is a House of Cards
By Paul Craig Roberts - May 01, 2014

The US economy is a house of cards. Every aspect of it is fraudulent, and the illusion of recovery is created with fraudulent statistics.

American capitalism itself is an illusion. All financial markets are rigged. Massive liquidity poured into financial markets by the Federal Reserve's Quantitative Easing inflates stock and bond prices and drives interest rates, which are supposed to be a measure of the cost of capital, to zero or negative, with the implication that capital is so abundant that its cost is zero and can be had for free. Large enterprises, such as mega-banks and auto manufacturers, that go bankrupt are not permitted to fail. Instead, public debt and money creation are used to cover private losses and keep corporations "too big to fail" afloat at the expense not of shareholders but of people who do not own the shares of the corporations.

Profits are no longer a measure that social welfare is being served by capitalism's efficient use of resources when profits are achieved by substituting cheaper foreign labor for domestic labor, with resultant decline in consumer purchasing power and rise in income and wealth inequality. In the 21st century, the era of jobs offshoring, the US has experienced an unprecedented explosion in income and wealth inequality. I have made reference to this hard evidence of the failure of capitalism to provide for the social welfare in the traditional economic sense in my book, The Failure of Laissez Faire Capitalism, and Thomas Piketty's just published book, Capital in the 21st Century, has brought an alarming picture of reality to insouciant economists, such as Paul Krugman. As worrisome as Piketty's picture is of inequality, I agree with Michael Hudson that the situation is worse than Piketty describes.

Capitalism has been transformed by powerful private interests whose control over governments, courts, and regulatory agencies has turned capitalism into a looting mechanism. Wall Street no longer performs any positive function. Wall Street is a looting mechanism, a deadweight loss to society. Wall Street makes profits by front-running trades with fast computers, by selling fraudulent financial instruments that it is betting against as investment grade securities, by leveraging equity to unprecedented heights, making bets that cannot be covered, and by rigging all commodity markets.

The Federal Reserve and the US Treasury's "Plunge Protection Team" aid the looting by supporting the stock market with purchases of stock futures, and protect the dollar from the extraordinary money-printing by selling naked shorts into the Comex gold futures market.

The US economy no longer is based on education, hard work, free market prices and the accountability that real free markets impose. Instead, the US economy is based on manipulation of prices, speculative control of commodities, support of the dollar by Washington's puppet states, manipulated and falsified official statistics, propaganda from the financial media, and inertia by countries, such as Russia and China, who are directly harmed, both economically and politically, by the dollar payments system.

But it is not a salvation for Americans who live under Washington's rule. As all statistical evidence makes completely clear, the share of income and wealth going to the bulk of the US population is declining. This decline means the end of the consumer market that has been the mainstay of the US economy. Now that the mega-rich have even more disproportionate shares of the income and wealth, what happens to an economy based on selling imports and off-shored production of goods and services to a domestic consumer market? How do the vast majority of Americans purchase more when their incomes have not grown for years and have even declined and they are too impoverished to borrow more from banks that won't lend?

The America in which I grew up was self-sufficient. Foreign trade was a small part of the economy. When I was Assistant Secretary of the Treasury, the US still had a trade surplus except for oil. Offshoring of America's jobs had not begun, and US earnings on its foreign investments exceeded foreign earnings on US investments. Therefore, America's earnings abroad covered its energy deficit in its balance of trade.

The economic stability achieved during the Reagan administration was shattered by Wall Street greed. Wall Street threatened corporations with takeovers if the corporations did not produce higher profits by relocating their production of goods and services for American markets abroad. The lower labor costs boosted earnings and stock prices and satisfied Wall Street's cravings for ever more earnings, but brought an end to the rise in US living standards except for the mega-rich. Financial deregulation loaded the economy with the risks of asset bubbles.

Americans are an amazingly insouciant people. By now any other people would have burnt Wall Street to the ground.

Washington has unique subjects. Americans will take endless abuse and blame some outside government for their predicament–Iraq, Afghanistan, Libya, China, Russia. Such an insouciant and passive people are ideal targets for looting, and their economy, hollowed-out by looting, is a house of cards.