EDITORIAL
Washington's Hegemonic Ambitions Are Not in Sync With Its Faltering Economy
By Paul Craig Roberts - January 08, 2013

In November the largest chunk of new jobs came from retail and wholesale trade. Businesses gearing up for Christmas sales added 65,700 jobs or 45% of November's 146,000 jobs gain. With December sales a disappointment, these jobs are likely to reverse when the January payroll jobs report comes out in February. Family Dollar Stores CEO Howard Levine told analysts that his company's customers were unable to afford toys this holiday season and focused instead on basic needs such as food. Levine said that his customers "clearly don't have as much for discretionary purchases as they once did."

Obviously, the economy is not going anywhere except down. It takes approximately 150,000 new jobs each month to stay even with population growth and new entrants into the work force. Few of the jobs that are being created pay well, and the constant, consistent demand for more poorly paid waitresses, bartenders and hospital orderlies is difficult to believe. If Americans cannot afford toys for their kids' Christmas, how can they afford to eat and drink out?

Media spin seeks to create a recovery out of thin air, but these graphs from John Williams (shadowstats.com) show the reality: 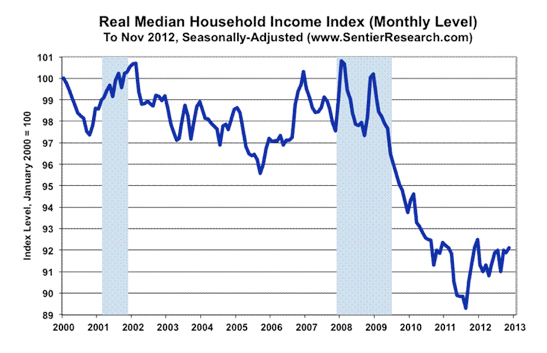 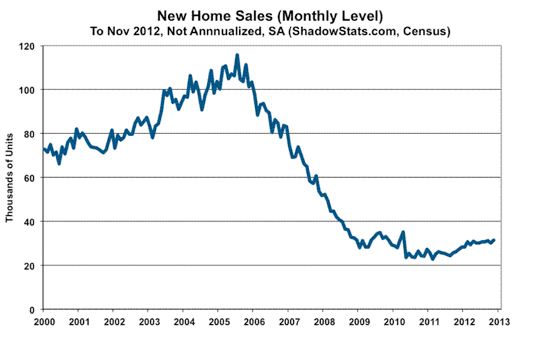 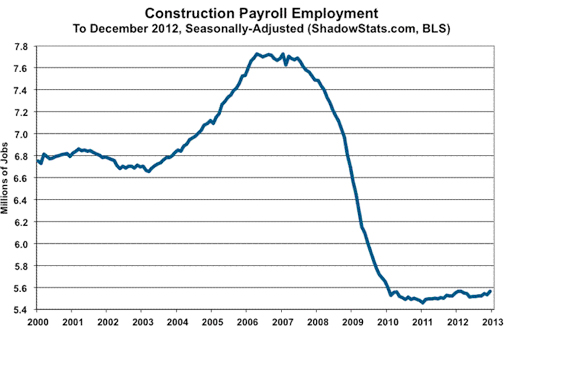 In 1994 the US government defined out of existence unemployed Americans who have been discouraged from finding work for more than a year. John Williams estimates the long term discouraged workers. When his estimate is added to the U.6 measure, the US unemployment rate stands at 23%, three times the reported rate.

The rate of unemployment is so high because millions of US jobs have been offshored and given to Chinese, Indian, and other workers and because remaining businesses have been concentrated in few hands in violation of the anti-trust laws. (Go to this URL to see the concentration of the media: frugaldad.com/2011/11/22/media-consolidation-infographic/ )

We need to be concerned about a financial media and economics profession that believes a recovery is underway when the unemployment rate is so high and the real median income is so low. It is a mystery how any set of policymakers could possibly have believed that a country whose economy is driven by consumer expenditures can continue to expand when the jobs that produce the incomes that drive the economy are given to foreigners in foreign lands.

Essentially, Americans were told a packet of lies designed to win their gullible acceptance to an economy that produces high returns for Wall Street, shareholders, and corporate executives at the expense of everyone else in the country. The wage savings from the use of overseas labor means large rewards for the one percent and [crumbs for] Family Dollar customers who cannot afford to buy toys for their children at Christmas.

This column was originally published at paulcraigroberts.org and is reprinted here with the author's permission. Paul Craig Roberts was Assistant Secretary of the Treasury for Economic Policy and associate editor of the Wall Street Journal, columnist for Business Week, Scripps Howard News Service, and Creators Syndicate and has had many university appointments.