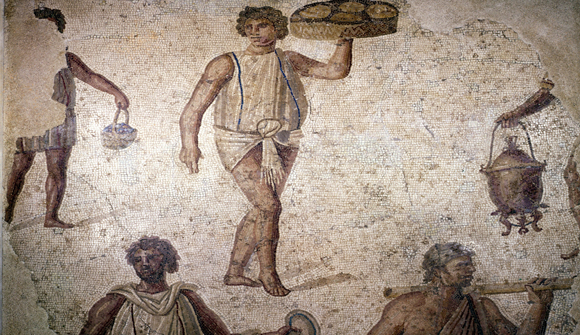 If you want to analyze a large economic system, the best way to start is by tracking its surplus. Who gathers the surplus? Where does it go? Who decides? And that applies to our modern systems just as well as it does historical systems.

THE DEMOCRATIZATION OF PLUNDER

In the empires of the ancient world, plunder was reserved to the kings and to the emperors (the kings of kings). These rulers had the right to plunder and would use violence to assure that they had no competitors. Each city was a separate unit, and its surplus production went directly up the hierarchy to a local ruler, with a portion of it continuing to a ruler above that one. This surplus allowed the rulers to live lush lives and to build the great monuments of the old world: Pyramids, hanging gardens, ziggurats, colossal statues, and the like. It was this hierarchical movement of surplus production that made monuments proliferate during this time.

The Greeks and early Romans, however, changed this arrangement and democratized the plunder. This model involved each property holder owning a number of slaves, whose work in the field he carefully supervised and very often assisted personally. The surplus production of this small group of slaves became the property of the landowner, which allowed capital to be used in productive endeavors, and very effectively so.

But the improved use of surplus capital was not the only attribute to this new arrangement. It also turned thousands of people into small-scale plunderers. This had a range of effects, which are difficult to properly weigh at our current distance of over two thousand years. However, some of the major effects seem to have been these:

It is important to understand the ways in which the economics of the classical world differed from the economics we are familiar with.

First of all, the mechanism of economic growth was the social organization of slavery. This was not, during the centuries of the Republic, anything like 18th century slave gangs on plantations: The slaveowners worked closely with their slaves and were very often in the fields with them. But, since the slaves could not be holders of property, the surplus that they produced was taken over by the slaveowner and became investment capital. This was then applied to further productive uses. And, since the owner understood the agricultural process, he was usually an excellent judge of where investment was best applied.

This system worked quite well during the Republic. The slaves were certainly shortchanged in the bargain, but the slavery of those days was not equivalent to the brutal slavery that appeared at other places and times. Slaves were valued, commonly freed or adopted, and could engage in independent activities. Nonetheless, their surplus production belonged to their owner. A Roman (or Greek) of the time would justify this as the only conceivable social organization that could produce progress. The map below shows the expansion of Rome under the Republic.

Another great difference between the modern and classical world was the currency. Minted coin was the sole monetary instrument, and there was no machinery for creating credit. There were no banks in our sense, and only two sources of wealth: agricultural and mineral, with the former being more important. This had multiple consequences.

One consequence was that funding military expeditions was difficult. This restrained unnecessary military campaigns. (Whereas today, with our fiat currency system, money can simply be created on demand.) For example, in 483 B.C. the Athenians had strained relations with the Persians, but had not done much about it. Then, the lead mines at Sounion suddenly revealed a fabulous seam of silver. Immediately, the leaders of Athens built a fleet and defeated the Persians at Salamis.

So, excess wealth could be gathered from the earth, erratically though dramatically, in the form of precious metals. Or, it could be produced regularly and predictably from the farming-slavery culture in the form of foodstuffs.

There was much concern in the ancient world over the storage and retention of gold and silver. One of the ancient laws of Rome (contained in their Twelve Tables of Roman Law) stated that: Gold, no matter in what form it may be present, shall, by all means, be removed from the corpse at the time of the funeral. They did not allow gold to be wasted. (They did make exceptions for the dead person's gold dentistry.)

At the same time, many problems we encounter, such as currency exchange rates and volatile currency values, were complete non-issues. Gold was gold, no matter whose name was slapped on the coin, and all forms of gold or silver were of equal value per ounce. This greatly aided commerce and trade.

Another important factor to include was the attitude toward wealth. Members of the classical civilizations tended to be moderate in their attitudes toward money. They refused to regard either profit or power as goals of life, but rather tended to regard honor and the esteem of one's equals as goals that were at least as important as simple accumulation. The early Romans, being instructed by Greek mythology directed toward the inner man, were imbued with an appreciation for self-development. They valued this more highly than mere external things such as coins. In this way at least, it was a more elegant time.

At a personal level, credit was provided in the form of transactions between friends, neighbors and relations. There were no securities, interest or even written agreements, which implied distrust. Aristocrats, for example, felt an obligation to take on the debts of friends. Cicero, the great jurist, distinguishes two categories of givers: those who squander their money on public banquets, food doles, gladiatorial shows and wild beast fights (to gain political credit), and those who take over friends' debts, help in providing dowries for their daughters or assisting them in acquiring property. Each man was, in effect, his own bank.