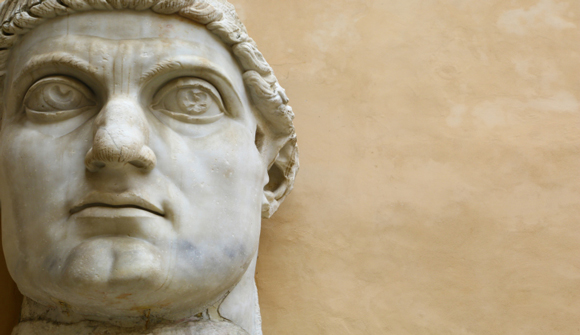 Empires beyond their limits do their best to enforce "austerity" upon their populace, but never agree to curtail their very expensive grandeur. This afflicted Rome, much the same as it afflicts today's European powers. Today we'll see how one Roman emperor found a way out of this predicament.

Plato's books were widely distributed during the time of the Roman Empire. Nonetheless, as mentioned previously, their ideas were not implemented on a large scale, simply because there was an existing structure in place and no one was going to try and rip it down and attempt something utterly new. The rotting and inevitable doom of Rome, however, provided them with an opportunity.

The Crisis of the 3rd Century marked the end of Rome's strength, and the collapse of their method of expansion. They had reached their limit and could no longer bring in masses of new slaves and make huge land grants to prominent families. The Empire nearly collapsed and there was no way out of the dilemma; switching to a new ideology would be to admit failure and would ruin Rome's sense of legitimacy.

For the first time in centuries, Rome had to worry about invasions. They could no longer drive barbarians further and further away, and their economy was falling apart without new conquests. A return to their early days was no longer practical. Power had long since left the virtuous farmers and had been siphoned away to a massive political center which would never agree to dismantle itself. They had the power and they would not give it up. The distributed power model of Rome's early days was hopelessly lost.

In 273 A.D., Emperor Aurelian finished encircling the capital itself with a massive wall, which had a perimeter that measured close to 20 kilometers. Rome formally remained the capital of the empire, but emperors spent less and less time there.

It was now clear that the empire was vulnerable to serial attack, and the last hundred years of the Roman Empire in the West were dominated by Rome's political structure moving in and out of relationships with various tribes of Germanic Goths and non-Germanic Huns who wanted to settle within the Empire. Immoral emperors had made a mockery of Rome's virtues and there was no legitimacy left – only raw power… and that had faltered. The original mechanism of production had been eliminated and the new mechanism had failed. Rome was doomed.

Diocletian (who ruled from 284 to 305) enacted political reforms that made the city of Rome almost irrelevant. (This would have been unthinkable in earlier times.) Rome was stripped of its traditional role as the administrative capital of the Empire. The emperors began to rule from Milan or Ravenna, or from cities in Gaul.

By the time of Constantine I (who ruled from 306 to 337) every honest observer knew what was happening. It was at this time that Constantine decided to try something radical and new. His precise reasons to undertake this endeavor seem lost to history, but while we lack specific evidence on why he acted, we have abundant facts as to what he did.

As is very widely known, Constantine made Christianity the religion of Rome and established a second capital at Constantinople. This was a major reworking of the Empire.

Precisely why Constantine chose Christianity as the new religion of Rome (there were many others available) has long been debated. When critically examined from the standpoint of an amoral ruler, however, the answer becomes much clearer. So, it is to this question that we now turn our attention.

Almost no one in the early 4th century believed in the moral legitimacy of the Roman Empire. People might have feared the Empire, but they did not respect it. The Empire attempted what we might call publicity campaigns, but they didn't convince many people, and they certainly did not convince the Germanics, the Gauls and the Huns.

Once military force had failed, legitimacy was left at the core of Rome's problems. Fear can keep taxpayers in compliance, or faith can keep them in compliance, but with neither, they ignore you and keep their money at home. And with no money coming in, no government can survive. So, Constantine had to pursue legitimacy.

Rome could have restored their military power by dismantling their imperial structure, giving up the provinces and going back to the Republic as it was in 200 B.C., but this was certainly not something that the holders of central power were willing to consider. They would simply steal as much as they could and run away before they would go back to lives of personal virtue and productivity. So, this was out of the question. That left restoring legitimacy as their primary option, long-shot though it may have been. Whether anyone in Rome understood the question in these terms is both unknown and irrelevant; they dealt with this issue every day and tried to adapt and solve it continually.

Constantine came face to face with this problem in his mid-30s, following a long career in many areas of the Roman government, so he understood the problem quite well. The most pressing daily issue facing him was money. (Military expenditures at this time were 40% to 70% of the entire budget of the state.) He needed it to operate the empire from his central headquarters in Italy, and income simply was not coming in sufficiently. With it, he could pay off tribes of barbarians, hire soldiers and bring ever more free food and entertainments to Rome1. And since Rome was now centralized, money spent in any other way, such as within farming communities or within families, was of no use to the Empire at all. Only cash coming to the imperial treasury mattered. Somehow, he had to get the surplus of the people.

There was, of course, the option of cutting back expenses, but that was a problem, too. The people were kept in a manageable state by distracting them with expensive entertainments, and to eliminate these could be dangerous. Constantine wanted to scale back the (very expensive) public games and festivals and move toward austerity but, again, Rome was now akin to a socialist state, and the populace was dependent upon distractions and handouts.

In this seemingly impossible situation, Constantine found a way out: Christianity. This strategy provided him both easy money and legitimacy. It would not be easy to get an entire empire to change religions in a moment, of course, but this strategy provided what the empire needed and nothing else did.

So, Constantine embarked on his plan2. He and his two co-emperors ordered the end of Christian persecution in 311 – a year and a half before the Battle of the Milvian Bridge, where he was supposed to have had a conversion to Christianity. In this Edict of Toleration by Galerius, Constantine's co-emperor (Galerius) more or less admits that the persecution of Christians under Diocletion had failed.

The story of Constantine's conversion, of course, is that God promised him victory by the sign of the cross before the battle of Milvian Bridge on October 28, 312, after which he became the first Christian Emperor. The facts of his life, however, do not support this story.

As mentioned above, Constantine stopped Christian persecutions about eighteen months earlier. He also continued his personal devotions to Mars and especially to Apollo, also known as Sol Invictus. These are not acts that a Christian would take once, much less repeat them continually for decades. In addition, Constantine was as bloody as most other emperors. He broke a solemn oath and executed his brother-in-law, as well as other competitors. In 326, he ordered the execution of his oldest son, Crispus, who had not only been appointed Caesar3 and had served as consul, but had recently distinguished himself in a military campaign. In the same year, Constantine ordered the death of Fausta, the mother of three of his sons. So, any claim of Constantine's personal devotion to Christ must be rejected.

1There is a great deal to be said about the Roman entertainment culture and its effects upon the populace, but I think we shall have to forgo most of it.

2As mentioned earlier, I am aware of no written record of Constantine's thinking – even a questionable one – aside from the "conversion story," which we come to now.

3The office of Caesar was akin to being the emperor designate – set to be the next emperor.