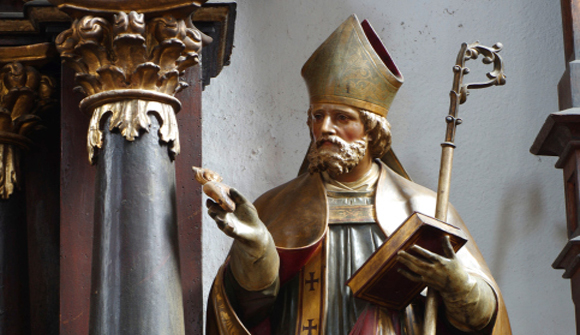 There's a reason why Hobbes and Rousseau are revered thinkers to this day: they saved the legitimacy of rulership as the Divine Right of Kings was failing. Performing the same job more than a thousand years earlier was a man named Augustine of Hippo. We'll examine.

Once Constantine had moved his capital to the east, the Western Empire was more or less left to its fate. Certainly there were titular emperors who wanted to restore the glory that had been Rome, but it was manifestly beyond saving. The barbarians grew stronger and stronger, and Rome weaker. Through most of these years, Rome was paying the barbarians hundreds of pounds of gold every year, in exchange for peace. The Western Empire had become a vassal state of the barbarians.

Into this mix comes the man we know as St. Augustine. Born in 354, he obtained an extensive education and by the time he was 29, he was operating one of the best schools in Rome. By his 30th birthday (in 384), he was appointed the professor of rhetoric for the imperial court at Milan. This was the most important academic appointment in the Latin world (that is, the western world, as opposed to the eastern, Greek world). This was also a very powerful political position.

Two years later, Augustine went back to his home in Northern Africa and became a monastic Christian. His conversion came about after studying Plato's work for years, plus the study of a famous ascetic saint who lived in the desert, completely cut off from civilization. Soon, Augustine was a renowned preacher and by about 396 he was a full bishop. Shortly thereafter, Augustine set out to remove the heresy of Donatism1 from his territory. At first he tried to convince the Donatists to join the approved church, but when that failed, he called for government force to repress them.

In 410, the city of Rome was taken by barbarians under the leadership of the Visigoth Alaric. As always, people sought someone to blame. Some said that their new Christian religion might be to blame for the disaster. The ruling class in particular complained that any religion that championed "turning the other cheek" and that held worldly empires in low esteem was dangerous.

In response to this, an imperial commissioner named Marcellinus, a friend of Augustine's, asked him to respond to the charges. Augustine quickly produced the first several chapters of his book, The City of God, which rather effectively quieted the complaints. (He continued the book over a number of years, until it was finally complete.)

It is important that Augustine was not merely a clergyman; by 419, he was personally acquainted with the emperors Honorius and Theodosius II, and was authorized by them to undertake the publicity of their edicts. It is also highly important that Augustine's teachings in City of God became the foundation of the Catholic Church's theology for approximately a thousand years, and are incredibly influential still. In short: Augustine created the theology of the Roman Catholic Church.

It is almost without question that Augustine is still considered the greatest theologian of the Church. But, to buttress the point, here are quotations from Pope Benedict XVI:

[Augustine is] the greatest Father of the Latin Church.

It could be said that all the roads of Latin Christian literature led to Hippo, the place in North Africa where he [Augustine] was Bishop from AD 395 until his death in 430.

And, this was the case very early as well. At the Second Council of Constantinople in 553, only three Latin authorities2 are quoted: Hilary, Ambrose, and Augustine.

Augustine's City of God presents human history as being a conflict between the City of Man and the City of God, which strongly parallel's Plato's ideas on the heavenly pattern and the ideal state.

Augustine is not shy about his regard for Plato. In City of God, he gushes over him:

Among the disciples of Socrates, Plato was the one who shone with a glory which far excelled that of the others, and who, not unjustly, eclipsed them all. By birth, an Athenian of honorable parentage, he far surpassed his fellow disciples in natural endowments, of which he was possessed in a wonderful degree. Yet, deeming himself and the Socratic discipline far from sufficient for bringing philosophy to perfection, he traveled as extensively as he was able, going to every place famed for the cultivation of any science of which he could make himself master.

Augustine sees Christianity as the ideal and perfect philosophy, but it is very clear that he hold's Plato's ideals in exceptionally high regard, saying: It is evident that none come nearer to us than the Platonists.

Roman Christianity, from Augustine's time onward, was a Platonic Christianity. This is evident not only from the doctrines, but from the art of the era, which was almost always unrealistic in its representations. This is the Platonic ideal in visual expression: The earthly form is but a shadow; it is only useful to the extent that it focuses the mind around the heavenly ideal. Thus, highly representational art would distract the mind from the high ideal to mere earthly beauty. Accordingly, realistic, representational art did not reappear until the 15th century3.

A NEW KIND OF EMPIRE

By the middle of the 5th Century (401-500 A.D.), the Church of Rome found itself in a unique position: Abandoned in the midst of a dying empire, with little and decreasing access to force, but in an excellent position of legitimacy. It is from this most unusual position that they began to build a most unusual form of empire.

The Church found itself with a monopoly on legitimacy. If they proclaimed something to be approved by Christ, a huge number of people would presume that the person or thing was deserving of honor, respect and support. They would act accordingly. And, if the Church condemned something, it would be condemned by their now-millions of followers. It was almost the sole provider of legitimacy in what had been the original Roman Empire.

In this situation, it became critically important for them to maintain this legitimacy. They developed dazzling ceremonies, dramatic fables, and inserted their images into the minds of westerners at every possible point and in ever-improving ways. They sought to become the center of reference for every human mind in Europe. Beyond all else, this imperative guided the rule of the Church. And it must be said that they succeeded astonishingly. The men and women of Europe referenced nearly all of their thoughts to the Church's opinion for a thousand years. Their odd empire was dramatically successful. They certainly proved that great masses of men can be very effectively controlled without weapons.

One of the most critical aspects of legitimacy, and one that is very little understood, is the ruler's need to be legitimate in his own eyes. (We will cover this in more detail in a later chapter.) Again here, the Church found comfort in Plato. One of Plato's more important teachings was that philosophers should rule over men, instead of soldiers and old-style kings. For example, he says:

Until philosophers are kings, or the kings and princes of this world have the spirit and power of philosophy, and political greatness and wisdom meet in one… cities will never have rest from their evils,– nor the human race, as I believe,–and only then will this our State have a possibility of life and behold the light of day.

And, the same sentiment in a more direct form:

Until philosophers bear rule, States and individuals will have no rest from evil.

The Church at Rome went about to rule as philosopher-kings. Beginning with very little military power – and unlikely to have much for some time – they worked long and hard on techniques of persuasion, guidance and manipulation.

Students of the Middle Ages have often commented on the oppressive nature of the Catholic Church upon the minds of men. This was often true, but it was not generally the goal of Church leaders to be cruel: it was to maintain power in conditions of limited force4. And the truth is that the greatest of all word-based motivations is the fear of shame.

For whatever reason, humans are grossly over-affected by shame and will cower before those who are able to impose it. It is very common that when people encounter the first possibility of shame, they instantly and almost unconsciously assess the likelihood of shame being brought upon them by each option in front of them. They move away from whatever might cause them shame, even before considering the merits of the individual options. In other words, we look ahead to see if shame will result from our options before we weigh the costs and benefits. Then, if shame will be possible, we reject the choice, no matter what its benefits may be. Shame is an unnaturally powerful tool of manipulation.

Accordingly, the Church became expert at applying shame and the fear of shame. It was necessary if they were to maintain the bizarrely difficult position of rulership without violence. This does not excuse their cruelty, but it goes a long way toward explaining it.

1The Donatists rejected any priesthood imposed upon them by the Emperor, especially priests that had denounced Christ during persecutions. Moreover, they considered the Emperor a usurper of Christianity.

2"Latin" authorities are those who wrote in the Latin language and came after the writers of the New Testament and the men of primitive Christianity, all of whom wrote in Greek.

3Gothic art, beginning a few centuries earlier, was a step in the direction of representational art.

4Again, it is a most unusual circumstance to build an empire without possessing a significant military advantage. To force people to obey at the end of a sword is one thing; to manipulate them into obedience with mere words is quite another, and requires much greater skill.