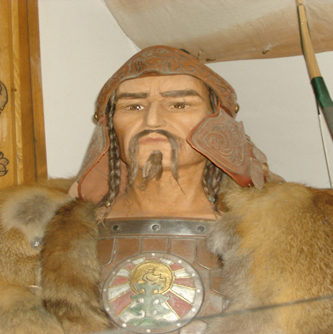 It takes more than raw power to run a successful state; people must believe that laying their wealth at your feet is a righteous thing to do. This week, we'll look at a big part of how this idea came to Europe.

The Church was not, however, willing to forgo military power. They knew its importance and wished to get it back. To do this, they would have to turn legitimacy into military power.

During the 5th century, military power continually withdrew from Europe. Constantinople, in what is now Turkey, was being established and the eastern Empire was doing fairly well, but power slipped away in the west till there was almost none left. By the time of Pope Leo I (440-461), he was left as the senior imperial civilian official in Rome.

The famous story of Pope Leo (and one that the Church spared no opportunity to exploit) was when he went out of the city of Rome to meet Attila the Hun in 452. The dramatic story begins as Attila wreaks havoc throughout Italy and ultimately arrives at the gates of Rome. Then Leo, with two other civil functionaries, goes out to meet Attila and somehow convinces him to go away. Since this was highly contradictory to Attila's character, the Church proclaimed it a miracle and published the legend of Leo the Great far and wide.

According to numerous sources, the basic facts of the story are true: Attila did come to Rome, Leo did go to see him, and Attila did leave. From this point on, however, the stories begin to differ. Leo's contemporary, Priscus, opines that a large sum of gold may have been involved, or that logistical concerns may have been the true reason for Attila's withdrawal. The Hun army had dramatically stretched their supply lines and were overflowing with plunder; so, the Pope's plea for mercy may have served as an honorable reason for withdrawal.

In any event, Leo was unable to prevent the Vandals from sacking Rome just three years later. But, this latter episode was forgotten. The Church championed their version of the first story because it was wonderful for their legitimacy. Miracles proved that they were associated with the great God and judge of all mankind. And the miracle of defeating the most fearsome violent army of the age was perfect for legitimizing the rule of philosophers above mere soldiers.

This event was also crucial in allowing Leo to promote the Papacy as the one true voice of Christianity. This theme, of the "universal jurisdiction of the Roman bishop," is found in many of his letters and even in the record of his orations, ninety-six of which still exist.

The Church at this time embarked on their first great campaign of expansion: Evangelism. By converting the pagan barbarians to Christianity, they didn't immediately gain military power, but they greatly expanded the range of their legitimacy. The map below shows the spread of Christianity during the early years of what we are calling a Platonic Empire.

Note that most of the great military powers of the era – in what are now France and Germany – became Christian Kingdoms and subject to the legitimacy of the Church. That did not mean that the Church could issue direct orders to the kings – they usually could not – but that the kings now had to consider the effect of the Church's opinions upon their people. As always, these rulers were dependent upon the surpluses of their subjects to pay for their military might. The Pope and the Church now mattered a great deal to them.

The Re-conquest of Europe

The next steps in the re-conquest of the west happen to be some of the more entertaining passages in history. They involve forged documents and massive donations of land (and its governance) to the Church.

The first donation was a fairly mundane affair called the Donation of Sutri. This was simply an agreement between Liutprand, King of the Lombards and Pope Gregory II in 728. At Sutri, the two reached an agreement by which the city and some hill towns were given to the Papacy, "as a gift to the blessed Apostles Peter and Paul." The pact was only important in that it became a precedent1 for the accumulation of Papal States.

The next episode, called the Donation of Constantine, is far more dramatic. In about 750, a letter was produced by the Church, supposedly written by Constantine I on his death bed. The Donation grants Pope Sylvester I and his successors, as inheritors of St. Peter, dominion over lands in Judea, Greece, Asia, Thrace, Africa, as well as the city of Rome, with Italy and the entire Western Roman Empire, while Constantine would retain imperial authority in the Eastern Roman Empire from his new imperial capital of Constantinople.

The text claims that the Donation was Constantine's gift to Sylvester for instructing him in the Christian faith, baptizing him and miraculously curing him of leprosy. It is unknown if any copy of this letter still exists and it is now universally considered a forgery, but it was accepted in its time. It was, again, a tool of legitimacy for the Church. They did not immediately try to collect all of the lands that Constantine "donated" to them, but they kept their legitimate right to those lands very much in the minds of the men and women of Europe.

The most dramatic story of "magic letters" occurred just a few years later in 754, when Pope Stephen II is reported to have received a letter from heaven, written in the hand of St. Peter, to the king of the franks, Pepin the Short.

Previously, Pope Stephen had traveled to Paris to anoint both Pepin and his sons as a new line of kings, thereby supplanting the old Merovingian royal line. Shortly thereafter, Pepin went to war with the Lombards who were taking Italy and heading toward Rome. After driving out the Lombards, Pepin apparently gave the Pope the lands which the Lombards had taken from the Byzantine Empire. Thus the Church was handed a sizable piece of the Italian peninsula – lands that would be called the Papal States, and which were the basis of the Papacy's secular power for a thousand years.

This purported letter – written in pure gold on the finest vellum – was widely considered legitimate during the Middle Ages. It is reported to have read as follows:

Wherefore, all those who, having heard my preaching, put it into practice, must believe absolutely that by God's order their sins are cleansed in this world and they shall enter stainless into everlasting life.

Come ye to the aid of the Roman people, which has been entrusted to me by God. And I, on the day of Judgment, shall prepare for you a splendid dwelling place in the Kingdom of God.

Peter, Prince of the Apostles.

Again, whether or not there ever was such a letter, people widely believed that there was. It was not the letter itself that was important to the Church, but the legitimacy that came from people believing that the Pope was a holy enough man for Peter to drop down from heaven and give him such a note – and, again, that the magic virtue of a philosopher-king could overcome the military force of an army like that of the Lombards.

Pepin confirmed his Donation of land to the Church in 756, and in 774 his son Charlemagne confirmed the donation of his father.

In 800 Pope Leo III crowned Charlemagne as a Roman Emperor. This was a major step in establishing what later became known as the Holy Roman Empire, and from that date onward the popes claimed the right to crown its emperor. This gave them a legitimacy above the kings of the earth – just the right position for an institution of philosopher-kings, whose rule would continue without a major interruption for another five and a half centuries.

1Again, this shows an odd, instinctive human weakness – that if something has been done before, it must be “okay.”