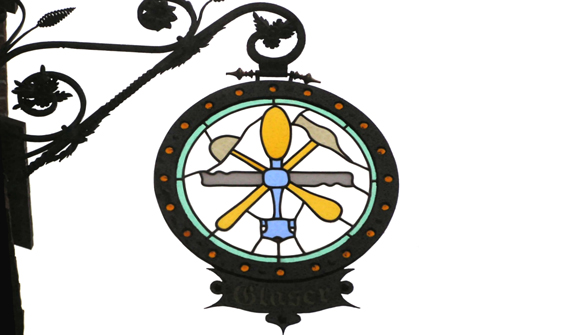 "The natural progress of things," Thomas Jefferson once wrote, "is for liberty to yield and for government to gain ground." Today we'll see how this process began in Europe, and one of the first steps in the evolution of European law.

Medieval guilds were exclusive organizations, created to preserve the rights and privileges of their members. The guild was self-created power. (Again, the Europeans seeing to things themselves.) The guild was separate and distinct from the civic governments, although wealthy guildsmen soon enough sought positions in city governments and blurred the lines.

Guilds were entirely city organizations. There was no place for a guild where specialization of labor didn't exist; they only arose where cities formed and specialists were required.

Merchant guilds were the first to appear, at around the year 1000. These were mutual protection societies for traveling merchants. In other words, these were traders who banded together and developed ways to protect themselves while traveling through Europe on business. They went so far as to found their own towns, as we will examine later in this chapter. This was the rebirth of trade, this time on a decentralized model.

Craft guilds followed the merchant guilds, and normally included people engaged in the same occupation, such as bakers, cobblers, stone masons and carpenters. Again, these were self-created organizations for mutual aid. And, again, as the guildsmen became wealthy (or, more usually, their children), they sought positions of municipal power. Once in position, the guild would soon use that power to forbid any non-members from practicing their trade. Local rulers were also eager to control the guilds, and laws were soon passed that forced all guild members to takes oaths of loyalty.

This process is one that is seen over and over:

Soon enough, the purpose of the guilds became to maintain a monopoly of a particular craft – but some more so, some less. Manufacturing guilds, for example, tended to establish reputations for quality rather than restricting competitors. These people wanted to expand their sales and needed to convince people in distant places to buy their products. They wanted more people involved. Victualling guilds, on the other hand – the groups that sold foods – were big on restraining trade. People didn't need to be convinced to buy their products, since biology did that for them – their customers became hungry every day, no matter what. So, with no need to convince people to buy, they went about to forcibly restrain trade and to raise their prices as high as they could.

There was usually a strong religious aspect to guild membership. This functioned as a way of enforcing the good behavior of the guild members; it may also have acted as a hedge against local officials and their power: I am connected to the Church; don't mess with me.

As the guilds failed after the Reformation, many turned to governments, asking them to enforce monopolies on manufacturing1 or trade and to force members to pay back obligations. Where governments provided such force, the guilds hung on. In the absence of force, they did not.

THE SOVEREIGNTY OF LAW

It is established by authority of the divine law that the prince is subject to the law and to justice. – John of Salisbury

Since the rulers at this time had a minimum of direct legitimacy (the Church seizing as much as was possible) the previously mentioned John of Salisbury faced relatively few difficulties when he published his book Policraticus, which was highly critical of them. (And from which the quote above is taken.) John proposed that the prince should be subject to law. The Church, conveniently, supported this idea, primarily because they always wanted to keep the princes under control. As mentioned previously, this was not easy to do, since they had very limited force to use. And, since divinity was included in John's formulation, the Church signed on and the idea stuck.

During the Classical era, the citizen was considered the seat of sovereignty. As Western society evolved, however, sovereignty slowly accrued to "the law," instead of to the people or to the rulers. The ruler was legitimated by upholding law. The ruler was considered illegitimate if he failed to uphold law. Over time, the Sovereignty of Law became the code of Western civilization.

But this did not spring into place in a moment, even after John's formulation was published in about 1159. It spread slowly and in different forms in the various parts of the West, but especially as the common law of England.

Before we cover two of the more important developments in law, it is very important to understand that what people in modern times think of as "law" is actually a very recent development. Hundreds of years ago – when the Rule of Law began – "law" meant something very different.

Here is a passage from Bruno Leoni's Freedom and The Law that provides some historical perspective:

The Roman jurist was a sort of scientist: the objects of his research were the solutions to cases that citizens submitted to him for study, just as industrialists might submit to a physicist or to an engineer a technical problem concerning their plants or their production. Hence, private Roman law was something to be described or discovered, not something to be enacted… Nobody enacted that law; nobody could change it by any exercise of his personal will.

The critical distinction to make is that "law" and "legislation" are not the same thing, or at least were not.

Properly, law was a process of determining whether actions were just or unjust. In practical terms, laws were the findings of judges. They were not edicts and commands; they were opinions, and were valuable because they explained justice and its reasonable application. A judge was called a Justice for good cause – he discovered, defined and explained justice to all men.

Legislation, in old times, were merely collections of laws (legal findings), put together into one group for convenience. It was only much later that legislation became a type of edict. (We will cover this further in a forthcoming chapter.)

So, in understanding the creation of the Rule of Law, we should not think of legislation; that came much later and greatly confuses the issue. "The rule of law" was certainly not "the rule of legislation."

1Though seldom noted, it is important to remember that monopolies associated with the state function only with violence backing them: Anyone attempting to enter the same business as the approved monopoly will be forcibly punished, either by being jailed or by having their goods confiscated.