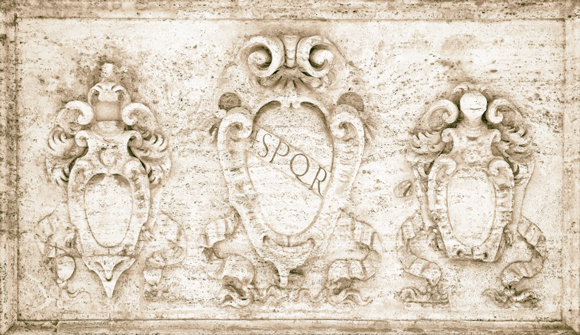 As many have pointed out, a democracy and a republic are very different things. Today we'll explain the beginnings of the great republic of history, Rome. You should bear in mind, however, that Rome's Republic and Rome's Empire were two very different things, comprising two separate eras.

Rome deviates from the cultural pattern we have been examining in that their creativity was not home grown and they did not simply overrun nearby creative peoples. Instead, they gathered to themselves the good ideas of distant peoples and made use of them, without trying to subjugate the creators. This may sound contrary, since Rome is known as a conquering state, but it should be stated, on Rome's behalf, that they didn't originally go about to conquer everything in sight, as Alexander had when he ruled Greece. There were simply competitors who would have gladly conquered Rome if they could. So, Rome conquered them first. Naked acquisition was an issue late, but not early.

Rome began, as best archaeologists can determine, in the 8th century B.C., comprised of people in two fortified settlements and another in the nearby woods. One settlement was on Palatine Hill (called Rumi) and the other on Quirinal Hill (called Titientes). The people in the woods were called the Luceres. These were three of numerous Italic-speaking communities that had formed in Latium, a plain on the Italian peninsula, by the 1st millennium B.C. The origins of these people is not known, but their Indo-European languages migrated from the east in the years between 1500 B.C. and 1000 B.C.1

The group that most affected the early Romans was the Etruscans, who lived north of Rome in Etruria (modern Tuscany and northern Lazio). Their influence is shown by the Roman list of kings (largely mythical), in which some names were Etruscan. The gladiatorial displays that we think of as Roman actually evolved out of Etruscan funeral customs. The Romans learned to build temples from the Etruscans, and they may also have introduced the worship of a triad of gods, Juno, Minerva and Jupiter, taken from the Etruscan gods, Uni, Menerva and Tinia. Religion was a form of cult, hallowed by tradition, centered on rituals carried out in the right way at the right time. At its heart was sacrifice (which meant, literally, "making sacred"). With luck, the god you honored with valuable goods (your sacrifices) would then answer your prayers, the most common of which were to be safe, prosperous, fertile and healthy.

When Romans found new gods in new cultures, they assimilated them, if at all possible, into their pantheon. Minucius Felix, in the 3rd century A.D. says, All nations have their own gods, but Rome welcomes the lot. Felix attributed Rome's success to this. Again, Rome would rather absorb than conquer.

The question of where the Etruscans came from has intrigued archaeologists for some time. The Greek historian Herodotus says that the Etruscans emigrated from Lydia, a region in western Turkey. Recent genetic studies2 point to the conclusion that Etruscan culture was imported to Italy from somewhere in the Near East. Etruscan settlements were frequently built on a very steep hill and surrounded by thick walls, arguing for organizing principles that were informed by the great Catastrophe of 1200 B.C., which, presumably, they fled.

After about 650 B.C., the Etruscans expanded into north-central Italy. Expanding also to the south, the Etruscans came into direct contact with the Greeks. After initial success in conflicts with Greek colonists in southern Italy, Etruria went into a decline. Taking advantage of this, Rome rebelled and gained independence from the Etruscans in approximately 500 B.C. It also abandoned its monarchy and replaced it with a republican system.

The republic was a scalable form of democracy that had been tried in a few Greek cities previously. A democracy worked well for a single city where the participants (which included only a fraction of the entire populace) were all conscious of the effects of their actions and would expect to feel them. A republic, however, added a layer of representatives, moving the citizens one step further away from the actual use of power. This was the birth of the politician. Under city-state democracy, those who could vote did so directly; they decided and the decision was implemented. The republic, however, required a new layer of professional decision-makers. Those who could vote now elected a politician to do their bidding; they, themselves, were removed from the process.

A republican structure allowed a democratic style of government to expand beyond the level of a single city. In other words, democracy worked well enough for a city-state, but beyond that point, another layer was required. This form is called a republic, and this was the form of governance that Rome chose.

The Roman Republic, though highly complex, was based on a Senate, composed of the nobles of the city, along with popular assemblies which ensured political participation for most of the freeborn men and elected magistrates annually. The structure of the operation is shown below.

After 500 BC, Rome joined with other Latin cities to defend themselves from the nearby Sabines. Then, over the next hundred years (by 394 B.C.), Rome incrementally expanded over the entire area of Latium.

In 387 B.C., however, Rome was suddenly sacked and burned by a group from eastern Italy, called the Senones. The Senones had also successfully invaded Etruria. After this, Rome hastily rebuilt and went on the offensive, conquering the Etruscans and seizing territory from the Gauls in the north. By 290 BC, Rome controlled over half of the Italian peninsula and soon brought the Greek colonies in the south under its control as well.

At this time, the core ideals of Rome had been in place for some time, but there were as yet none of the impressive buildings and monuments that we usually associate with Rome. The great monuments were produced later, under the Empire, and only once they could be financed by the movements of the people's surplus to the Emperor's storehouses.

By the 1st century B.C. (beginning 100 B.C.) serious internal problems threatened the existence of the Republic. The Social War (between Rome and its allies) and the Servile Wars (slave uprisings), were very expensive conflicts, all within Italy, and forced the Romans to change their policy with regard to their allies and subjects. By then Rome had become an extensive power, with great wealth taken from conquered peoples (as tribute, food or slaves). But, Rome's allies were unhappy. After all, they had fought side by side with the Romans, yet they were not citizens and shared little in the rewards. So, to keep peace, by the beginning of the first century A.D. practically all of the free inhabitants of Italy were made Roman citizens.

Between the massive expansion of Roman power and a massive increase in the numbers and types of people who could now vote, multiple new problems shook the old political system of the Republic. In January of 49 B.C., following numerous crises, Julius Caesar marched his legions against Rome. Within a few years he had defeated all his opponents, and then ruled Rome for four years. After his subsequent assassination in 44 B.C., the Senate tried to reestablish the Republic, but its champions, Marcus Junius Brutus and Gaius Cassius Longinus, were defeated by Caesar's lieutenant Mark Antony and Caesar's nephew, Octavian. After a long struggle, a final naval battle took place on September 2nd, 31 B.C. Octavian (soon to be called Augustus) was victorious, and became the sole ruler of Rome and its empire. On that day, the Republic ended and the Principate, the first phase of the Roman Empire, began.

1Languages can be very effectively traced by specialists, and provide an excellent tool for tracking the movements of peoples. Since the people who became Romans came from the east in the time-frame of 1500-1000 B.C., it is quite likely that they fled the Catastrophe of 1200 B.C., then settled in Latium.