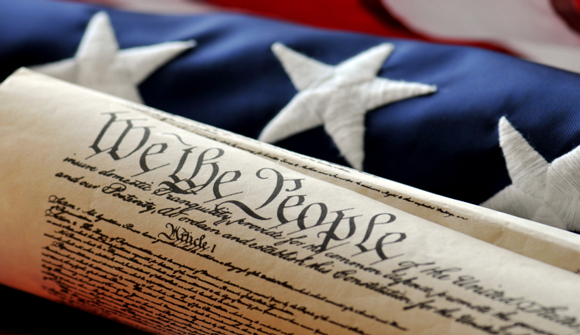 EDITORIAL
A Declaration of Independence from Big Government
By Richard Ebeling - July 07, 2015

Many forms of personal liberty are under attack today, from economic regulations that hinder people from their peaceful pursuits of earning a living and improving the material conditions of life to an increasingly intrusive surveillance state that seems to follow every step we make and every breath we take.

Equally disturbing is the extent to which too many Americans have become desensitized and indifferent to this growth in the size and scope of government. Around this Fourth of July time of the year, after the hotdogs and burgers have been grilled and eaten and the evening firework displays have been enjoyed, it is worth remembering the meaning and significance of this holiday.

The Right to Life, Liberty and the Pursuit of Happiness

The Declaration of Independence, proclaimed by members of the Continental Congress on July 4, 1776, is the founding document of the American experiment in free government. What is too often forgotten is that what the Founding Fathers argued against in the Declaration was the heavy and intrusive hand of big government.

We hold these truths to be self-evident, that all men are created equal, that they are endowed by their Creator with certain unalienable Rights, that among these are Life, Liberty, and the Pursuit of Happiness – That to secure these rights, Governments are instituted among Men, deriving their just powers from the consent of the governed – That whenever any Form of Government becomes destructive of these ends, it is the Right of the People to alter or abolish it, and to institute new Government, laying its foundation on such principles and organizing its powers in such form, as to them shall seem most likely to effect their Safety and Happiness.

Grievances Against the Crown's Economic Controls

Concentrating Power in the Hands of Government

In addition, the authors of the Declaration stated, the king fostered civil unrest by creating tensions and conflicts among the different ethnic groups in his colonial domain (the English settlers and the Native American Indian tribes).

Governmental Controls at Every Turn

The 1760s and early 1770s saw a series of royal taxes that burdened the American colonists and aroused their ire: the Sugar Act of 1764, the Stamp Act of 1765, the Townsend Acts of 1767, the Tea Act of 1773 (which resulted in the Boston Tea Party) and a wide variety of other fiscal impositions.

The American colonists often were extremely creative at avoiding and evading the Crown's regulations and taxes through smuggling and bribery. (Paul Revere smuggled Boston pewter into the West Indies in exchange for contraband molasses.)

Defending Freedom as the Last Resort Against Tyranny

In every stage of these Oppressions We have Petitioned for Redress in the most humble terms: Our repeated Petitions have been answered only by repeated injury. A Prince whose character is thus marked by every act which may define a Tyrant, is unfit to be the ruler of a free people.

Never before in history had a people declared and then established a government based on the principles of the individual's right to his life, liberty and property. Never before was a society founded on the ideal of economic freedom, under which free men may peacefully produce and exchange with each other on the terms they find mutually beneficial without the stranglehold of regulating and planning government.

It is worth remembering, therefore, that what we celebrate every July 4 is the idea and the ideal of each human being's right to his life and liberty, and his freedom to pursue happiness in his own way, without paternalistic and plundering government getting in his way.

Dr. Richard Ebeling is the BB&T Distinguished Professor of Ethics and Free Enterprise Leadership at The Citadel in Charleston, South Carolina. He was professor of economics at Northwood University in Midland, Michigan (2009-2014). He served as president of the Foundation for Economic Education (2003-2008) and held the Ludwig von Mises Chair in Economics at Hillsdale College in Hillsdale, Michigan (1988-2003).