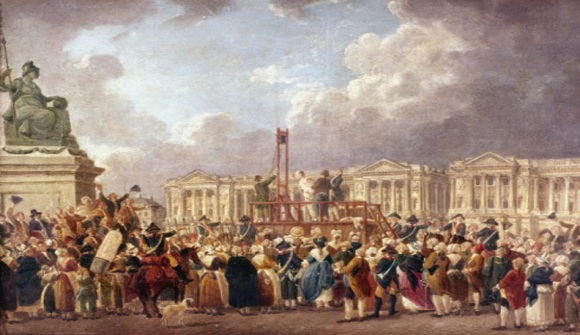 October 25th marked the 247th birthday of one of the greatest voices of liberty, the French political philosopher of freedom, Benjamin Constant. He may not be a household name to friends of freedom today, but he should be. He wrote one of the most principled and consistent defenses of individual liberty and freedom of enterprise to appear in the last two hundred years, the Principles of Politics Applied to All Governments (1815).

Benjamin Constant was born on October 25, 1767. He had an unusual childhood being brought up by tutors who introduced him at an early age to gambling dens and "houses of ill-repute." He had a long and tempestuous relationship with one of the leading French female voices of classical liberalism, Madame de Stahl, for whose affection he more than once threatened suicide.

But intellectually, he was a very public outspoken critic of the violence and tyranny of the "reign of terror" during the French Revolution, and a sharp-tongued opponent of Napoleon Bonaparte, especially in his 1814 essay, "The Spirit of Conquest and Usurpation."

Constant also served as a deputy in the French Parliament and led a group of classical liberal members in opposing much that the government attempted to impose on the society. Benjamin Constant died on December 8, 1830.

But his masterwork was Principles of Politics, written in the immediate aftermath of Napoleon's rule over France and much of Europe. It is a defense of all forms of freedom against despotism. Constant considered natural rights to be a superior foundation for liberty than Jeremy Bentham's utilitarianism. "Right is a principle; utility is only a result," Constant said. "Say to a man: you have the right not to be put to death or arbitrarily plundered. You will give him quite another feeling of security and protection than you will by telling him: it is not useful for you to be put to death or arbitrarily plundered."

Yet, in fact, Constant's arguments for freedom and limitations on government are both rights-based and utilitarian, or consequentialist. He asks us to think not only of the inherent rightness of freedom, but also of its positive effects and the harm from its abridgment. It is not possible to summarize and do justice to all of his analysis. But some of his themes can at least be touched on.

Dangers from Arbitrary and Controlling Government

He warned of the "proliferation of laws" that go far beyond the protection of life, liberty, and property. This proliferation generates disrespect, avoidance, and corruption, which undermine the legitimacy of and obedience to all law, including those meant to secure freedom. Similarly, Constant warned of laws passed to prevent potential crimes, which can lead to arbitrary arrest, imprisonment without due process of law, and brutal treatment simply because some bureaucratic enforcer might conjure up suspicions in his own mind.

This led Constant to point out the dangers from all government restrictions on freedom of speech, written expression, and religion. Censorship creates a society of hypocrites who utter what the government wants, while their minds harbor different thoughts and beliefs. Furthermore, the very ideas that the government wishes to repress become the focal point of underground fascination for those wanting to read the forbidden words.

The government's banning of some religious faiths, while sponsoring or subsidizing others, results in a growing number of people revolting against all religious belief under the compulsion of having to give allegiance to a theology not of their own choosing. Thus, it can throw all religion into disrepute—the opposite of what the proponents of a state-sponsored faith want to achieve.

What is required is establishment of an impartial rule of law. This means an independent judiciary, due process for all, and elimination of cruel and unusual punishments. Constant also emphasized the need for securing and protecting private property rights, which not only guarantee freedom, but also foster a peace of mind that enables a spirit of savings and investment, and supports a society of voluntary, mutual consent in all human associations.

The Delusions and Damages from Government Regulation

Inconsistent, therefore, with protecting private property and freedom of individual decision-making are all privileges, protections, and subsidies that benefit some at the expense of others. Central to Constant's criticism of all government interventionism is his awareness that no regulator has the wisdom, ability, or disinterestedness to succeed at it.

"How will the government judge, for each province, at a huge distance, and remote from others, circumstances which can change before knowledge of them get to it?" he asked. "How will it stop fraud by its agents? How will it guard itself against the danger of taking momentary blockage for a real dearth, or a local difficulty for a universal disaster? . . . The men most lively in recommending this versatile legislation do not know how to go about it when it comes to the means of carrying it out."

Constant also pointed out that such interventions in the market "create artificial crimes [that] encourage the committing of these crimes by the profit which they attach to the fraud which is successful in deceiving them." It also corrupts the whole political process and undermines the spirit of enterprise and the desire for freedom.

"In a country where government hands out assistance and compensation, many hopes are awakened," Constant warned. "Until such time as they have been disappointed, men are bound to be unhappy with a system which replaces favoritism only by freedom. Freedom creates, so to speak, a negative good, although a gradual and general one. Favoritism brings positive, immediate, personal advantages. Selfishness and short-term views will always be against freedom and for favoritism."

Foreign Wars and Loss of Freedom

Constant was also fearful of war, and the rationales for it, as a threat to freedom. In the wake of revolutionary France's wars of "liberation" throughout Europe, he explained that such foreign interventionism undermines the very cause for which it is undertaken.

"To give a people freedom in spite of itself is only to give it slavery. Conquered nations can contract neither free spirits nor habits. Every society must repossess for itself rights that have been invaded, if it is worthy of owning them. Masters cannot impose freedom."

"For nations that enjoy political freedom," Benjamin Constant continued, "conquests have furthermore, beyond anything else we might hypothesize, this most clearly insane feature, that if these nations stay faithful to their principles, their triumphs cannot help but lead to their depriving themselves of a portion of their rights in order to communicate them to the conquered."

Liberty for the Ancients vs. the Moderns

Finally, attention should be drawn to one of Constant's most famous and important pieces, a lecture delivered in Paris in 1819 devoted to "The Liberty of the Ancients Compared with that of the Moderns." He drew his audience's attention to the fact that in the world of ancient Greece:

"The aim of the ancients was the sharing of [political] power among the citizens of the fatherland: this is what they called liberty. [But] the citizen, almost always sovereign in public affairs, was a slave in all his private relations.

"As a citizen, he decided peace and war, as a private individual, he was constrained, watched and repressed in all his movements; as a member of the collective body, he interrogated, dismissed, condemned, beggared, exiled, or sentenced to death his magistrates and superiors; as a subject of the collective body he could be deprived of his status, stripped of his privileges, banished, put to death, by the discretionary will of the whole to which he belonged . . .

"The ancients, as Condorcet says, had no notion of individual rights. Men were, so to speak, merely machines, whose gears and cog-wheels were regulated by the law . . . The individual was in some way lost in the nation, the citizen in the city."

Constant then asked his listeners to compare this ancient notion of the meaning of liberty with that of his own "modern" time in the early decades of the 19th century,

" . . . what an Englishman, a Frenchman, and a citizen of the United States of America understand today by the word 'liberty.' For each of them it is the right to be subjected to the laws, and to be neither wrested, detained, put to death or maltreated in any way by the arbitrary will of one or more individuals.

"It is the right of everyone to express their opinion, choose a profession and practice it, to dispose of property, and even to abuse it; to come and go without permission, and without having to account for their motives or undertakings. It is everyone's right to associate with other individuals, either to discuss their interests, or to profess the religion which they and their associates prefer, or even simply to occupy their days or hours in a way which is most compatible with their inclinations and whims."

For the moderns, Constant said, liberty consisted of "peaceful pleasures and private independence." Modern men wished, Constant explained, "each to enjoy our own rights, each to develop our own faculties as we like best, without harming anyone . . . Individual liberty, I repeat, is the true modern liberty."

In the ancient world, the personal and the private were subordinate and subjugated to the political. Each individual's life revolved around and was defined by his relationship to and – and standing within – the political order. But in Benjamin Constant's "modern world" of the early 19th century, the political order was relegated to an increasingly unimportant corner of social life. The individual was liberated from political subordination, and he attached himself to an expanding web of voluntary relationships of diverse and personal interest.

Returning to the Collectivism of the Ancients

The tragedy of our own time, two hundred years after Benjamin Constant delivered his lecture on, "The Liberty of the Ancients Compared with that of the Moderns," is that our "post-modern" era has been slowly but surely returning to the false conception of freedom as understood and practiced by the "ancients."

The "collective" has become increasingly everything, and the individual almost nothing. With a diminished or, indeed, nearly non-existent belief in or understanding of the "natural rights" of the individual human being to his life, liberty and honestly acquired property, he is a sacrificial slave to the presumed interests of the social and political group of which he is declared to be an inseparable and inescapable part.

The individual's spoken and written words can be curtailed; his freedom of movement is constrained by government border controls and prohibitions; his choice of work, occupation and profession is regulated and restricted by bureaucracies serving special interest groups as well as their own narrow purposes; his earned income and accumulated wealth is politically redistributed by politicians buying votes and enhancing their own power; and his personal safety is made precarious due to the uncertainties resulting from foreign interventions and wars that drag him and his society into conflicts in faraway countries in the names of "national interest," "nation-building" in other places, and altruistic global "social welfare" adventures.

We need the wisdom and principled defense of individual rights and liberty that Benjamin Constant displayed in his writings and lectures, without which we may easily continue down the road that leads even more to the collectivism of the ancients of three thousand years ago.