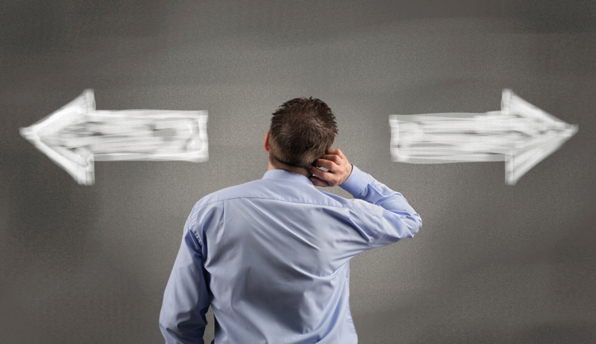 We live in a time when virtually all political parties and candidates stand for the same fundamental ideological idea: state interventionism and compulsory redistribution. This also applies to the mainstream media. Even many who say they adhere to a "pro-market" view of things in fact turn out to be only more "moderate" advocates of government regulations and welfare-state programs.

This is why political labels have become increasingly meaningless. Back in the 1950s and 1960s it was a common practice in political discussions to refer to people on "the left" as socialists or communists, and to call those on "the right" fascists or Nazis.

The False Distinction Between "Left" and "Right"

American liberals were considered "left-wingers" who were for bigger government and sympathetic to socialism, while conservatives were viewed as "right-wingers" who were "pro-big business" and against the "little guy" and therefore closet fascists.

These distinctions were misplaced and irrelevant because in the reality of twentieth century history both "left-wingers" and "right-wingers" were merely two variations on the same collectivist theme. Both were devoted to government control of social and economic life, with only minor institutional differences between them.

In addition, Marxists spoke of an international workers' revolution in comparison to fascists and Nazis who talked about nationalist and racial wars. Both socialists and fascists therefore believed that the world was divided into collective groups – social classes, nations, or races – that were inherently and inescapably in conflict with each other. The individual was denied meaning and existence outside of the tribe or social herd.

In our own times, Mussolini- and Hitler-type fascism is long a thing of the past and Soviet-style socialism is now gone as well.

What we are left with in American politics are those who call themselves "liberals" (or "progressives") and "conservatives," and who claim to be ideologically very far apart from each other. But are they really so far apart?

On "the left," the liberals say they are for civil liberties and personal freedom, but they continue to advocate ever more government regulation of business, redistribution of wealth and various forms of social engineering to manipulate human relationships and attitudes.

They never explain how personal freedom can be maintained and civil liberties secured if the government imposes a thought police to enforce "politically correct" conduct and language, or if society is divided into racial, ethnic and gender groups, each to be assigned by political power certain "affirmative" favors and privileges at the expense of others.

Nor can individual freedom be guaranteed when government taxes away the wealth of some to redistribute to others deemed more deserving because of ideological influence or political clout. Likewise, liberty has little meaning when government can seize people's property, regulate their business and industry, and interfere with the peaceful and voluntary exchanges that free men and women agree to for their mutual betterment.

"The left" in America still does not get it: freedom is an empty word if private property is not respected and if all human relationships are not based on personal consent.

On "the right" in America many conservatives still use the rhetoric of individual freedom and free enterprise, but beneath the surface it is clear that too often this is mere form without content. Many mainstream conservatives have given up all interest and willingness to oppose and abolish the interventionist-welfare state.

They have made their own peace with Big Government. They believe that the wider American public cannot be weaned from political paternalism; so they have set themselves the more "modest" goal of getting control of the political machinery in order, supposedly, to manage the welfare state more "cost-efficiently" and to use it to direct society in "better" and more "virtuous" directions.

Some fifty years ago conservatives used to tell their opponents on the left: "You cannot legislate morality." Better conduct could only come, they would say, through improvements in the individual human hearts of men and women, and through the peaceful possibilities of voluntary association.

Rarely is this heard anymore on the conservative "right." Instead, too many conservatives wish to use the government to socially engineer their fellow Americans in only a different form than their opponents on the left. Conservatives merely vie over control of school boards and educational curricula to see that public – government – school imposes a mindset on the youth of America different than the one the "progressives" would like to successfully implement.

No "Moral Compass" Through Coercion

These conservatives have apparently forgotten that no moral compass, virtuous conduct, or proper sense of community can be fostered through political propaganda or government-school indoctrination. The sources for these virtues are family and friends, and most importantly a moral philosophy of individualism and individual rights, out of which truly ethical conduct can emerge. It only can fully flourish outside of the political process.

In addition, far too many American conservatives see nothing wrong with government interventions, subsidies and regulations as long as they serve their personal business and income interests. Trade restrictions on foreign competition, regulations limiting domestic rivals, tax benefits to assure greater than market-based profits, and lucrative government contracts are all viewed as "the American way" by segments of the conservative political establishment.

Thus, in contemporary America the supposedly liberal "left" and the conservative "right" are really, for the most part, still two variations on the collectivist theme. Both wish to use the power of government to manipulate the social and economic environment.

They differ in their conception of the politically manufactured world they would like to see created, but both of these wings of collectivism share the determination to use government coercion to produce the outcomes they desire.

What the Friend of Freedom Advocates

The true friends of freedom are neither "left" nor "right." Classical liberals and libertarians reject the morality or the ability of politics to either recast human nature or to forcibly create a presumed "better world."

The classical liberal considers the highest political good to be the freedom of the individual. The function of government in a free society is to secure everyone from the predatory conduct of others. The purpose of law and the police is to see that everyone is protected in their life, liberty and honestly acquired property.

The cornerstone of the ethical society is that human relationships should be based on consent and mutual agreement. The free market is the natural arena of liberty, in which all associations are the result of free choice and no one may be forced into being the tool of another person's purpose.

Society is not some giant chessboard, to use a metaphor of Adam Smith's, on which the social engineer moves us about to suit his political pleasure. Rather, the civil society of free men is one in which we form patterns of association with one another as we find them good, desirable and beneficial.

The great political dichotomy, therefore, is between those who advocate force (often and perversely in the name of "good intentions" and "noble causes") and those who value freedom (for the flowering of the individual and the fostering of a just and prosperous society).

For this reason, the cause of liberty continues to transcend the erroneous distinction between "left" and right."