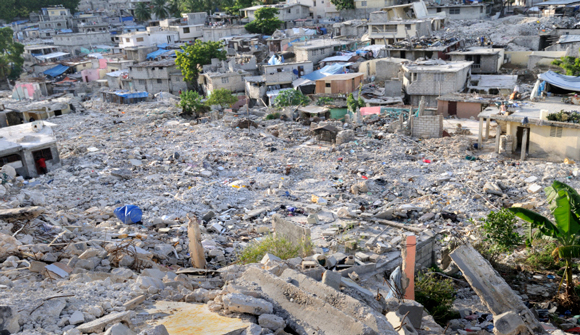 Our televisions screens have been full of those tragic pictures of the devastation and human hardship that has been caused by the earthquake in Caribbean country of Haiti.

Governments and private relief agencies are mustering their efforts to bring assistance to the survivors of this natural disaster, which may result in a death toll of possibly up to 100,000 people, according to some initial statements coming out of that country.

Private charitable agencies have historically shown themselves to have a greater degree of flexibility, creativity, and adaptability to handle these types of emergencies than governments in the context of the conditions in the affected area.

But besides that, governments – however well intentioned and helpful their relief aid may be for victims of these disasters – often start thinking "bigger thoughts" about the need and desirability of a more permanent political helping hand in the nation affected.

Such voices are already appearing in the form of former president Bill Clinton, who is now serving as the U.N. special envoy to Haiti. On the January 14, opinion page of The Washington Post, Clinton writes about "What We Can Do to Help Haiti, Now and Beyond." He calls for a join effort by "governments, businesses and private citizens" to rebuild and move Haiti on to a path of future economic growth and prosperity.

We have been reminded that Haiti is the poorest nation in the Western Hemisphere. At a time when many countries in the less underdeveloped areas of the globe have been rising out of poverty over the last several decades, Haiti, however, is one of those countries that has continued to stagnate with a 50 percent rate of unemployment of the work force and with 80 percent of the population estimated to be living below the poverty line before the earthquake. At a time when more and more countries are becoming industrialized and economically more diversified, over 65 percent of the people in Haiti still depend upon low productivity farming for their meager standard of living.

The government, not just for decades but also for more than two centuries, has been notoriously corrupt, brutal and tyrannical. If there is any instance of Frederic Bastiat's notion of "legalized plunder," under which the powers of government are applied to steal their wealth of some for the benefit of others who are politically well connected, it is Haiti throughout its sad history.

Billions of taxpayers' dollars from the U.S. and many other countries have all gone down a huge government rat hole that has lined the pockets of the rulers and their political cronies in Haiti. And, now, President Obama has announced that U.S. taxpayers will send an additional $100 million to Haiti over the coming months and years. Unfortunately, there has been no lasting benefit and sustained improvement in the wretched conditions of the Haitian people from all this politically redistributed largess.

For its long-term improvement, Haiti needs what Adam Smith, in his Inquiry into the Nature and Causes of the Wealth of Nations, called a "System of Natural Liberty":

1. Secure and defined private property rights for all citizens that are recognized and enforced by the police and the legal system.

2. Secure and respected civil liberties that include freedom of speech, the press, and association, with freedom of association including the right of each individual to open and operate businesses, and peacefully compete in any type of enterprise without restrictive government regulation, licensing, or controls.

3. Government activities greatly limited to those basic but essential functions of recognizing and protecting the right of each individual to his life, liberty, and honestly acquired property. This includes a system of impartial rule of law with no political favors or privileges for some at the expense and disadvantage of others.

4. Low, transparent, and predictable taxes to fund those limited governmental activities, with no fiscal bias detrimental to savings, investment, and capital formation, which are necessary ingredients for sustainable rising standards of living in the future.

5. A stable and non-inflationary monetary system.

6. Freedom of trade, with no tariffs, quotas or other regulatory restrictions on imports and exports. There also needs to be a positive attitude toward market-based foreign investments in the Haitian economy.

7. No politics of envy against "business" and the entrepreneurially successful, since it is private enterprise and creative and risk-taking businessmen in any society who are the "human engines" for growth, innovation, and competitive coordination of the economy.

While these policies can be strongly recommended to the Haitian people and those in the government of Haiti, the fact is that these are reforms that must be understood, desired, and finally implemented by the Haitians themselves. They cannot be successfully imposed on that unfortunate country by any enlightened elite in the United States or from anywhere else.

All real and lasting change has to come from within individuals, themselves, and through them for their nation as a whole.

What the Haitian people do not need and will not be helped by are people inside or outside government in other parts of the world recommending and reinforcing all the attitudes, ideas, and policies that have only succeeded in maintaining the poverty of Haiti.

In international affairs, politicians and diplomats are always talking about not sending "wrong signals" to other nations and governments in the give and take of global relationships. Proposals such as former President Clinton's represent just such wrong signals to a people who do need whatever individual and voluntary associative benevolent generosity might be mustered at the time of a great human tragedy.

The people of Haiti need some "right signals" about how out of this disaster a real recovery is possible that can lay the foundation stones for a new and prosperous Haitian economy. But those signals must not be policy ideas of more of the same failed government interventions, controls, or coerced redistributions either among the Haitian people or from the rest of the world to Haiti.

What the people of Haiti need are the individual liberty and secure property rights in an open, free market that can draw upon the creative potentials of the people themselves. No bureaucrats or politicians in either Washington, D.C. or in the Haitian capital of Port-au-Prince possess a fraction of the knowledge about what needs to be done – how, where or when, and for whom – that is known by the 10 million Haitian people, themselves.

Yes, they can use all the assistance that any and all men of good will may choose to provide right now, but the recovery that can begin "tomorrow" can only come about by releasing the creative energy and abilities of the Haitian people. And that means that their government and other governments need to get out of the way and not make a market-based recovery process more difficult than it has to be.