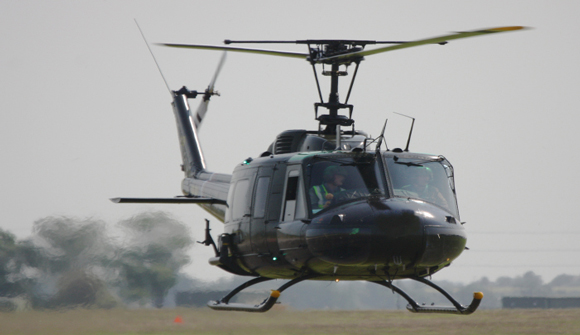 EDITORIAL
Are We Ready for the Fall of Baghdad?
By Ron Holland - October 24, 2014

I recently was in Vietnam and spent some time in prosperous, capitalist Saigon, now called Ho Chi Minh City, and toured the American War Museum. I believe there are a number of parallels between the Vietnam and Iraq War and that history could repeat itself now in Baghdad. Who can forget the former Vietnamese supporters of America being left behind as the last helicopter left the roof of the US embassy?

Today, America still has the strongest military in the world but our manufacturing capacity and financial situation shows the US is on a downhill slide like earlier over-extended and bankrupt empires throughout world history.

We've already watched the frightening incompetence of the Obama Administration and the CDC in dealing with the Ebola virus. One would have to be blind not to see the petrodollar deathwatch as Russia, China and the BRIC countries build new trading alternatives to avoid using the dollar world reserve currency when trading energy and other financial dealings.

This is simple payback for Washington's threats, banking fines and penalties against institutions and nations de jure that fail to march to the US tune of dictating trade and financial arrangements. The world is now ganging up on the United States because Washington has terrorized smaller nations around the world for decades as the big bully on the block.

We've had the misfortune of watching ISIS – originally funded and equipped by the US, Saudi Arabia and other Persian Gulf allies, as was Bin Laden – turn on their benefactors out to destroy Assad in Syria because of a pipeline deal and take over much of Iraq. My point is just as the pro-US South Vietnamese government could not survive without major US forces, neither will the present government in Baghdad. So what could happen to the massive, fortified Baghdad US Embassy in the Green Zone that rivals the Vatican in size? What are the possible military objectives of the Islamic State fighters (ISIS) in regard to the Iraqi capitol?

While the US media elites and the Air Force concentrates on a meaningless ISIS backwater diversionary attack on Kobane on the northern Syrian border with Turkey, their real target is Baghdad and this will likely become very apparent between now and the end of the year. Our military experts confidently state that ISIS does not have enough troops to take and hold Baghdad, a city of 7 to 9 million people. They are correct unless ISIS wants to destroy its forces like the German Wehrmacht squandered its strength fighting in Leningrad or Stalingrad.

But they can win major PR victories without getting bogged down in street-to-street fighting in the Shiite areas in the north and east. Baghdad has been a city in transition since the Bush invasion created a power vacuum and endless violence in the capitol. Historically full of neighborhoods with a mix of Sunni and Shia, the population division is now almost complete with most Shia concentrated in the north and east of the river and most Sunni in the area stretching from the airport to the American Green Zone. Here lies the problem: The western Sunni neighborhoods are perfect cover for the Islamic fighters to slowly infiltrate the area around the Green Zone and embassy compound and mix in with the population. After all, this is a Sunni insurrection against the majority Shia government.

Hence the ISIS advance in Anbar province to just outside the airport is a direct threat to the Green Zone because their forces will be moving through predominantly Sunni neighborhoods all the way east to the American embassy. They could but surprisingly have not attempted to shut down the airport and here is where the situation gets interesting. Late this week, the Iraq army leadership basically said that unless US forces arrive to help them defend the western approaches to the city, they will throw down their weapons and go home – and I believe they will.

The scenario I see is the first attack will likely be against the most heavily defended target, the US embassy and the Green Zone. The ISIS fighters are not strong enough to take the heavily fortified green zone by direct assault and so it will probably fail.

The US will then attempt to fly in reinforcements to the airport and this will be when ISIS will start mortar fire and attempt to close the Baghdad airport as well as attack any convoys through the Sunni neighborhoods heading to the Green Zone. They will likely be able to shut down the airport, thus forcing reinforcements and embassy staff leaving to use helicopters for transportation to airfields further south in Iraq or maybe even to Kuwait. Closing the airport will be a major public relations victory for ISIS.

A siege of the Green Zone and American embassy will likely then take place and the US will be forced to destroy by air the Sunni neighborhoods surrounding the area from the zone west to the airport at a minimum resulting in heavy Sunni civilian causalities. Once again, more bad PR for the United States.

Eventually, the US may well be forced to close the embassy and withdraw from the Green Zone, which will result in videos that remind the American public of the Saigon collapse back on April 30, 1975. This would be a tremendous PR victory for the extremists, resulting in more fighter recruits.

Finally, if the US is forced to withdraw from their fortified embassy then, of course, ISIS will take over America's largest embassy in the world. Note, this embassy compound can hold 35,000 American personnel and is basically a small city-state within Baghdad that is massively defended.

This, again, is another victory for ISIS. Finally, the US may well decide to destroy the entire Green Zone and embassy by air to prevent its occupation by the terrorists. This will provide yet more videos – the US destroying its biggest embassy in addition to our earlier air attacks directed at our own tanks and trucks taken by ISIS troops when the Iraq army ran away from Mosul and northern Iraq.

Although the Bush invasion of Iraq has been a costly tragic mistake for all involved, we would do well to never again put US troops back on the ground there. Otherwise, our other economic and financial weaknesses and major threats to our national interests, including the end of the dollar as the world reserve currency, could happen far sooner when combined with a major military defeat and loss of prestige that does not have to take place.

I will be writing more about what happens on the home front to private wealth, prosperity and property when empires collapse and why American investors should look now at possible safe haven opportunities and global investment alternatives to survive and prosper in the future. Remember, all empires die but – although seldom covered in the history books – it is never a pleasant experience for the citizenry.

Update: When it comes to possible safe haven opportunities High Alert is now devloping an opportunity to secure a second home in a second country. I encourage you to check out the website now.