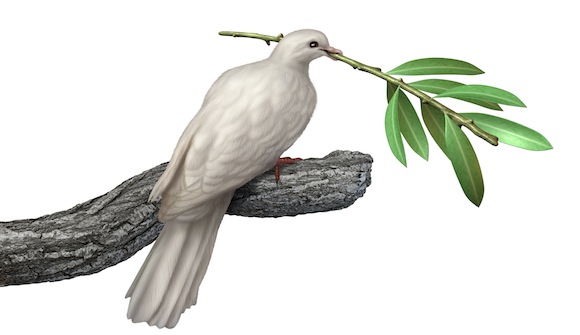 Last week, for the first time since the 1979 Iranian revolution, the US president spoke with his Iranian counterpart. Their 15 minute telephone call was reported to open the door to further high-level discussions. This is a very important event.

I have been saying for years that we should just talk to the Iranians. After all, we talked to the Soviets when they actually had thousands of nuclear missiles pointed at us! The Iranians have none, according to our own intelligence services. I even suggested a few years ago that we should “offer friendship” to them. Unfortunately, so many so-called experts have a stake in keeping tensions high and pushing us to war. They did not want to hear what I was saying. It seems, though, this is beginning to change now with these recent events.

The phone call was one of the most important moves away from war and conflict in a long time. Taken with the Obama administration’s decision to hold off on bombing Syria, we should be encouraged.

It is also probably a good sign that this phone call has infuriated the neoconservatives at home, the pro-war faction in Israel, and the hard-liners in Iran. Now that a process of negotiation has begun, the chance of war has been significantly reduced. The US is very unlikely to bomb Iran while it is talking with them, and Israel is also unlikely to start a war while the US is at the negotiating table with the Iranian leadership.

But we should also remain very cautious. Obama’s war on Syria was only stopped because the American people finally stood up and said “enough.” The message was received loud and clear and it shocked the neocons pushing war. They were used to being in charge of foreign policy.

In a recent CNN poll, more than 75% of Americans favored negotiations with Iran. This is very good news, but those pushing for war will not give up that easily. Believe it or not, some Members of Congress have recently introduced legislation to authorize war on Iran – even as these first steps toward a peaceful resolution of our differences begin to bear fruit!

So no, they will not give up that easily. There are many in the president’s own Cabinet who do not want to see US/Iranian relations improve. Even the president himself seems unable to avoid provocative statements — such as his claim that the Iranians are only willing to talk because the sanctions have been so successful in bringing them to the table. That is a false and unnecessary boast, and if he continues in such a way he will destroy what progress has been made.

But we are in the majority now. There are more than three-quarters of us who do not want war on Iran. It is essential that we keep the pressure on the Administration to ignore the war demands in both political parties and among the so-called foreign policy experts. There will be much more war propaganda coming our way as the warmongers get more desperate. Americans must see this propaganda for what it is. They should educate themselves and become familiar with alternative news sources to gain the tools to counter the propaganda. We do have a better chance at peace, but this is no time to let down our guard!

Article provided courtesy of the Ron Paul Institute for Peace and Prosperity.