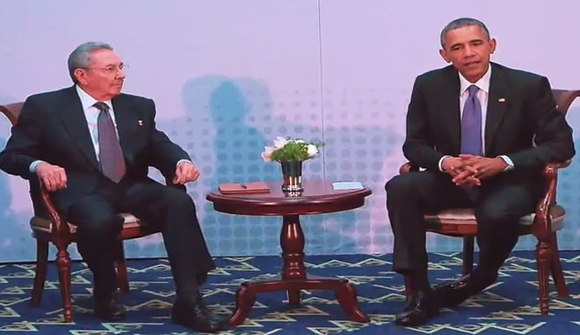 EDITORIAL
For Normal Relations With Cuba, End US Interventionism
By Ron Paul - July 06, 2015

Last week we saw an encouraging sign that the 50 year cold war between the US and Cuba was finally coming to an end. President Obama announced on Wednesday that the US and Cuba would restore full diplomatic relations and that embassies could be re-opened in each country by the end of the month.

For this achievement, which was resisted by vested interests in the US, Obama should be praised. However we shouldn't be too optimistic about truly establishing normal relations until we understand how relations became so abnormal in the first place. The destruction of relations between the two countries was preceded by US intervention on behalf of a hated Cuban dictator, Fulgencio Batista, which had turned the Cuban people against the United States and set the stage for the emergence of Fidel Castro.

In 1944, after Batista's first term as president of Cuba, he emigrated to the United States. When his campaign to return to office in 1952 looked lost, he led a military coup, seized power, and declared himself president. The US government quickly recognized his military junta as the legitimate government of Cuba and began propping him up. Much of the Cuban economy was in the hands of well-connected US companies, and the US government exerted its influence to their financial benefit.

The Cuban dictatorship was helped along by US assistance. The secret police was trained by the United States and was used to brutally suppress any political opposition. Almost all US aid to Cuba was in the form of military equipment used brutally against the Cuban people. The US was seen as the force behind Batista's dictatorship.

As John F. Kennedy said while campaigning for the presidency in 1960:

Fulgencio Batista murdered 20,000 Cubans in seven years … and he turned Democratic Cuba into a complete police state — destroying every individual liberty. Yet our aid to his regime, and the ineptness of our policies, enabled Batista to invoke the name of the United States in support of his reign of terror.

US intervention in Cuban affairs really got a boost when Batista was overthrown by the young revolutionary Fidel Castro. As Stephen Kinzer writes in the excellent book, "The Brothers," Castro's rise to power was not immediately condemned by the US. When Castro traveled to the US shortly after taking power, he met with Vice President Richard Nixon, who found that Castro "has those indefinable qualities which make him a leader of men." But Nixon worried that the US might not be able "to orient him in the right direction." Nixon was concerned that Castro sounded too much like Indonesian president Sukarno, who urged countries to join a non-aligned movement to resist both superpower camps at the time. The US could not tolerate the non-aligned movement and pushed a zero-sum game in global politics.

When Washington realized it could not control Castro, it embargoed the island and began launching plots to overthrow and even kill him. US policy likely was responsible for Castro turning to the Soviet Union in the first place.

This US intervention in Cuba's internal affairs continues to this day. Even under Obama several US plots to overthrow the regime have been exposed. So while opening an embassy in Havana is a positive step, this embassy must be used to help promote truly normal relations with Cuba. That means an end to the embargo, an end to the travel ban, and an end to US interference in Cuba's internal affairs. A more free and prosperous Cuba will not emerge as long as US interventionism continues to turn Cubans against the United States.