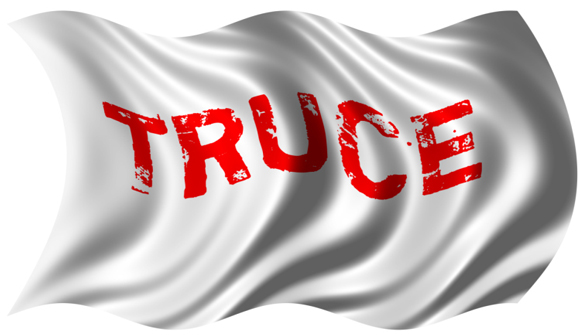 One hundred years ago last week, on Christmas Eve, 1914, German and British soldiers emerged from the horrors of World War One trench warfare to greet each other, exchange food and gifts, and to wish each other a Merry Christmas. What we remember now as the "Christmas Truce" began with soldiers singing Christmas carols together from in the trenches. Eventually the two sides climbed out of the trenches and met in person. In the course of this two day truce, which lasted until December 26, 1914, the two sides also exchanged prisoners, buried their dead, and even played soccer with each other.

How amazing to think that the celebration of the birth of the Prince of Peace could bring a brief pause in one of the most destructive wars in history. How sad that it was not to last.

The Christmas Truce showed that given the choice, people do not want to be out fighting and killing each other. It is incredibly damaging to most participants in war to face the task of killing their fellow man. That is one reason we see today an epidemic of PTSD and suicides among US soldiers sent overseas on multiple deployments.

The Christmas Truce in 1914 was joyous for the soldiers, but it was dangerous for the political leadership on both sides. Such fraternization with the "enemy" could not be tolerated by the war-makers. Never again was the Christmas Truce repeated on such a scale, as the governments of both sides explicitly prohibited any repeat of such a meeting. Those who had been greeting each other had to go back to killing each other on orders from those well out of harm's way.

As much as governments would like to stamp out such humanization of the "enemy," it is still the case today that soldiers on the ground will meet and share thoughts with those they are meant to be killing. Earlier this month, soldiers from opposing sides of the Ukraine civil war met in eastern Ukraine to facilitate the transfer of supplies and the rotation of troops. They shook hands and wished that the war would be over. One army battalion commander was quoted as saying at the meeting, "I think it's a war between brothers that nobody wants. The top brass should sort things out. And us? We are soldiers, we do what we're told."

I am sure these same sentiments exist in many of the ongoing conflicts that are pushed by the governments involved – and in many cases by third party governments seeking to benefit from the conflict.

The encouraging message we should take from the Christmas Truce of 100 years ago is that given the opportunity, most humans do not wish to kill each other. As Nazi leader Hermann Goring said during the Nuremberg war crimes trials, "naturally, the common people don't want war; neither in Russia nor in England nor in America, nor for that matter in Germany." But, as he added, "the people can always be brought to the bidding of the leaders. That is easy. All you have to do is tell them they are being attacked and denounce the pacifists for lack of patriotism and exposing the country to danger. It works the same way in any country."

This is where our efforts must be focused. To oppose all war propaganda perpetrated by governments against the will of the people.