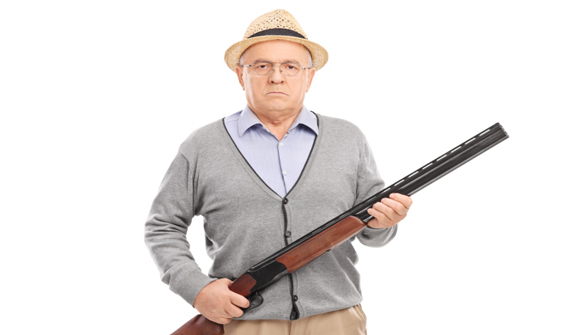 It's 3:00 in the morning. Your wife and young children are asleep. You hear a commotion outside, followed by the sound of a window rattling. You get up, grab your 12 gauge and creep down the stairs. You hear window glass breaking. A black-clad man scrambles in, and while he does, you exercise your right to defend your house and shoot. The man dies.

In a free society, this would be an acceptable, indeed, admirable, use of force in defense of your home and family. There's only one catch: the man you shot is a cop. In a free, sane society, the benefit of the doubt would be given to you. You saw a masked thug climbing into a broken window, and for all you knew, intended to kill you and your family. You used justifiable deadly force to repel an attack against your home.

The fault would lie with the team of officers who attempted a highly dangerous operation that got a fellow officer killed, and they would be punished accordingly for acting so stupidly. Amiright? BUT, we don't live in a sane society do we? We live in a 50k SWAT raid-per-year society, a society that worships police and when something like this does happen, the police are given a pass and the man defending his home from an unknown threat is charged with murder.

Killeen, Texas resident, Marvin Louis Guy, is just such a man, in just such a situation. You see, the Killeen SWAT team thought it would be a grand idea to execute a no-knock raid on Guy's house at 5:30 in the morning. As they were breaking through his window, Guy opened fire on them, killing Charles Dinwiddie and wounding three other officers. They were acting on a bogus tip from an informant who promised that bags of cocaine would be found. Nothing of the kind was recovered. Charges against Guy do not stem from any drug crime, but solely from his successful attempt to fend off an attack on his home.

From KDH News: In Texas, anyone who kills a peace officer who is acting in the lawful discharge of an official duty can be charged with capital murder and could face the death penalty, if convicted.

Texas officials should be far more concerned with the lawfulness, and wisdom, of allowing officers to engage in this type of behavior than whether to sentence Guy to life or the needle. Stories like this always bring the mind back to the senseless, artificial nature of the Drug War. The Drug War paved the way for Dinwiddie to meet his demise on that early morning. Without the Drug War he would still be alive. Guy's life wouldn't currently be hanging on the slender threads of fate in Texas. The Drug War is the most reality-denying public policy being pursued today, and the body count daily climbs higher as it is allowed to continue.

Back to the beginning hypothetical: If black-clad men were breaking into your home in the middle of the night, would you use lethal force to defend your home? And if you did, and the dead intruders turned out to be police, what would it say about the society you lived in when you were sentenced to death? How much criminal activity can hide behind a badge? How far can an officer go before a citizen of a free republic has a right to intervene? And if those who are officially tasked with enforcing the law become the principal threat to the law of a free society, when will citizens put an end to the contradiction?

A man breaks into a home and the owner pulls a trigger to end a threat to his property and life. That is law; that is just. A society that recognizes it as such will draw nearer to the ideal of liberty. A society that turns a blind eye when innocent men and women are prosecuted for defending their homes will not remain free for long.

When police break into homes in the middle of the night, unannounced, they are taking their lives into their hands. It's dangerous and stupid in the extreme, and as a result, many end up dead. There are many other examples of police killing and getting killed by barging into houses in the middle of the night. It seems senseless, but these SWAT raids are a direct outgrowth of the War on Drugs.

End this ridiculous crusade against the personal choices of citizens and the SWAT raids will end. Departments will have to give up their warzone goodies, as they won't be needed any more. People will get high safely, and ditch the synthetics and prescription drugs, which have been given a market due to the War on a Plant.

The government knows this; however, the Drug War is their means into our wallets and lives, and a backdoor to our liberty. It's their cash cow, their Golden Goose, it justifies billions in government jobs and departments. It's the excuse for the Police State itself. The black-market crime wave that the Drug War gins up gives state and federal government the excuse for more legislation, more police, more abuse. It incentivizes employing more violent, authoritarian personalities in law enforcement positions. If you are in search of the hive, the Mother Brain of the American Police State, you will find it residing within the Drug War bureaucracy. Attack that bureaucracy by attacking the Drug War itself.

Legalization will deal the mortal wound to the hydra that has coiled itself around our lives and liberties. We can use its reaction as a compass. If full legalization gains steam throughout the country, every base emotion will be appealed to in order to prevent it. The creature will appeal to your fear, your anger, your patriotism, vanity, envy, pride … everything will be summoned to prevent the stake from being driven home. Ignore its screams, and act knowing full well that you act for the liberty of not just your generation, but the generations to come.