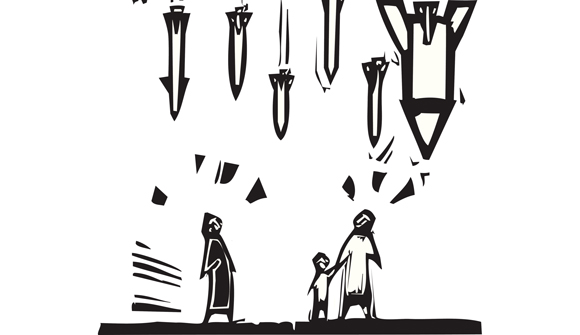 The Saudi-led war against Yemen is going very badly for Yemeni civilians. A recent Amnesty International report has revealed the extent of destruction resulting from the fighting that has been raging for the last four months:

The conflict has been raging in 20 out of the country's 22 governorates and has killed close to 4,000 people, half of them civilians including hundreds of children, and displaced over one million since 25 March 2015. All the parties involved in the conflict have displayed a flagrant disregard for civilian lives and fundamental principles of international humanitarian law. They have killed and injured hundreds of civilians not involved in the conflict, many of them children and women, in unlawful (disproportionate and indiscriminate) ground and air attacks.

With many women and children among the slaughtered as the Saudi "coalition" bombs civilian centers – including a brutal wave of air strikes on the Yemen aid port Hodeida – a cold chill should run down the spine of every American once it is revealed who is paying for all those Saudi warplanes that are now raining death upon civilians. The ugly truth of this conflict is that Saudi Arabia has received the full support of the US government, apparently in the belief that any enemy of Iran is a friend of ours and that any means, no matter how barbaric, can be justified in thwarting Iranian "influence" in the Middle East. From the Foreign Policy blog:

The United States has doubled the number of its support staff to 45 people advising the Saudi intervention in Yemen, as anti-Houthi forces have pushed north from Aden to Taiz. U.S. advisors are "providing intelligence, munitions and midair refueling to coalition aircraft, and U.S. warships have helped enforce a blockade in the Gulf of Aden and southern Arabian Sea intended to prevent weapons shipments from Iran to the Houthis," reports the Los Angeles Times. While the United States is continuing to target al-Qaeda in the Arabian Peninsula's operations, AQAP is apparently filling some of the vacuum left by retreating Houthi forces.

This is as textbook an example of the poison fruits of entangled alliances as can be found. It's an ugly, bloody affair, and our government has civilian blood on its hands by inserting itself into this ridiculous conflict far away on the other side of the planet. We've rubberstamped it, and in so doing are complicit in whatever war crimes the Saudis deem fit to commit.

The Amnesty International report details one of the egregious crimes committed by Saudi forces:

Coalition forces bombed a residential compound housing workers of the Steam Power Plant and their families in the south-western port city of Mokha on 24 July at approximately 10pm, killing at least 63 civilians and injuring 50 others.

On 9 July coalition forces killed 10 members of the Faraa family, including four children and five women, and injured 10 others when they bombed the Mus'ab ben Omar school where a dozen families displaced by the conflict were sheltering in Tahrur village, north of Aden in Lahj governorate on 9 July at about 1pm. The displaced people who were sheltering in the school are members of the "muhammashin" (marginalised) community – Yemeni citizens of African origins, one of the country's poorest and most vulnerable communities in the country.

I've never been in a conflict zone, where my family and friends are killed by a neighboring government, but I don't enjoy imagining what it's like to know they've been murdered by a foreign power, and that I'll never see them again. Yet this is what Yemeni civilians are enduring, and we better believe they know where the Saudis are getting their planes and their bombs.

The US government, by providing military aid to the Saudis, has dragged US civilians into the conflict as well. In five, ten or twenty years hence, when a terrorist group has emerged from the ashes of this bloodbath and finds the opportunity to massacre US civilians in the name of their dead, will we find solace in the fairytale belief that "they hate us for our freedom"? Or will we instead look deeper and realize that our problems derive from callous mistakes made years before? The Saudis are waging total destruction against the Houthis, rebels who have gained several strategic advantages throughout Yemen. That situation should not matter a whit to us. We should stand back, let them kill each other and stay out of it.

The concept of "blowback" is more than just theory. It's as immutable a law of human nature as can be discovered. All actions have consequences and no man, woman, or empire is exempt. Our government is in the hands of fools who can't see past their noses, who apparently believe future blowback is a small price to pay for whatever gain they believe will come from being directly involved in this regional conflict. But there are no gains. Whatever benefit our "leaders" see in this is an illusion. The cost of our part in it, like all costs the government incurs, will be borne by US citizens. These distant conflicts benefit no one, and the short-term "gains" will quickly be erased when the bill comes due.