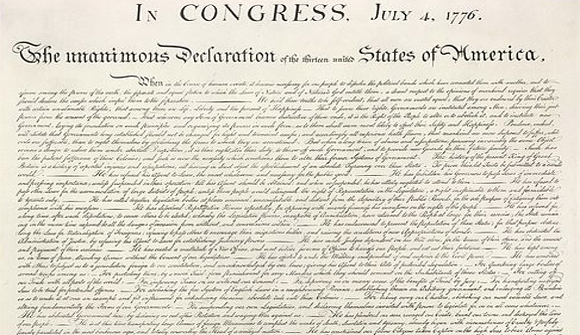 Given the considerable power and success of the Declaration of Independence, its detractors – e.g., Professor Garry Wills, in his massive effort to belittle it in his book Inventing America (Houghton Mifflin, 1978, 2002) – are hard put to refute the philosophy expressed in and underlying it. (See, also, Benjamin Gregg, Human Rights as Social Construction, New York: Cambridge University Press, 2012.)

But since that philosophy stands in the way of most ideas favoring some people's rule over other people, the effort to besmirch it continues. Such a bulwark against statism needs to be eroded, which is why statists try to defeat and distort its unassailable points. It needs to be "shown" that its ideas do not rest on solid natural foundations but on mere arbitrary inventions!

There is much in the Declaration that is plainly and undeniably revolutionary. When compared to the political ideas that have been deployed to buttress the rule of monarchs, tsars, majorities, or elites, the Declaration sets out to replace all these with the idea that it is the adult human individual who is sovereign in societies, not some special bunch or even those in the majority. You and I, individual human beings, are the best candidates for governing our lives. And that idea doesn't sit well with either the Left or the Right.

The Left has argued, instead, that everyone is but a cell in the organism of humanity and the idea of independent self-governance simply cannot make sense. Private property, especially, is anathema to the Left's political thinking since it is the social devices by which independent authority is secured for individuals.

In the last analysis, however, the Left's collectivism is but a sneaky way to elevate some folks, "leaders" on the Left, into positions of rulers over the rest. Obviously, if one can demean individuals, they will tend to cave in to the propaganda that they don't matter much and what is important is the group or collective or society (which then needs to be guided by special people).

Yet the idea that individuals can think for themselves about vital matters, like how to live their lives, how to govern their communities, is also at odds with the Right. This was very well expressed by the Right's foremost philosopher, Edmund Burke, when he wrote: "We are afraid to put men to live and trade each on his own private stock of reason, because we suspect that this stock in each man is small, and that the individuals would do better to avail themselves of the general bank of nations and of ages." Reflections on the Revolution in France (Indianapolis: Hackett Publishing Co., 1987), p. 76.

Never mind, one may suppose, that this "general bank of nations and of ages" is, after all, the accumulated work of private individuals. And never mind, also, that Mr. Burke himself, who advises us to reject individualism, is of course a human individual, not a country or society or tribe. But such paradoxes do not seem to disturb those who are bent on wresting power from the rest of us with any sophistry they can concoct, including the sophistry that individuals are inept and cannot run their lives.

None of this demeans, in turn, the value of our consulting our fellow human beings from throughout human history. That is why education is so vital. But in the last analysis the teachings of past masters need to be evaluated and constantly improved upon by the individuals who aim to learn what they have to offer. An uncritical compliance with the traditions that are afoot in any society robs us of the greatest resource for solving our problems, individual or social, namely, the critical and creative minds of individuals.

The effort to denigrate the human individual calls to mind an astute piece of advice given to thinkers by one of them: One "cannot present a picture of man which patently contradicts his behavior in presenting that picture," wrote D. Bannister, in a contribution to the book, Explanation in the Behavioural Sciences (Cambridge UP, 1970), p. 417. Yet that is exactly what is attempted by those who want to besmirch individualism. If one accepts their counsel, one must also reject it since it is advanced by an individual!

The American Revolution is revolutionary precisely because, after centuries of most people accepting the contrived story that they do not amount to much and thus have no right to resist those who would subjugate them to their will, it affirms, in clear terms, every human individual's natural rights to life, liberty and the pursuit of happiness.

Anyone can see, with a bit of reflection, that this idea is four square opposed to people, even governments, ruling the individuals who comprise the citizenry.