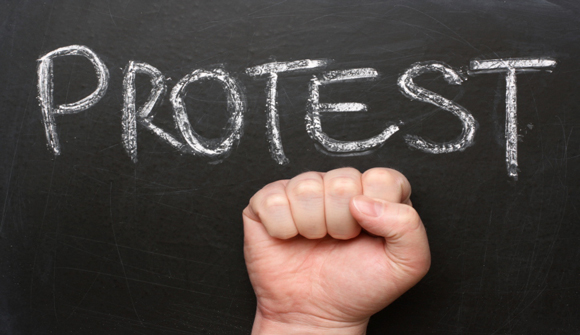 USC economist Arthur Laffer identified, back in 1974, an interesting feature of oppressive public policies, applicable in numerous areas of concern to us. The principle acquired the name "the Laffer Curve" and its gist is that people will normally tolerate imposed burdens (what I call petty tyrannies), such as heavy taxes or government regulations, only up to a point, after which they will begin to resist and rebel against them.

It was former Wall Street Journal associate editor Jude Wanniski who coined the term, based on his recollection of a meal he had with several prominent Republican politicians – Rumsfeld, Cheney, Ford, et al. – during which Professor Laffer drew his "curve" on a napkin. When you reach the top of the bell-shaped curve, he argued, people will begin to protest and resist the impositions.

A while ago two leaders of the center-left think tank, Third Way, wrote that "economic populism is a dead end for Democrats." Jon Cowan and Jim Kessler argued, in The Wall Street Journal, that plans to increase Social Security benefits, put off Medicare reform and raise taxes on the rich, espoused by liberals like new member of Congress Elizabeth Warren, "are irresponsible, substantively and politically."

The crux of this critique harks back to Professor Laffer's insight, namely, that people will tolerate a lot of impositions and burdens but only up to a point, after which the cliché that "one cannot get blood out of a turnip" begins to apply. I am personally reminded of Laffer's insight whenever someone asks me, "Well, if the government is getting so bad in America, why don't you leave for, say, Lichtenstein?" My reply is that I have too many ties to people and places in this country and it would take a good bit of trouble for me to leave. (I already left a country once in my life, when I was smuggled out of communist Hungary in 1953. But Hungary was a hellhole all around, substantially worse than what the USA is today!)

People put up with a lot of adversity in order to retain the benefits they enjoy in their admittedly overburdened lives. But they do so only up to a point and it appears that Cowan and Kessler are beginning to sense that the point is being reached on the Laffer Curve where resistance to imposing burdens on the population will not be tolerated any longer. Tax resistance and dodging may be on the horizon. Businesses leaving the country are another symptom and offshore investing yet another.

They may also recall that America was, after all, born in revolution against over-taxation by the British, as well as taxation without representation, something we can witness as policies like Obamacare impose financial burdens on members of future generations who aren't able to vote on such measures and the politicians pushing for them.

Personally, I am not very happy about Professor Laffer's insight because it may well encourage brinkmanship statism, unjust measures burdening mostly complacent people who are just not yet willing to protest.

I want people to protest now!