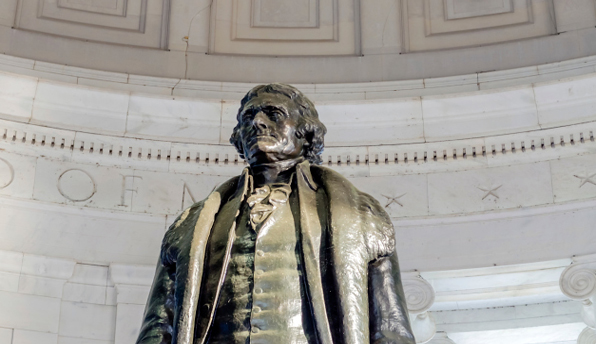 EDITORIAL
How America Was Founded
By Tibor Machan - April 02, 2014

There is an ongoing debate afoot about America's founding. Basically, the issue is whether the country is based on Christian or on secular principles. There is some credibility in both claims.

If one takes the Declaration of Independence as the most basic statement of the American political tradition, the political philosophy on which the country had been based by Thomas Jefferson and the other founders, some of the wording therein can suggest either of these positions. After all, there is talk in the Declaration of how "men are created equal" and are "endowed by their Creator, with certain unalienable rights [to] life, liberty, and the pursuit of happiness."

As the creationists would hold, we have here a clear allusion to a Supreme maker who produced the human species and endowed it with the rights mentioned above. But that is by no means the only or arguably best rendition of the meaning of "endowed by their Creator."

There are other ways in which creations can come about. Take the Grand Canyon, which is also created, but arguably not intentionally or deliberately but by means of the forces of impersonal nature – erosion, earthquakes, floods, volcanoes, etc. All these can be and often are agents of natural creation. So a tsunami is created, as is a tidal wave.

So when Jefferson & Co. declared that human beings have unalienable rights "endowed by their Creator," they were by no means committed to holding that a conscious being, such as God, need have had a hand in this. Indeed, what the Declaration states is fully consistent even with the idea that evolutionary forces produced the human race. And as it turns out, members of the human race have unalienable rights in virtue of their nature, of the kind of being they are. Be it God or impersonal nature that was the agent of creation, what is crucial is that what had been created is a species the members of which have fundamental rights.