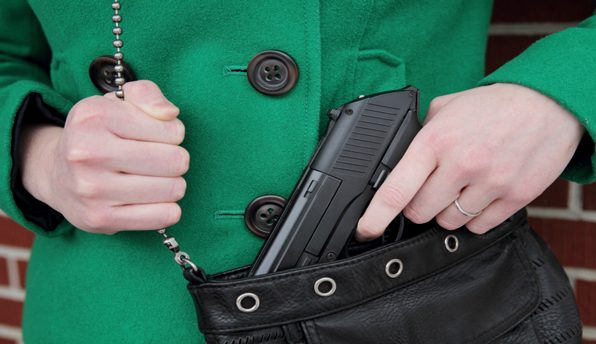 Arms are weapons with which to physically overpower others. There are justified and unjustified cases of overpowering others. Self-defense is clearly a case of the former. Aggressing upon another, robbing, murdering, raping, assaulting or kidnapping another would be cases of the latter. Not all guns are but most can be arms.

A principle of the legal system of a free society that is directly derived from the existence, respect for and protection of individual rights is due process. No one's conduct may be banned or regulated without it being very probable that such conduct amounts to rights violation.

Ownership of arms by no means implies their unjustified use. The display of arms, in certain circumstances, could, however, constitute a probable cause for being disarmed. If one aims a bazooka from one's front yard at a neighbor's home, especially one with whom one has had some sort of acrimony brewing, that could qualify. In such a case an injunction against the use, perhaps even ownership, of the weapon in question could be justified.

Barring any such circumstance, ownership of arms is akin to ownership of anything else, a case of the exercise of the right to private property, which in a free society would not be violated.

There are those who advance certain kinds of utilitarian arguments against gun ownership and purchase by citizens without any criminal record or similar valid impediments to such ownership. Some probability does exist that arms will be misused more if their ownership is not prohibited than otherwise. Of course, this is true for implements other than weapons.

In a free society the task of law enforcement would be, in part, to stand guard against the misuse of any weapons or other implements, provided such guardianship does not itself violate individual rights. Furthermore, in the absence of the right to private property as applied to arms, the government and criminals would be the only segment of society that would have free access to them. That also creates a likelihood of the successful illicit use of arms. So the utilitarian case is mixed, even if that were all about which we needed to be concerned. Indeed, the empirical data appears to demonstrate that when ordinary, non-criminal people have their right to bear arms respected and protected, violent crime, which includes shootings, go down in frequency, while the increase of restrictions has been accompanied by a rise of such crimes.

In any case, however, rights trump utility, since rights are derived from our very nature as human beings, while that is of utility is extremely unstable, dependent on fluctuating needs and wants. In the US the federal Constitution, accordingly – in the 2nd Amendment of its Bill of Rights – bans government control of private arms. The people are said to have the right to bear arms, not only because, as argued here, they have the right to private property in general but also because it is likely that when government bans weapons for the citizenry, its power over the citizenry grows and is likely to be exercised more freely. Indeed, many measures of the government constitute invasions, violations of individual rights, and in justice citizens ought to be disarmed when coping with these. Not that armed resistance need be their first recourse in the face of such rights violation. However, whatever recourse they do take, it is useful to have their actions backed with the fact that they could defend themselves against an out of control state.

Some have argued that no absolute right to owning guns can be justified. Indeed, they have held it against libertarians that they lack flexibility in these matters and insist on an artificial absolutism. Yet this is not a very convincing point at all. Those who champion a fully free society are not mindless dogmatists, merely principled. And being principled means, essentially, that the default stance on any issue is a basic principle, in this case that of individual liberty. If, as already noted, it can be shown that a clear and present danger exists from someone's ownership of arms, in a free society legal avenues would exist to meet this eventuality. But the first option on the books would be for no one to prohibit anyone else from owning and using arms unless this involves the violation of another's rights.

A full defense of the right to private property and gun ownership would need to address more fundamental matters, of course. But in the present context those fundamental matters are not at issue. The question is how various public policy matters must be reconciled to the truth of basic libertarian principles. Banning guns does not succeed and, is furthermore, shown to be counterproductive. It seems, in addition, to be a grab for power rather than some safety measure imposed by benign politicians and bureaucrats.

In most societies there are now immense public realms, under the administrative authority of governments. Thus, for example, most primary, secondary and higher education establishments are administered by governments. In the course of such administration various policies appropriate to the management of the school in question may be instituted and these will, in the last analysis, amount to government regulation. A ban on weapons in the schools, then, may seem like a case of government violation of the 2nd amendment, although that is by no means clear cut. Instead, this is the result of government having inserted itself into this essentially non-public activity in society, which has gained it a foothold in directing people's lives.

In a fully free system, wherein government would only do its proper activities, namely, secure our rights to life, liberty and the pursuit of happiness (property), no bans on guns by government would exist. However, the innumerable private institutions throughout the community could establish rules of their own, including those that would regulate the use of arms. That kind of system, with its built in provision for a plurality of solutions to diverse problems – which contrast with the insufferable habit government has to use the "one size fits all" approach – would be in force in a free society.