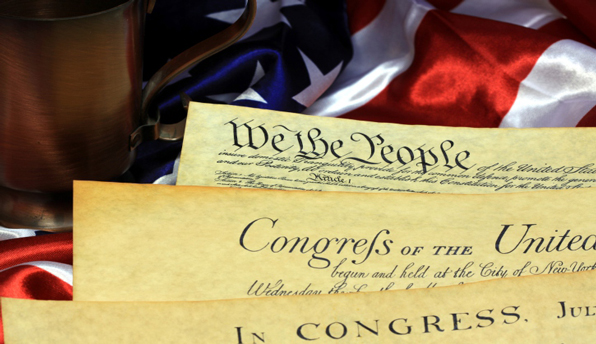 The concept of "rights" was developed, in part, from the concept of "right" – correct, true – as used in the tradition of natural law ethics (concerning how we ought to act or not act because we are human beings). In time, a natural rights theory was produced by John Locke (1632-1704). It addressed our political life – how our human communities should be governed, organized. Supposedly because of our human nature, certain standards of conduct apply to us as we carry out our community affairs, how we relate to each other, etc.

1. What did the theory contend are our basic individual rights? Locke argued that each of us has rights to our lives and resources, including what we produce or create. We are supposedly sovereign, so no one may rule us; slavery, serfdom, involuntary servitude are forbidden. Any such relationship of ruler and ruled between us and others, Locke argued, is contrary to our nature. (Lockean basic rights are sometimes called "relational." They serve to identify, Locke maintained, the principles of the most basic relations between people, ones never to be violated, even by government, even in war time, even in emergencies.)

2. The Lockean theory had considerable impact on Anglo American jurisprudence. Having Lockean rights, for example, implies a legally enforceable obligation on the part of everyone to respect them, not to violate them; for anyone who chooses to live in a human community, such obligations are binding. Modern Lockean theorists such as Robert Nozick argued that these basic rights identify the "borders" or "side constraints" around people, the area of their free actions, ones others have the enforceable obligation not to trespass on.

3. In the natural rights tradition of our basic rights, they are compossible, which means everyone has them and they must be equally respected regardless of who the holder is, man, woman, black, white, tall, short, native or from abroad. These are what the natural individual rights are that Locke identified. Each of us has them because we are all human beings (that is, because of our human nature).

4. The American Founders also called these Lockean rights unalienable because, as Locke and his followers viewed it, just by being a human being, each of us is supposed to possess them and cannot lose them. (Even when we commit crimes for which we are convicted and put into jail, our Lockean rights remain intact because, supposedly, this outcome stems from a choice we have made that has the predictable consequence that we will be banished from society.)

5. John Locke argued that since each of us, in adulthood, is "free and independent," when we live in communities this needs to be acknowledged and we need an institution, a legal order, so as to protect our freedom and independence. Because Lockean basic rights are prohibitions on others, they are called "negative" rights – they are supposed to place a "stop" or "halt" sign before everyone, requiring each to abstain from violating them.

6. As Locke and quite a few others before him – in what is called the Natural Law tradition of ethics and politics – maintained, our basic rights are supposed to be natural and thus not created or granted (as privileges would be) by people, including governments. Governments or lawmakers are themselves supposed to be bound by these rights to conduct their administrative and other duties without violating them. The laws of a just society, Lockeans argue, lay out these rights in their basic document, such as a constitution (in, for example, the US Bill of Rights) and legislators are to be guided by such a document to only make such laws that do not violate these rights; justices are then supposed to be responsible to strike down laws that violate them when the legislators are so zealous as to make them despite what their constitutionally limited powers authorize them to do.

7. All rights are prohibitions, even the more recent so-called positive rights, such as the right to health care or social security (those listed in what Franklin Delano Roosevelt called the Second Bill of Rights). If we do have such positive rights, it implies that no one may prevent us from obtaining them (e.g., health care, education). Since, however, if we have positive rights, their respect and protection would violate our negative rights, Lockean theorists do not defend positive rights and claim it's wrong to believe in them.

8. Does the US Constitution exhibit the influence of basic (Lockean) rights theory? Let's consider the 4th Amendment, which speaks of "the right of the people to be secure in their persons, houses, papers, and effects, against unreasonable searches and seizure, shall not be violated," etc. Or the 5th Amendment, which speaks of private property that may not be taken unless for a uniquely public purpose (court house, police station). These amendments reflect Locke's own identification of private property (estate) as a fundamental right.

9. When the US Constitution's Bill of Rights mentions, in the 6th Amendment, that "In all criminal prosecutions, the accused shall enjoy the right to a speedy and public trial, etc.," this shows the influence of the Lockean idea that each of us has a natural right to his or her life and liberty, meaning that only if there is credible reason provided in an orderly fashion may someone be incarcerated and only if there is a prompt procedure afoot making sure that the charges against the individual will be fully investigated. The idea that it is the prosecution who has the duty to make a case against the defendant in a criminal case reflects the (Lockean) idea that each of us is indeed free and independent and must be so treated unless we have ourselves forsaken or voided such treatment by our commission of a crime that violates the rights of someone else.

In the kind of political system the Founders of the American republic set out to establish, the rights everyone has, given that they are unalienable, may not be set aside even in times of emergency or danger. As Benjamin Franklin put it, "Those who would sacrifice liberty for security deserve neither…."