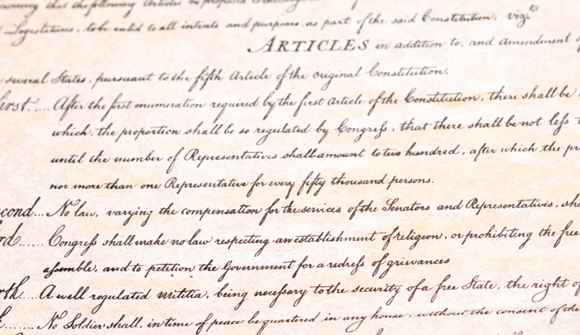 EDITORIAL
Why the First Amendment?
By Tibor Machan - September 03, 2014

It has puzzled me for some time why campaign contribution is considered a First Amendment constitutional issue. If I write out a check to some candidate, I am not talking, writing an essay, carrying some poster in a parade or anything that could be construed as speech or writing, so the freedom to speak or write is moot in this context. What I am doing is making use of my own money or resources and that, of course, in a bona fide free country everyone has the right to do, like sending money to the Red Cross or earthquake victims. This should all be considered under the protection to the right to private property. My money, therefore my decision how it will be used. Unless I use the money to violate someone's rights, there can be no objection to my use of it.

Suppose, now, that I have started a company and others are voting stockholders in it and we have decided, by following faithfully the legal bylaws, to spend some of our resources on supporting some political measure or candidate. Why should this be anyone's business other than those whose funds are being used? Why, moreover, is this thought to be a first amendment issue? It has nothing to do with religious freedom, with writing editorials or books, or pamphlets that express some viewpoint. It is giving what belongs to us, the corporation – that is to say, a bunch of incorporated free citizens citizens with full rights recorded in the Constitution – to the organization. And free men and women may not be barred from doing this.

I have heard it exclaimed that corporations are not individuals with rights. But why not? Corporations are established and maintained by individuals with rights, no different from teams or orchestras. I always think of these when this issue is raised – surely those groups are composed of individuals with rights and thus when they make a collective decision voluntarily, they are exercising their individual rights. Can't see why not. And if we have some resources we have pooled among ourselves with which to conduct business and decide that some of the funds should be spent on making a contribution to some cause, political or otherwise, who in Earth could have any just authority to stop us? No one.

And all this is a matter of property rights, like my giving my car to some group soliciting such "in kind" contributions (as many now are). Or giving it to some friend. When I do this I am exercising my right to private property – doing what I choose to do with what belongs to me. And if I am part of a large group like a corporation, with all kinds of internal rules establishing how decisions about using and disposing the company's funds must be made, and these rules are followed, why would anyone from the outside get to have a say about where our funds may or may not go (so long as the recipient is no outlaw)?

All the fuss about the various US Supreme and other court rulings pertaining to campaign contributions would, I believe, subside once the matter were put into the right framework, namely, the exercise of the right to private property. It is not about free speech but about freedom to use what belongs to one as he or she – or they – see fit.

Maybe the reason this approach has been so widely ignored is that people who favor the freedom to be able to spend one's money how one wishes to do it lack confidence these days in the constitutional status of the right to private property, a right only mentioned in the Fifth Amendment and implicit in several others that prohibit government to embark upon various intrusive policies – unreasonable searches and seizures or the like. Sadly, only the First Amendment to the U.S. Constitution amounts to a flat out, nearly unambiguous statement of individual rights, comparable to what is found in the non-legal Declaration of Independence. So in order to secure the right of private property despite its neglect in the U.S. Constitution, supporters have decided to try to convert the First Amendment to one that defends private property rights. But this tactic has proven to be muddled and confusing and, ultimately, disingenuous.