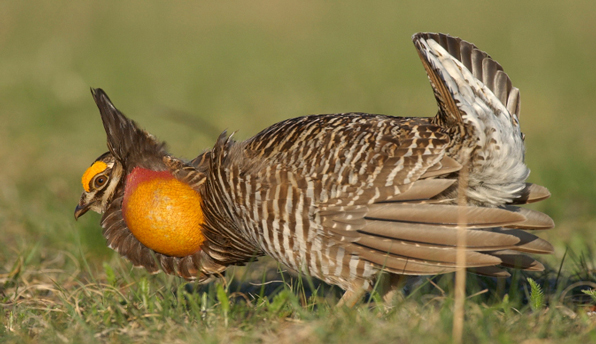 EDITORIAL
A Vast Land Grab to Grouse About
By Wendy McElroy - March 27, 2014

A March 11th headline in the The Wall Street Journal read, "Sage Grouse Rebellion. Will Obama use two small birds to limit oil drilling in the West?" The article opened, "Almost half the land west of the Mississippi belongs to the federal government, including 48% of California, 62% of Idaho and 81% of Nevada." Hungry for more, the Obama administration is poised to make the largest land grab in modern history, and to do so covertly. But people are starting to notice.

Some time this month, the Department of Interior will decide on whether to list the Lesser Prairie Chicken as an threatened species under the Endangered Species Act. Listing the grouse would give government the "right" to protect a habitat of 40-million-acres that spreads over five states: Oklahoma, Colorado, Texas, New Mexico and Kansas. Some of the land is already federal; some belongs to the individual states in question. But much of the land is privately owned, and it includes rich pockets of oil and gas as well as active ranch and farm land.

The land grab is being engineered in a manner that has become a signature of the Obama administration: quietly, autocratically and by sidestepping established restraints. In this case, the tactic is called "sue and settle."

On March 17th, the Attorney General of Oklahoma Scott Pruitt filed a landmark lawsuit against the Department of the Interior and the U.S. Fish and Wildlife Service (FWS). The lawsuit accuses the agencies of engaging in "sue and settle tactics" through which the government aligns with radical environmental groups such as the WildEarth Guardians and the Center for Biological Diversity (CBD).

Here's how sue and settle works. An environmental group with whom the FWS is friendly sues the agency for violating the Endangered Species Act. The FWS settles with the group. The settlement agreement is court approved, which makes it legally binding upon the FWS. By its terms, the FWS must meet environmental demands, such as listing a species as "threatened." This means the listing does not go through normal channels, which require studies, deadlines and public discussion. Instead, the terms and timing are set by the legal agreement. As a specific example … in May 2011, a settlement with WildEarth Guardians required the FWS to add hundreds of species to the endangered list over a period of several years.

In a press release announcing Oklahoma's lawsuit, Pruitt stated: "Increasingly, federal agencies are colluding with like-minded special interest groups by using … 'friendly settlements' of lawsuits filed by the interest groups. These settlements, which often impose tougher regulations and shorter time lines than those imposed by Congress, are having a crippling effect on the U.S. economy. Furthermore, because these settlements are taking place without public input, attorneys general are unable to represent the respective interests of their states, businesses, and citizens."

The collusion between federal agencies and environmentalists is blatant. On its website, WildEarth virtually crows as it explains that listing a species through official channels can take decades. The official process begins by identifying a species as a "candidate" for protection. Time- and money-consuming scientific studies are required before the species is moved up in priority to "threatened" or "endangered." Listings can also stir up a great deal of controversy and blowback. After all, protecting an animal or bird usually involves exerting some control over other people's property and restricting their own use of it. Owners tend to object. Legal entanglements can add an extra decade to the process, or they can terminate it entirely.

But if the listing is mandated as a court settlement, then the species is on a fast-track and not open to public review. If anyone does object, the FWS and the Environmental Protection Agency (EPA) can argue "the court is forcing us to make the listing." Meanwhile, the EPA and associated agencies grow bloated in power and size; they achieve a near autonomy in which there are virtually no checks on their decisions. The U.S. Chamber of Commerce recently pointed to "sue and settle" as being responsible for many of the EPA's "most controversial, economically significant regulations that have plagued the business community for the past few years."

The problem has become so troublesome that Congress is currently considering how to rein in the practice. Legislation has passed the House and is parked before a Senate Subcommittee where measures often die of neglect. Powerful forces are maneuvering for and against the measure.

Oil and gas are the driving passions on both sides of this debate. The tactic of sue and settle gives immense power to environmentalists who can shut down energy development that might otherwise be immune to their efforts. On the other side, states like Oklahoma are economically dependent upon oil and gas. In the most literal sense, they cannot afford to have these industries stalled.

Oklahoma is the first state to legally challenge the "sue and settle" strategy of the FWS; Texas may not be far behind. The lawsuit is also intriguing because it raises states' rights in a manner that has a significant twist. Oklahoma is asserting a right to determine events within its borders that impact its own economic well-being. It is asserting its economic independence from the federal government.

The situation will evolve shortly. The Department of Interior is bound by a settlement agreement to make a decision on the Lesser Prairie Chicken by March 31. The agency would prefer the process to be a quiet one that occurs behind closed doors. Instead, a bright spotlight is being shone on the little grouse. What is revealed, however, is a mammoth and arrogant bureaucracy that is not accustomed to being questioned. The "sue and settle" scam through which the EPA has ruled for years may be coming to an end.