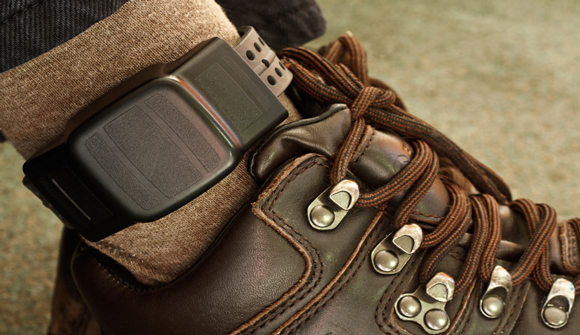 The true and staggering rate of incarceration in America is masked by the unconventional cages that are rarely factored into the head count. Many people are caged in an unconventional manner for trivial and nonviolent offenses such as driving without a license or for shoplifting inexpensive items like food. Their number is swelling for one basic reason: They increase revenue. Increasingly, the revenue does not come from tax dollars but from the offenders themselves who are forced to pay for the privilege of being caged.

How Many Are Actually Caged in America?

America has the largest prison population in the world regardless of whether it is reckoned per capita or by sheer numbers. It has 5% of the world's population but 25% of its reported prisoners. A Bureau of Justice Statistics report stated, "on December 31, 2013, the United States held an estimated 1,574,700 persons in state and federal prisons, an increase of approximately 4,300 prisoners (0.3%) from 2012."

The BOJ statistic is almost certainly understated, and badly so. Some estimate the true number of people locked up at any given time is closer to 2.4 million. This is because prisoners who cycle through the system in less than a year are often uncounted when December 31 arrives. Less traditional forms of imprisonment, such as immigration detention, are also uncounted.

There is also a huge population of caged people who are invisible to prison statistics: people on probation or parole. Probation is a period of time in which an 'offender' is monitored in lieu of being traditionally jailed. Parole is the release of a prisoner before his sentence is completed. Typically, the offender must conform to strict guidelines such as home imprisonment, drug tests, staying in the jurisdiction, checking in with a probation officer, providing for dependents and eschewing alcohol.

Global statistics on probation or parole are not as readily available as they are for imprisonment. But when America is called an "incarceration nation," those ensnared by a lesser but insidious form of imprisonment should be counted. If they were, the number of 'prisoners' in America would be even more jaw-dropping.

A BJS report entitled "Probation and Parole in the United States, 2013" estimates the population of offenders under "community supervision" (probation or parole) was approximately 4,751,400 adults for the year. That means almost one in every 51 adults in America was under surveillance. If added to the 2.4 million people imprisoned, the correct figure of people 'imprisoned' in some manner in the United States is closer to 7,151,400.

There is a compelling reason for such a huge number to lose their freedom to what is called "community supervision." Money, both coming and going. The "going" part of the money flow is the soaring cost of imprisoning people. The federal prison system's budget for 2014, for example, is reportedly $6.9 billion or $79.31 a day per prisoner. Imprisonment on the state level varies widely. The organization, The Price of Prisons, reported that "incarcerating one inmate in Fiscal 2010 cost $31,307. In states like Connecticut, Washington state, New York, the cost can rise to $50,000 or $60,000."

The coming-in part of the money flow comes from what is called "offender-funded probation" or parole. An increasingly popular option is to make offenders pay for a non-traditional form of incarceration through probation or parole. States and counties that estimate the cost of imprisoning one inmate is about $50 per day have found that the cost of probation (to them) is closer to $1.25 a day. It becomes even lower if an offender picks up the tab.

The profit accrues not merely to the army of police, probation officers, social workers and other "civil servants" who receive tax money to manage the multi-million population of offenders. It also accrues to private firms who provide so-called "services" to those who are under house arrest or other forms of surveillance. For example, in 2012, the private firm Behavior Interventions, Inc., based in Colorado, controlled about 30% of electronic monitoring. In this form of surveillance, electronic devices are worn by an offender and a "position report" is sent back to a remote control centre, often via a cellular phone network.

In an article (Jan 19) entitled "Your Home Is Your Prison: How to Lock Down Your Neighborhood, Your Country, and You," Maya Schenwar – author of the book Locked Down, Locked Out: Why Prison Doesn't Work and How We Can Do Better as well as editor of the news site Truthout – wrote, "[P]rivate companies often exact fees from the people they're imprisoning. They average around $10-$15 per day — in addition to installation costs and fees imposed for drug tests or other 'services'. Those unable to pay may be re-incarcerated in a cycle that harkens back to debtor's prison."

Human Rights Watch breaks the expenses down differently with fees varying widely from state to state. Basic supervision costs about $35 a month in Georgia but rises to about $100 in Montana. If GPS monitoring is required, the cost of the additional "service" alone could be $180 to $360 per month. The average cost of a mandated drug test is $25.

Human Rights Watch gathers stories of the hardships borne by offenders. Thomas Barrett, a former Georgia probationer, is an example. Barrett stole a $2 beer, for which he was fined $200. But the cost of his surveillance came to more than $1,000, which he owed the private company named Sentinel Offender Services. Even selling his blood did not raise enough money to appease the company. An offender who is delinquent runs the risk of being arrested for the debt, with courts almost always looking the other way as the extortion racket unfolds.

The freedom of offenders on probation or parole is severely limited. Schenwar noted: "Such a situation is certainly preferable to being caged in a prison cell." But it is far from freedom. "In reality, an ever-growing number of cages are proliferating around us, even if they assume forms that look nothing like our standard idea of a cage."

The New Cage of America

One cost-cutting option for the prison system, traditional or not, is to stop arresting people. For example, eliminate victimless crimes and the cost of imprisonment falls off a cliff. But the state is loath to relinquish either power or a cash cow.

"Every year, US courts sentence several hundred thousand people to probation and place them under the supervision of for-profit companies for months or years at a time. They then require probationers to pay these companies for their services. Many of these offenders are only guilty of minor traffic violations like speeding or driving without proof of insurance. Others have shoplifted, been cited for public drunkenness, or committed other misdemeanor crimes. Many of these offenses carry no real threat of jail time in and of themselves, yet each month, courts issue thousands of arrest warrants for offenders who fail to make adequate payments towards fines and probation company fees."

As long as an offender does not pay off the debts, he remains on probation and accrues more debt in the form of supervision fees. It is a vicious circle.

Another aspect of the booming probation and parole industry is the extraordinary privacy violations that used to be limited to prisons; they are now imposed upon people in their own homes. And all human rights are stripped away for transgressions such as stealing a $2 beer or driving without a state license.

Welcome to incarceration America. Don't be fooled by the lack of real bars.