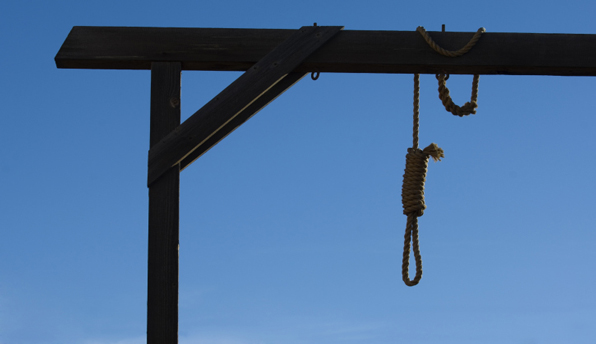 Is there a libertarian theory of vicarious liability?

I first considered the question as a result of a humorous incident. It was the last night of a conference and a few of us were sitting on a couch in a lobby off the main lecture hall in which students were gathered in vigorous discussion. The historian Ralph Raico was holding court. As I remember, he was speaking about World War I – a subject on which he is dazzling.

A student walked out of the lecture hall with a dazed look on his face. It was not a student of whom anyone was fond because of his marked proclivity to ask rude questions. Ralph's eyes narrowed as the young man approached the couch.

Somewhat later I discovered the reason for the student's distress. He'd been part of a discussion in which the other parties debated the culpability of Hitler in World War II. The theoretical question at issue was "how much direct participation does someone need to have in order to be held morally responsible for acts of war?" Putting aside his stint as a soldier during World War I, Hitler may have never directly harmed another human being. That is, he may have never mugged an old lady in an alley, slapped a child, even kicked a dog in the ribs. And, yet, history considers him to be a heinous mass murderer.

One of the debaters concluded that Hitler deserved to die in his bunker; Mussolini deserved to be hanged; but Churchill deserved death as well. For one thing, Churchill launched the firebombing of Dresden; it was part of the British strategy to purposefully bomb civilian populations and it had no military objective other than to harm German morale. It was a cynical slaughter, pure and simple.

But the dazed student did not hear a condemnation of Churchill as a cold-blooded murderer. What he heard was a defense of Hitler. In drawing Churchill and Hitler as moral equivalents, he believed the other fellow was making excuses for the Fuhrer. And, so, he wandered out of the hall and stopped in front of the couch on which the group of us had fallen silent.

"They're defending Hitler in there," he declared. "I think one guy may be a Nazi. I think there's a Nazi at the conference!"

Ralph took a drag on his cigarette and responded with a tone of muted disgust. "There's one at every conference."

The student choked out, "There's a Nazi at every libertarian conference?"

Ralph shook his head. "No. There's someone who complains about it."

Nevertheless, libertarianism requires some version of vicarious liability. If only the person who directly violates rights is responsible for aggression, then we arrive at strange conclusions. For example, the 18-year-old German soldier who was drafted in WWII against his will and shoved toward the Russian front may be a murderer while Hitler is not. By the same logic, a woman who hires a hitman to kill her rich husband has not committed a crime. Or consider stolen property. If only the thief himself is responsible for stolen goods, then a fence who knowingly accepts the purloined property is blameless. After all, he didn't steal it.

How directly does someone need to participate in violence in order to be held morally or legally responsible for it? Without excusing the German solider or the hitman, the people who authorize violence are guilty of the acts that ensue even if they do nothing more than sign their names to pieces of paper. This returns us to "vicarious liability" – albeit a different version than the one that currently dominates. By vicarious liability, I mean a type of secondary liability that derives from the common law doctrine of agency. In this context, agency means that a third party – that is, someone other than the direct participants – has the ability to control an act in some manner and so bears some responsibility for it. The more control, the more responsibility.

Vicarious liability is an essential aspect of holding politicians accountable for the harm they inflict. Unfortunately, doing so requires another layer of theory. It is a type of theory that has been much neglected by libertarianism: institutional analysis. This is the analysis of how social structures function, including the structure known as government. It is only because of the specific nature of government that a man can sign a piece of paper and cause the death of others. Without the institutional framework of the state and how its chain of command works, the two events would have no connection at all.

Within the institutional framework of the state, however, the culpability of the politician is clear. And there are at least two reasons for never allowing a politician to evade his or her guilt.

First, those who sign papers to authorize murder do so voluntarily. Unlike the soldier who is drafted and might be shot for abandoning his post, the leaders who send others to die and to kill have worked diligently to put themselves into such a position of power. They have competed vigorously for it, knowing exactly what wielding the power entails. They are fully responsible for being in office and for staying there.

Second, those who sign papers do so with full knowledge that their authorization is an integral and necessary part of killing innocents. Slaughter may not be a leader's intention. He may want simply to control a city and prefer to do so without harming a single civilian. But the death of innocents is a predictable part of authorizing a military assault. The dead bodies are foreseeable and therefore they are his responsibility.

The fact that the hands of a politician are literally without blood makes his responsibility all the more despicable. He risks nothing, not even the shine on his manicure. He never looks in the faces of the dying or hears their cries. He can pretend to be blameless.

Lyndon B. Johnson exemplifies what can happen if a politician is forced to confront his blame. Johnson ramped up the Vietnam War during his Presidency even though it greatly increased the number of American soldiers killed. In a two-week period in May 1968, American deaths reached 1,800. Johnson became so unpopular that he could not leave the White House without encountering omnipresent protesters who chanted, "Hey, hey, LBJ, how many kids did you kill today?" The chanting is said to be one of the reasons he refused to seek a second term.

Politicians know they are culpable. They must be forced to care.