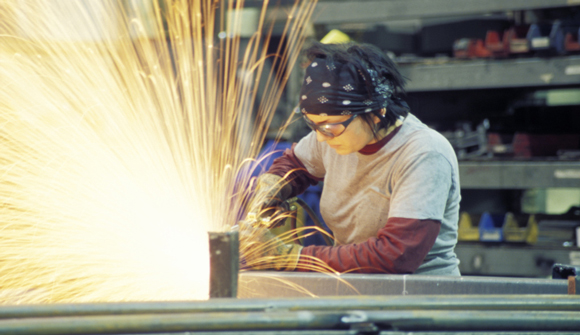 EDITORIAL
In Praise of Working People
By Wendy McElroy - January 29, 2015

A prominent difference between the 19th-century libertarian movement and the contemporary one lies in their attitudes toward working people. These are people who are not primarily interested in reading economic or political theory, but who focus their energies instead on making a decent living or raising a healthy family. These are intelligent people who understand the impact of laws and government on their lives, but who concentrate on controlling the more personal factors involved in their well being.

The 19th-century movement considered working people to be the best and firmest foundation on which to build a free society. The three periodicals that constitute a chronicle of earlier libertarianism – The Word, Liberty and Lucifer the Light-Bearer – consciously addressed the concerns of working men and women, rather than those of the elite. Indeed, both The Word and Liberty would probably never have existed if their future editors had not been active in the New England Labor Reform Association, which aimed at improving the conditions of the working poor. Even Liberty, which espoused the lofty-sounding 'philosophical anarchism,' did not talk down to the laborers who were subscribers. Instead, it went out of its way to include them, e.g. by creating a parallel German-language publication entitled Libertas so that the large number of German immigrants in factory jobs could access individualist-anarchist ideas.

By contrast, contemporary libertarianism often seems to dismiss working people, sometimes with disdain. Perhaps this attitude comes from the otherwise salutary influence of Ayn Rand and her portrayals of 'the solitary hero' who rises like cream from milk above the commonplace. Her novels portray 'the masses' in an incredibly unflattering light. Perhaps working people are underrated because the leadership of the movement is top-heavy with university professors and investment gurus, who tend to be divorced from many mundane concerns. Perhaps any political party that consistently receives a small slice of the popular vote would come to view 'the masses' with antagonism. Whatever the reason, the pages of the contemporary periodicals are far more likely to discuss the gold standard than the problem of day care for working parents. They are more likely to address the concerns of the successful businessman or an intellectual – that is, of the elite – rather than those of a single mother who must work two jobs to buy groceries and who lives in fear that the IRS will discover she is declaring only one income.

There is a tension involved in dismissing the concerns of working people. As libertarian strategy increasingly focuses on electoral politics, the success of the movement increasingly depends upon the good will and discernment of working people. The tension lies in the following question: How can an elitist movement garner the popular vote or otherwise expand beyond its white, middle-class boundaries?

Political strategists tell us that the masses are either uninterested in or unable to understand the libertarian ideology. Thus, it must be presented to them in a simplistic and often misleading manner by dealing only with certain well-chosen issues, like taxation, rather than with principles. Such strategists sift through libertarianism in search of popular issues and they discard the rest, in the belief that people will never notice any gaps in theory. Moreover, since working people are said to respond only to matters that directly affect their material well being, the popular issues are usually phrased in utilitarian/economic terms.

Are People Uninterested in Ideology?

The notion that 'the masses' are not interested in ideology is bizarre. The two most powerful and revolutionary social forces in Western history are both profoundly ideological and they were both embraced by working people: Christianity and Marxism. Although Marxism may have initially had the utilitarian lure of promising to increase the status and wealth of the proletariat, Christianity's appeal has never been economic. Moreover, the American Revolution – which many consider to be the defining libertarian moment in history – was a grassroots revolution that revolved around principles. In a famous passage, John Adams wrote, "What do we mean by the Revolution? The War? That was no part of the Revolution … The Revolution was in the minds of the people …" The event was sparked by specific events, such as the introduction of the Stamp Act, only because the groundwork of principles had been laid.

Arguably, the most successful libertarian cause of 19th-century America was also grassroots. It spoke to working people, often through a periodical entitled Working Man's Advocate. This was the land reform movement that grew under the careful stewardship of the libertarian George Henry Evans. Evans demanded that all land-titles be held by the people, not by the government, not by large business interests that enjoyed government privilege. In 1829, when Evans organized the Agrarian League, he commanded the attention of less than a handful of newspapers.

Within three decades, of the approximately 2,000 newspapers published in America, over 600 of them supported Evans's land reform. In 1862, Congress passed the first homestead law providing that any citizen who was either 21 years old or the head of a family could acquire title to a parcel of federal public land, not to exceed 160 acres. Unfortunately, Evans had died several years prior.

Other impressive accomplishments of 19th-century libertarianism relate directly to their appeal to the working person. For example, the adult education movement arose from the tenements of American cities, and had its roots in the working class Mechanics' Institutes and Working Men's Institutes of Scotland and England. The appeal of grassroots causes cannot be dismissed as a 19th-century phenomenon. Today, the most fruitful avenues for libertarian change may well be home schooling and the move to decentralize government that has gripped Western states such as Montana: Both have a grassroots appeal because they allow people to reassert control over their own lives.

Indeed, much of classic libertarian theory is based on trusting working people more than members of the elite. For example, the trial by jury lauded by Lysander Spooner was meant to place community opinion as a safeguard between the individual and the State. As Spooner explained, "The trial by jury is a trial by the country – that is, by the people – as distinguished from a trial by the government …. The object … is to guard against every species of oppression by the government." In short, trial by jury provided an institutional procedure through which the community passed judgment on the justice of government law.

Years later, the issue of an "educated jury" arose in the pages of Liberty: George A. Schilling suggested that the common man should not be allowed to judge the law because "juries drawn randomly from the population are not likely to be more just or intelligent than the whole body from which they are drawn." In response, Victor Yarros explained that the so-called commonness of jurors was the strength of trial by jury, not a weakness, because the jury represented "the country" in terms of "intelligence, opinions, and state-of-knowledge." Thus, no State law that was vague, unpopular, or counter to common sense could be enforced. Working people formed a barrier against State oppression.

Another reason working people are dismissed is because the elite believe they are too unsophisticated to grasp the political and moral principles of libertarianism. Instead, they must be spoon fed the philosophy, issue-by-issue. I think precisely the opposite is true. The principles are easier for people to grasp than the issues. Why?

Many issues require specialized information that working people lack because it is of little practical value to them. In a discussion about Bosnia, for example, people might require an extensive knowledge of that nation's history in order to grasp the points being made. But broad moral questions, such as whether murder is ever justified, do not require specialized information that is unknown to most persons. A philosopher may have given more thought to the question, but his reasoning and arguments come from observing the same human nature with which everyone is familiar. In short, moral and political principles offer the extreme advantage of requiring no specialized knowledge to be understood. This is why virtually all human beings come to some conclusion about the propriety of murder even though few may take a firm position on Bosnia.

Rather than present libertarianism through carefully selected and derivative issues, the rule should be: The more basic the political issue or principle, the more likely it is to be understood by most people and to appeal to their interests.

What Is it People Do Understand?

Working people may not understand the evils of Keynesian economics, or the complexities of chaos theory. But the people I talk to in coffee shops and grocery stores realize the repercussions that legislation will have on their lives and those of their children far better than university professors. Relatively recently, the media and political pundits have expressed astonishment at the public's reaction to the Clinton-Lewinski scandal: Namely, people refused to condemn Clinton with the knee-jerk moralism that had been predicted by the elite. Instead, regular people turned on the media and accused it of blatantly trying to manipulate them. Once more, the elite had underestimated the intelligence and common sense of 'the masses.' Or, perhaps, it had overestimated its own.

Another thing working people understand is when they are being spoken down to or otherwise dismissed. This is particularly true of minorities who are sensitive to social abuse and recognize it in a flash. Again, a tense question arises: How can a white, middle-class movement (libertarianism) expand its appeal without respectfully addressing the issues of burning concern to minorities? These people should be a natural constituency. After all, minorities are the greatest victims of the welfare state and of social programs with racist aspects, like the war on drugs. Hispanics and blacks already view the political system with such profound suspicion that they are far less likely to call the police than whites. Yet they are no more friendly to libertarianism. And why should they be? The movement makes no attempt to represent them.

The principles of libertarianism – the same principles that sparked the American Revolution – appeal to working people. In the 18th and 19th centuries, this appeal was the movement's strength. In the 20th century, libertarianism seems to have deliberately cut itself off from its roots. No wonder it has difficulty growing.